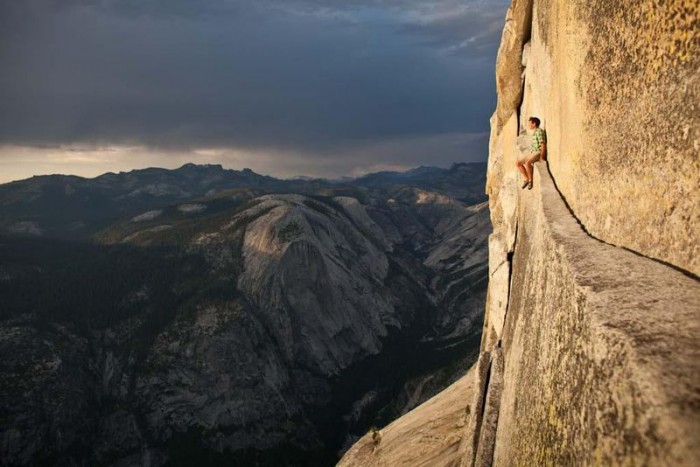 There are rock climbers, and then there’s Alex Honnold.

There is no adrenaline rush. If I get a rush, it means that something has gone horribly wrong. Because the whole thing should be pretty slow and controlled. I mean, it’s mellow.

Surviving on less than $1,000/month and living out of his white van, Honnold is a rock climbing prodigy. Armed with nothing more than rubber shoes and a bag of chalk, he tackles walls thousands of feet high. Without a rope. It’s called free solo climbing, and it’s one of those sports that, even here at the Nerve Rush headquarters, we cringe when thinking about it. It’s not like Alex is unqualified to do what he does. He started climbing indoors at the age of 11 and was there 3 hours a day, 6 days a week honing the physical skills and mental fortitude required for such a demanding sport. At the age of 19, Honnold dropped out of his engineering courses at UC Berkeley to devote 100% of his time to rock climbing. By the time most of us heard about him, he had completed more than 1,000 free solo climbs.

His toughest climb to date, featured in the film Alone on the Wall, was a free solo ascent of the northwest face of Half Dome, a 2,000 foot granite behemoth in Yosemite National Park.

[images via Wikipedia and National Geographic]