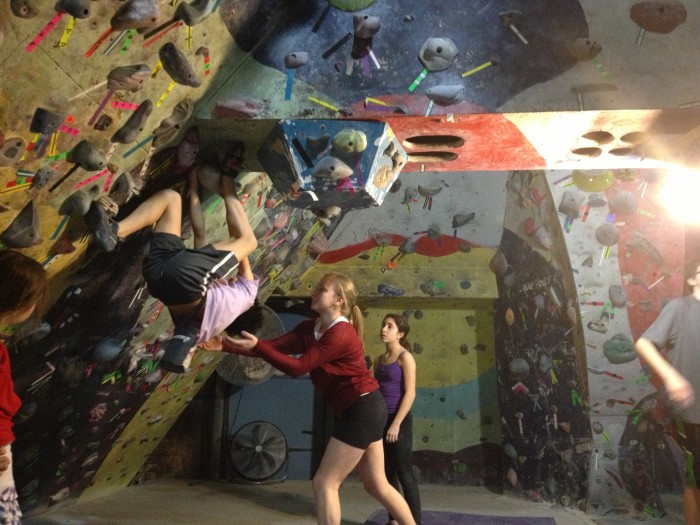 Michaela Kiersch [18] stared up at the colorful holds towering over her at a 40-degree angle. Around her, kids moved with the agility of monkeys up and down the walls, swinging, falling and hanging upside-down. “Dave, I’m gonna need a spot on this one,” Kiersch shouted across the chaos.

She dusted some climbing chalk off of her black, yoga pants while she waited for coach Dave Hudson, an up-beat man with shaggy blond hair, to saunter over. Kiersch sat down, facing the wall and placed her feet on two holds. Her callused hands grabbed a higher hold and she began to move up the wall. She ascended slowly, but consistently, crossing foot over foot, hand over hand. Her muscular back flexed under her blue sports tank as she danced with the wall, her long, blonde ponytail swinging with each reach. Hudson stepped under her, supporting her with both hands, in case of a fall, but she never faltered. She finished the route and dropped to the mat with a thud.

Hidden Peak Climbing Gym sits in the basement of a gymnastics facility in Goose Island, Chicago. A light dusting of chalk coats every shoe, couch and person in it. It’s about the size of a one-bedroom apartment and a wet spot appears on the carpet in the far corner of the room every time it rains. It’s a rough replacement for the soaring, granite domes of Yosemite or the steep, quartz cliffs of New York’s Gunks, but Chicago offers its climbers virtually no natural rock. Even without miles of mountains and boulders, this grungy rock gym turns out climbers strong enough to win national competitions. Kiersch is one of them.

“At competitions, while you’re competitive, you’re cheering for your competitor… almost to do better than you. You want them to accomplish things that you know are pushing their limits,” said Kiersch. “It’s a really supportive community and I love that about it.”

Even though she prefers sport climbing for its one shot, all or nothing opportunity at competitions, she’s training for the Open and Youth American Bouldering Series Nationals, held in Colorado Springs February 22-23 and March 1-3.

Training involves three hours, four or five days each week, often focused on the same wall for 40 or 50 moves. Exercises cover everything from timed climbing circuits to chin-ups and pushups. Hudson sets new routes for his climbers every week. For Kiersch, the most challenging part of preparing for the 2013 American Bouldering Series was keeping momentum after a draining sport climbing season that spanned from February until October 2012. Her mental and physical exhaustion contributed to a rocky start, heading into her last youth bouldering season. Despite her shaky beginning, she’s stuck to a strict training schedule and hopes to do well at bouldering nationals.

When she’s not training herself, Kiersch helps Hudson coach the rest of the youth team. Sophie [8] and Lila [10] admire Kiersch’s ability and encouragement. Both agree that Kiersch will sweep nationals. “I mean she is the 16th best climber in the world,” said Lila. “She’s my best climber,” said Sophie.

Kiersch credits Hudson for the strong youth climbers coming out of Chicago in recent years. He trained Isabelle Faus and Kasia Pietras, who often make climbing news for difficult bouldering sends across the country. Though she started at a different gym, she headed to Hidden Peak in 2006 in search of Hudson’s training. Hidden Peak youth climbers often outperform those from other gyms with advantages of natural rock and larger facilities such as those in Boulder, Colorado.

“I give Dave all the credit,” said Kiersch. “Our practices are more structured than the other teams [around the country]. He always comes to practice with a game plan: something we’re going to do and a reason it’s going to work.”

Manager and coach Hudson has called Hidden Peak his home gym for over 15 years. He started climbing after college and broke into the climbing industry, managing gyms in California and Utah before returning to his hometown of Chicago.

“The climbing scene in Chicago is a good one and smaller than some cities, but it’s no longer ‘small’ anywhere these days with the strong growth in the sport over the last 10 years,” said Hudson who loves the size and culture of Hidden Peak, in particular. “The Peak is great because it has that old school, almost co-op feel and friendliness.”

Despite the strong cultural environment at Hidden Peak, Chicago climbers like Kiersch are starved for natural walls. Kiersch, along with other Hidden Peak members, often drive seven hours south to Kentucky’s Red River Gorge on a Friday evening, set up a tent in the middle of night, wake up, climb, sleep in a tent again and pack it up in the morning to drive back after another half day of climbing on Sunday. “Climbing outside is a nice oasis,” said Kiersch. “You get to warm up at your own pace instead of doing drills. You give it a good attempt because you want to, not because you have to.”

The sport has seen a recent surge in gym climbing popularity. One thousand people take up rock climbing every day at U.S. climbing gyms. This trend will likely continue if rock climbing is accepted as an Olympic sport. Kiersch also believes that the acceptance of rock climbing into the Olympics would bring the sport to more college campuses, resulting in college scholarships. Even though she’d love to pay for college with a climbing scholarship, she worries that a newfound popularity would change her sport’s culture.

“I look at climbing as a giant family, but if it grows we won’t be able to get as close to each other because there will be so many people,” said Kiersch. “It will be about winning and the glory of being the gold medalist instead of accomplishing something great.”

While enthusiasts rally for the sport to be the next Olympic game, Kiersch will keep climbing routes in the grungy basement gym of Hidden Peak. Even though she spends majority of her time on the same, sloped wall, Hudson habitually switches up his the routes, bringing new challenges to his Chicago team.

“I love that the movements are different every time you climb and there’s no limit to it,” said Kiersch, sitting in her tiny, home gym that she’s come to over 100 times in the last six months. “There’s always going to be something harder to climb.”