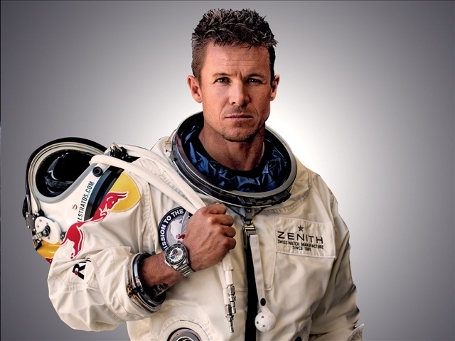 Felix Baumgartner (born 20 April 1969) is an Austrian skydiver and a BASE jumper. He is renowned for the particularly dangerous nature of the stunts he has performed during his career. Baumgartner spent time in the Austrian military where he practiced parachute jumping, including training to land on small target zones.

In 1990, Felix got bored of traditional skydiving and felt that he had done everything he could with the sport. At that point, he decided to branch out into BASE jumping. According to Felix, the “lightning-fast reflexes and precise techniques required by such low-altitude feats also enhance his high-altitude skydiving technique.”

Felix kept pushing the limits and in 2003, he became the first person to skydive OVER the english channel – you heard that right – over the English Channel, using a specially modified carbon-fiber wingsuit.

On October 14th, 2012, after 7 years of planning and a 2 1/2 hour ascent, Felix jumped from over 24 miles above earth and broke 3 world skydiving records in just over a 10 minute period with the Red Bull Stratos project. This is his most well-known daredevil feat to date, although he’s accomplished quite a bit in his 43 short years. 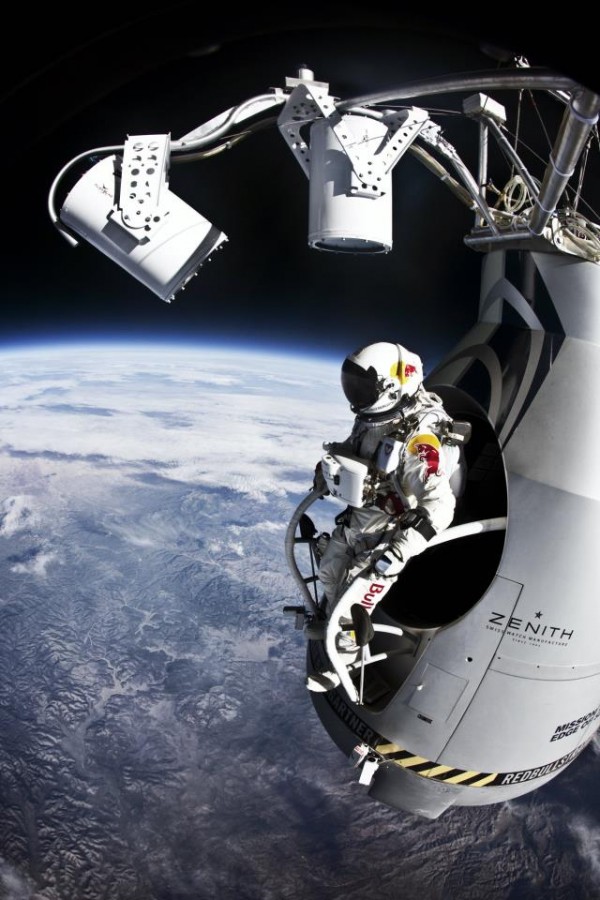 Felix Baumgartner standing on the edge of space…literally.

In October 2012, Felix set out with Red Bull to skydive from 22 miles above the earth’s surface as part of the Red Bull Stratos project. The project was ambitious for multiple reasons – both physically and technologically – as the Red Bull team set out to break four world records that have lasted for over 50 years.

The world records they hoped to achive were as follows:

The project was 7 years in the making and they recruited previous skydive recordholder, Joe Kittinger to be Felix’s mentor throughout the project. You can get a small taste of what was involved with the perparations of the Red Bull Stratos project by watching this short test jump from ~71,000ft that Red Bull filmed in March.

[Nerve Rush’s own coverage of the Red Bull Stratos Project can be found here.]

The Red Bull Stratos team began another attempt on Sunday, October 14th, 2012. The capsule was launched at 9:30 MDT After a nearly 2 1/2 hour ascent in the capsule and nearly 7 years of preparation, Felix made the historic jump from approximately 128,000 feet – a little over 24 miles above the earths’ surface.

While standing on the edge of space outside the capsule, Joe Kittinger radioed to Felix

“Start the cameras, and our guardian angel will take care of you.”

As he prepared himself for the jump, Felix radioed back to the base, right before stepping off:

“I know the whole world is watching now. I wish you could see what I can see. Sometimes you have to be up really high to understand how small you are… I’m coming home now.”

With that, he took one more step and off he went. The start of his 4-minute long free fall. Here’s the footage of that jump. This literally takes my breath away every time I watch it.

Baumgartner’s jump was 65 years to the day after Chuck Yeager broke the sound barrier for the first time in an piloted aircraft(October 14, 1947,). Now, of course, there’s much more to Felix’s jump than just this. The live jump was viewed simultaneously by over 8 million people – the most ever viewers for a live streamed event. If you missed the entire event, you can water the entire video of  Felix Baumgar’s Red Bull Stratos Skydive Jump below:

As incredible as that video above was, it’s tough to really get a sense of what Felix got to experience himself. After all, all we can tell through the other video is a tumbling white speck on a a black background. Fortunately, Felix’s entire outfit was outfitted with onboard cameras capturing every angle of the freefall. While much of this footage is exclusive and going to be used for a documentary about the entire experience, Red Bull has released a small portion of this exclusive footage and we at Nerve Rush are bringing it directly to you. Here it is. Enjoy. 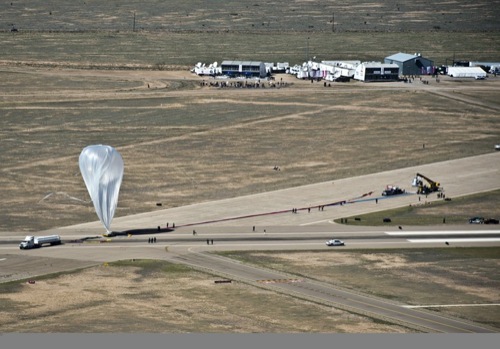 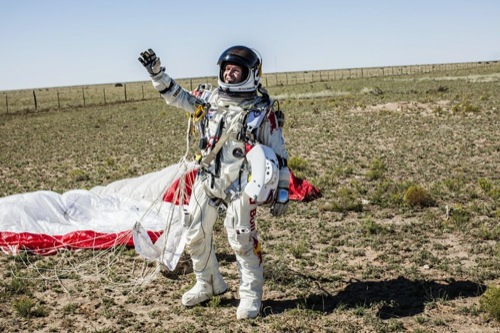 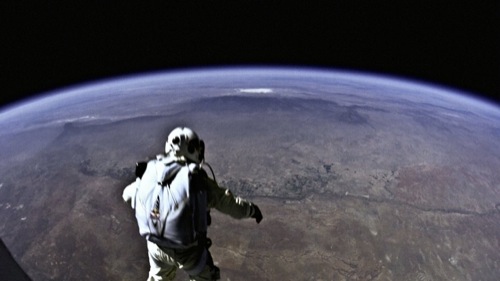 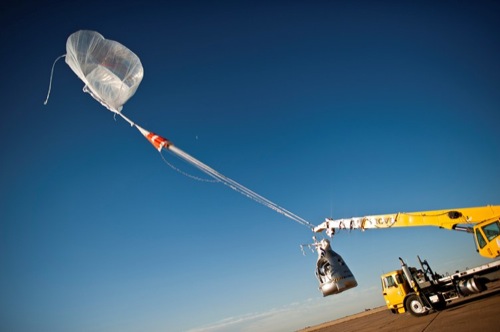 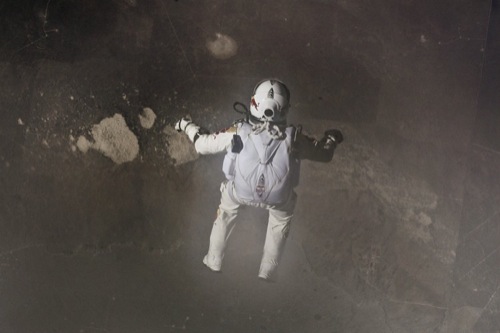 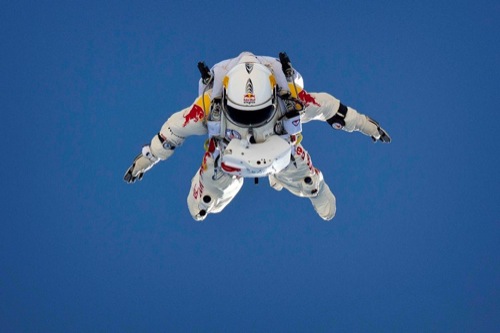 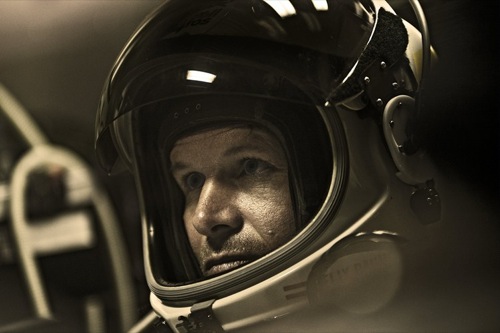 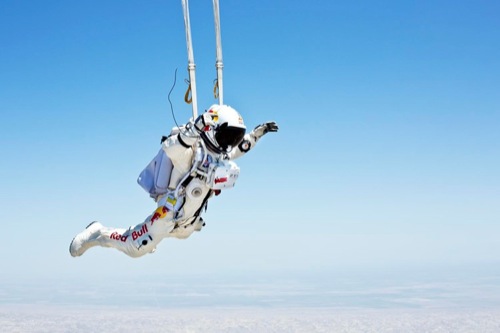 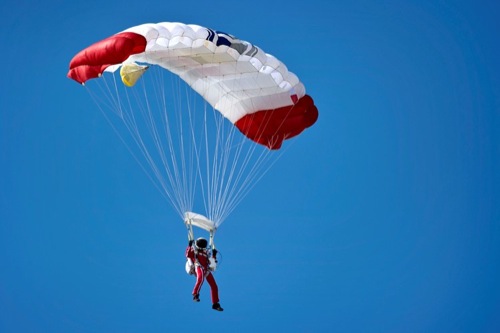 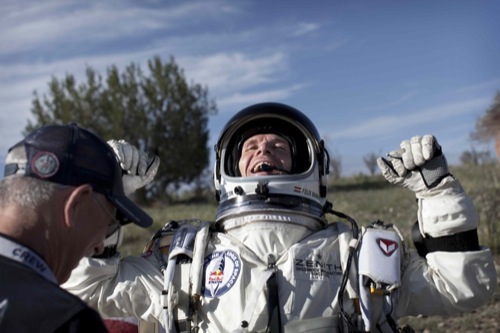 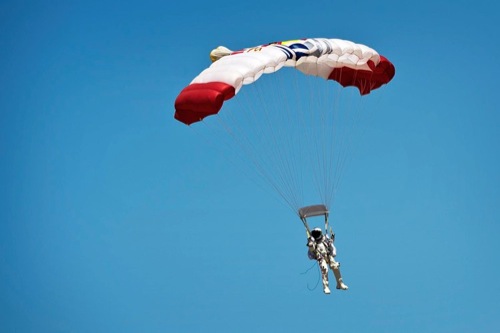 Felix’s Interview on the Today Show

Felix Jumps From The Petronas Towers in Kuala Lumpur Malaysia

As it stands, the “final” statistics on Felix’s jump are as follows:

Those numbers were good enough to break the following records:

Felix and the Red Bull team broke three out of the four records they set out to break.

The only record they failed to break was Joseph Kittingers’ longest time in free fall. That record stands at 4 minutes and 36 seconds, a full 17 seconds longer than Felix’s jump. This was most likely due to the fact that he utilized a drag chute which slowed him down throughout the jump. Felix’s speed (830+mph) was much greater than anticipated and his fast rate of falling meant he most likely would not have been able to break the record without sacrificing his free fall speed.

The Red Bull Stratos jump also set the record for livestream with the most concurrent viewers at one time with over 8 million viewers tuning in.

Felix’s jump also inspired several other, shall we say, smaller folk to undertake their own “miniature adventure.”

On October 14, 2012 as part of the Red Bull Stratos project, Felix achieved the following records:

Felix was in freefall for the second longest time of anyone ever – 4 minutes and 19 seconds – just 17 seconds shy of Joseph Kittinger’s (Felix’s mentor) record in 1960. 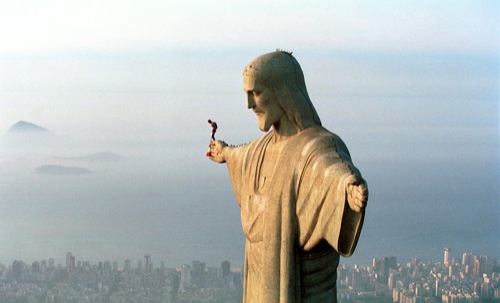 Felix Baumgartner BASE Jumps In Rio

Felix Jumps Off Forth Road Bridge In Scotland

Information about Felix abounds on the internet – especially given his recent notoriety thanks to the Red Bull Stratos project. The following links are great resources if you’d like to learn more about Felix Baumgartner: the man who broke the sound barrier.