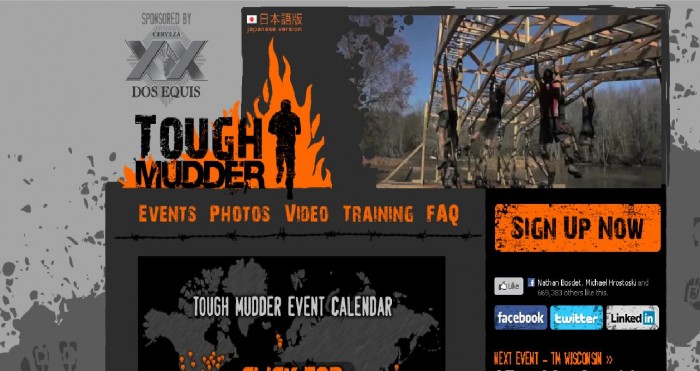 This is a Nerve Rush reader experience post. We’ve profiled the Tough Mudder before, but facts only do so much to tell you about the level of adventure in an obstacle race. So loyal Nerve Rush reader Mike Hrostoski took it upon himself to jump in and find out for himself. Take it away Mike!

Sometime this past spring, my friends Hannah and Lauren asked me if I wanted to run a Tough Mudder race with them. I recall the conversation over Facebook going something like this:

Them: Hey, want to run Tough Mudder with us?

Me: Huh? Tough Mudder? What is that?

Them: It’s a 10-12 mile endurance event with obstacles designed by British Special Forces. We’ll run through miles of mud, crawl through underwater pipes, run up and down ski slopes, jump into a freezing cold river, climb a glacier, carry a log up a mountain, run through fire, and finish the race running through live wires with 10,000 volts of current running through them.

Fast forward to May 8, 2011 and I found myself staring up the slopes of Mt. Snow, VT with four other teammates. I came in with pretty high expectations of the race. I work out regularly, do yoga, and eat pretty well. I ran a half marathon lat October with no training and that was 13.1 miles. The Vermont Tough Mudder was only 10 miles so it couldn’t be that rough right?

I was dead wrong. The first mile or so was straight up the mountain. We ran up and down the entire length of the mountain multiple times. In between running up and down ski slopes we dunked ourselves into freezing cold water time after time.

At around mile 6 I had my first cramp. My calf completely locked up when I was pushing hard up a hill. I’ve gotten these before playing basketball so I just stretched it out, drank some more water, and pushed on. At around mile 8 the other calf locked up. A couple hundred meters after that my legs literally stopped working. They were completely cramping up from top to bottom. I’ve never experienced anything like that before. Soon I found myself on an ATV ride to the medic tent where I laid under heating blankets, ate a couple bananas and three Myoplex shakes, and drank around a gallon of water before I could even walk again. Bad times.

Looking back at the race I realize that I didn’t drink anywhere close to enough water as I should have. And my training was basically non-existent. You know what the late, great John Wooden said, “Failure to prepare is preparing to fail.”

Today is exactly six months from the day that I ran my first Tough Mudder. This Sunday I’ll try it all over again at the Tri-State Tough Mudder in my current home state of New Jersey. Big thanks to the Tough Mudder team for letting me run this one for free on a press pass. See, there are some perks to being a “published writer.”

I’m feeling pretty good about this upcoming race. My diet has been super on point lately with my November Detox (I actually created a daily journal for it at: bit.ly/november-detox). I’ve also been training way harder than I did for the last race. In fact, I’m feeling good enough to even say:

In a couple days I’ll be finishing the Tri-State Tough Mudder and checking another item off of the List of Adventure. Guaranteed.

I did it. I finished the Tri-State Tough Mudder. I barely finished, but I finished. Here’s how it all went down.

I’ve been detoxing for the whole month of November, so to carb up the night before I ate the equivalent of a meal for three including an entire baking pan worth of sweet potato and pineapple casserole. Half of an entire pineapple and three sweet potatoes all cut into slices and baked in the oven for an hour with butter and cinnamon on top. All the dessert you need without any refined sugar. So delicious. I then got to bed super early and slept a solid ten hours with sweet dreams of running, jumping, crawling, and mudding (Really, I dreamt about the race the whole damn night).

The morning started off like any other morning in November: 4 eggs, a whole pink grapefruit, and some yoga. I stopped by a convenience store to grab a bottle of water and three protein bars and hit the road for Raceway Park in Englishtown, NJ.

When I got to the race site I was pleased to see flat land for as far as the eye could see. The Vermont Tough Mudder was nothing but running up and down mountains for ten torturous miles. NJ 1, Vermont 0.

After signing my death waiver and checking in at the Media Check-In tent, I walked into the park to check out the scene. Pop quiz: What’s the main difference between an average New Jersey Tough Mudder and an average Vermont Tough Mudder? Around 20 pounds of muscle and no shirt. Why people in New Jersey are so jacked I don’t know, but there were plenty of guys running around that looked like Rambo. Of course I took the opportunity to join the shirtless New Jersey Tough Mudder crew, but kept my secret identity intact with the Luchador mask that has now traveled all over the world with me.

Shortly after I checked in, I met up with my friend Lauren from the first Tough Mudder adventure and her friend Melanie. As soon as I met Melanie I knew we were going to get along. She had a red bandana on and a t-shirt that read “It’s The Freakin Weekend.” My kind of people. After the obligatory pre-race photoshoot to post Facebook pictures later, we lined up at the start. We walked up to the start just as the last heat had taken off so we got to line up in the front of our heat.

After pumping us up with a little pre-race pep talk and reiterating the fact that we signed a death waiver, the emcee let us loose on the course. Unlike a usual race though, we started by chasing a monster truck. And since we were in the front of our heat, I started the Tri-State Tough Mudder sprinting behind a monster truck.

I could explain the rest of the thirty-something obstacles in detail, but it’s easier to read about them all here on the Tough Mudder website: Tri-State Tough Mudder Course Map

Tough Mudder is also a great experience because of the tone that the race organizers set at the beginning of the race. All participants raise their right hand and recite the Tough Mudder pledge before they run the course. The pledge is: “As a Tough Mudder I pledge that… I understand that Tough Mudder is not a race but a challenge. I put teamwork and camaraderie before my course time. I do not whine – kids whine. I help my fellow Mudders complete the course. I overcome all fears.”

I can’t even count the number of times I got a helping hand from a stranger pulling me through a dark muddy tunnel or pushing me up a 12 foot wall. In return I helped dozens of people over and under the obstacles. In a Tough Mudder race you aren’t running against the other participants, your running with the other participants and against the course. It’s really a great atmosphere.

Of course the most memorable part of the day was crossing the finish line. The feeling of stepping across that line was such a great sense of accomplishment. For those 10-15 minutes after the race I felt nothing but pure happiness. My body was on the verge of failure again, but I just felt great.

Completing the course has also set the baseline of what I know I can accomplish at a higher level. Several years ago I ran my first 5k. A year ago I ran my first half marathon. This weekend I ran a half marathon through hell. The next race will be a little harder,  a little longer, or a little tougher, but I know I’ll be able to do it. Success breeds success and right now I’m on a roll…

We can’t wait to see what you do next Mike. Hopefully you’ll be able to share it with us (ahem, skeleton tryouts?). We couldn’t agree more – you’re on a roll!

This post originally appeared on Michael’s own blog (first post, second post). Massive thanks to Mike for sharing this with the wider Nerve Rush audience. If you’re interested in guest posting on Nerve Rush with your own adventures or expertise, let us know – we’re always on the lookout for adventurists doing incredible things. Get in touch.