Los Angeles, otherwise known as the City of Angels, is the largest city (geographically) in America and the cultural hub of southern California. Popular destinations include Hollywood, Venice Beach, the Getty, Universal Studios, and the list goes on… but, a lesser known fact that some people are not aware of is that Los Angeles is, and always has been, a prime location for extreme sports.

Sure, there’s not much river rafting in the city, but it makes up for its lack of waterways with a bounty of other options. First and foremost, this is southern California we are talking about; so lets talk about the surf. You can surf anywhere along the coastline in LA and find good spots, but most people opt for County Line. It has the characteristics of most southern California breaks – low power and good form.

If you’re someone who would rather dive, the massive kelp forests just off the coast are home to hundreds of different species of marine wildlife. In Santa Monica, Point Dume has all kinds of local wildlife and plant life. You can see lobster, horn sharks, lingcod, Cabazon and much, much more. You can charter a boat, or, if you don’t mind a little extra swimming, you can wade on in from the beach. 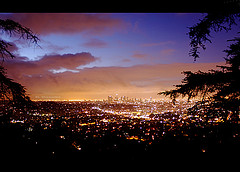 If you’re a bigger fan of sky than ocean, you can take paragliding classes at Oxygen Paragliding. They run both tandem and guided trips, so whatever your skill level is, they’ll have something for you. If you’re a bigger fan of falling out of the sky than gliding through it, you can go bungee jumping with Bungee America. If you’re a skater, than head on over to Skatelab. Not only is it a free and public skate park, but the Skatelab is also home to the skateboarding hall of fame and receives over 50,000 visitors each year. If you’re trying to get through the city on foot, then consider taking parkour lessons at Tempest Freerunning Academy. If you are a climber, then there’s going to be a lot for you to do in southern California. I highly recommend the indoor climbing at Hangar 18 and, if you don’t mind a little drive, checking out the world-famous Joshua Tree. If you’re into mountain biking, check out the Backbone Trail in Santa Monica. It’s a small network of trails that runs through the coastal hills.

The urban sprawl that is Los Angeles is often looked at as the sort of place where everyone drives cars and works in Hollywood, but there is so much more when you know where to look. This city in the desert of southern California is an oasis for action sports enthusiasts. Come see the extreme sports in Los Angeles.