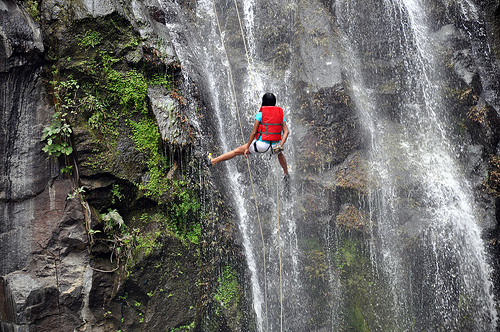 So, you’re a self-proclaimed adrenaline junkie. Normal sports don’t cut it, and staying inside on a sunny day might as well be hell-on-Earth. Fortunately, the folks at Nerve Rush HQ know exactly where you’re coming from. We put together this list of adrenaline junkie activities to help guide and inspire you to push your limits, step outside of your comfort zone and experience the extreme.

Rock climbing is a sport that can be as extreme as you want to make it, which is why it attracts some of the most intense daredevils in the world, as well as folks who just want to get some exercise with a nice view. Humans have been scaling rock walls for as long as we’ve been around, making climbing a likely candidate for the first sport known to humanity. There are lots of different types of climbing.

BASE is an acronym for Building, Antenna, Span, and Earth, which are the categories of fixed objects that BASE athletes can attempt jumps from. It’s not exactly a secret that BASE jumping, statistically speaking, is one of the most dangerous sports in the world, but that doesn’t mean you shouldn’t give it a shot if it appeals to you. There are excellent resources available today for BASE jumpers, from highly advanced gear to in-depth BASE jumping courses led by the world’s best professional BASE athletes.

Mountain biking is another one of those adrenaline sports that you can do at your own pace and have a great experience no matter what. Mountain bike routes are typically off-road and lead through varying types of terrain. Some people enjoy a slower ride on easy trails, while others want to push their limits to the max. If you are looking to get into an activity that will push you physically by improving your endurance and increasing your overall strength, as well as force you to be strong mentally and overcome challenges, then this could be the perfect sport for you. One of the things that new mountain bikers like most about the sport is that getting started is quite easy. All you will need is a basic bike made for off-road use and a few pieces of safety gear (don’t forget that helmet!).

Surfing is one of the most popular water sports in the world, and for good reason. Getting started is as simple as getting a surfboard, some basic instruction, and hitting the water. There are many types of surfing, including short boarding, long boarding, and other variations such as paddleboarding, body boarding, stand up paddle surfing, and more.

Mountaineering encompasses a wide range of sports, all of which including the climbing of mountains on trails or on faces that require technical climbing. These routes will commonly be over rock, ice, or snow. Mountain climbing is one of the oldest sports in the world and only continues to grow in popularity as time goes on.

>> Our list of The 14 Highest Peaks In The World
>> Ueli Stick’s speed solo of the north face of the Grand Jorasses
>> A crazy, fast climb up the Eiger

When we try to think of a sport that has exploded in popularity over the last few years, obstacle racing is what comes to mind. Obstacle Races can take on many forms and even different themes, and last anywhere from as little as 30 minutes to several days.

Are you an obstacle race administrator? Add your event to our database here.

The ultramarathon scene is another that has become quite mainstream over the last decade. Ultramarathon races are classified as any event that requires a runner to cover over 26.2 miles, the length of a traditional marathon. Ultramarathons often take place over mountain trails and other rough terrain, which only adds to their intrigue and attracts some of the world’s most seasoned endurance athletes to this incredible sport. Ultras take place on every continent (yes, even Antarctica), and range in length from just over marathon distance to hundreds of miles long.

Always wanted to explore mysterious underwater worlds? Scuba diving is your dream come true. Scuba stands for Self-Contained Underwater Breathing Apparatus, which is piece of equipment that scuba divers use to breathe underwater. Divers carry containers of gas with them during dives, which contain the compressed air they breathe, and wear fins on their feet for improved movement. There are great scuba diving companies all over the world that can guide you through your first dive.

Skydiving is often one of the first very extreme activities people try out, as trying it is as simple as signing up for a jump through one the countless skydiving companies around the world. New skydivers will complete tandem jumps with instructors, while those looking to pursue skydiving more seriously can eventually get their own gear and learn to complete solo jumps. Skydiving is also the fastest way to become a BASE jumper. If you’ve been craving some serious heights and to feel what freefall is like, skydiving is the thing to do. 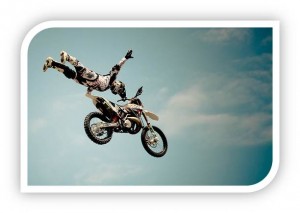 Here at Nerve Rush, we took the time to put together an unofficial extreme sports list for your viewing pleasure. Consider it our attempt to catalog all things adrenaline in one central location. There’s sure to be some activity on this list that will get your heart pumping.

Barefoot Water Skiing:  It is a nothing but water skiing, but the only difference is that the person behind the motorboat does not have skis. The person is barefooted here, which makes it necessary for the skier to travel faster than the speed involved in regular water skiing.

Buildering:  Climbing the outside of buildings and other artificial structures.  It is done without ropes or protection far off the ground. It is often practiced outside legal bounds, and is thus mostly undertaken at night-time.

Cliff Jumping:  The height from which one jumps is lesser in comparison to skydiving. The feeling of entering water followed by jumping from a great height can be absolutely thrilling.

Coasteering:  Came about through climbers scrambling around sea cliffs to discover new climbs. They then decided that it was quite good fun just to do the scrambling bit. Add a wet suit, helmet and buoyancy aid and you are ready to learn how to jump off towering cliffs, forge through pounding surf and explore hidden coves

Downhill Skiing: Skiing involves the use of planks (under the feet) and poles (in hands) to slide down a snow-clad mountain slope. The speed which one gathers as he/she slides downhill triggers an adrenaline rush.

Freediving:  A form of underwater diving that does not involve the use of scuba gear or other external breathing devices, but rather relies on a diver’s ability to hold his or her breath until resurfacing. Examples include breath-hold spear fishing, freedive photography, apnea competitions, and to some degree, snorkeling.

Freeskiing/Freeride:  Involves taking the tricks done in the park to the rest of the mountain and the backcountry. Thus, fatter skis may be used to float on top of the powder. Freestyle skiing often involves steeps, cliffs, powder, and glades.

Gliding:  A glider is used for this activity by pilots. These gliders use rising air for gaining altitude.

Mountaineering: Climbing mountains the hard way with an ice axe, crampons, cams, and rope.  It is simply challenging and difficult hiking up steep rocky slopes, talus fields, and along airy ridges.

Paintball:  A game in which players compete, in teams or individually, to eliminate opponents by tagging them with capsules containing water soluble dye and gelatin shell outside (referred to as paintballs) propelled from a device called a paintball marker (commonly referred to as a paintball gun).  Rules for playing paintball vary, but can include capture the flag, elimination, ammunition limits, defending or attacking a particular point or area, or capturing objects of interest hidden in the playing area.

Riding an Edge Coaster:  Uniquely the world’s very first and only amusement ride of its kind, it goes around the edge of the Crown Regency Hotel & Towers’ building while riders are locked onto a rail seat. High above, riders can indulge in a breathtaking panorama of the entire Cebu landscape 130.84 meters above ground.

Ropes Course:  A challenging outdoor activity which usually consists of high and/or low elements. Low elements take place on the ground or only a few feet above the ground. High elements are usually constructed in trees or made of utility poles and require a belay for safety.

Shark Dive:  Puts the diver inside a cage.  Right in the middle of circling sharks and an array of fish.

Snorkeling:  Swim fins and a diving mask is used to do snorkeling. This is a very well-known activity where the diver goes underwater to observe marine life.

Zip-line:  Consists of a pulley suspended on a cable, usually made of stainless steel, mounted on an incline. It is designed to enable a user propelled by gravity to travel from the top to the bottom of the inclined cable by holding onto, or attaching to, the freely moving pulley.