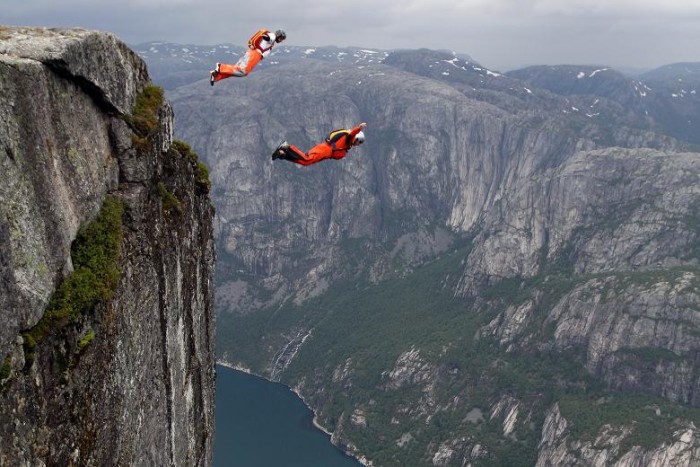 Our Favorite (Illegal) BASE Jumping Locations

The legality of BASE jumping is something that has been an issue for lovers of the sport since day one. While virtually any surface high enough off the ground for a safe jump can serve as a place to BASE jump, many jumpers often run into trouble with the law and end up with citations, permanent bans from certain areas, or even some time in jail.

While there are certainly a lot of great places where BASE jumping is allowed, some of the best jump locations in the world are officially illegal to use, causing determined jumpers to conveniently ignore the law and go for their jumps anyway. We’ve listed a few of our favorite illegal places to BASE jump below.

El Capitan is arguably the most recognizable huge rock face in America, and is where the first BASE jumps ever took place in 1966. Located in the legendary Yosemite National Park in California, this giant monolith offers daring BASE jumpers are 3,000 foot vertical drop. BASE jumping is strictly prohibited in all U.S. national parks, but that doesn’t stop some athletes from taking a leap off the famed wall.

Mount Thor is a seriously epic mountain located on Canada’s Baffin Island, within the limits of Auyuittuq National Park. The mountain features the greatest vertical drop on the planet at 4,101 feet.

The Cave Of Swallows

Featuring the largest cave shaft in the world, the Cave Of Swallows in Mexico is a popular place for tourists and adventure sports enthusiasts alike. BASE jumping is officially not allowed, but many jumps have taken place at the cave, which offers up a truly one-of-a-kind 1,092 foot freefall into the earth.

The Troll Wall is the highest point on the imposing Troll Peaks, which are located along the Norwegian coast, and is the tallest face of vertical rock in Europe with a 3,600 foot drop.

In 1992, BASE jumpers Glenn Singleman and Nic Feteris set a world record for the highest starting elevation for a BASE jump, and they did it from the top of the Trango Towers in Pakistan at a dizzying 19,537 feet. Their record stood for over a decade. The Trango peaks are some of the most sought after climbing and adventuring destinations in the world.

Several permitted BASE jumps have taken place at Burj Khalifa, including the record setting 2,717 foot drop by Fred Fugen and Vince Reffet from the top of the tower in 2014, while a handful of other jumps have been completed outside the limits of the law. Some athletes have even entered the building in disguise in order to gain access!

These are just a few of the best illegal BASE jumping locations in the world. As awareness about BASE jumping continues to grow and athletes forge ahead by pushing their limits and educating the public about the sport through their perpetual epicness, we can only hope that more and more legal jump locations continue to open up across the globe. Maybe even some of the locations above will be open to all BASE athletes someday!

Latest posts by Nate Damm (see all)
Posted in: Sky / Tagged: BASE, base jumping, BASE Jumping Locations, places to BASE jump