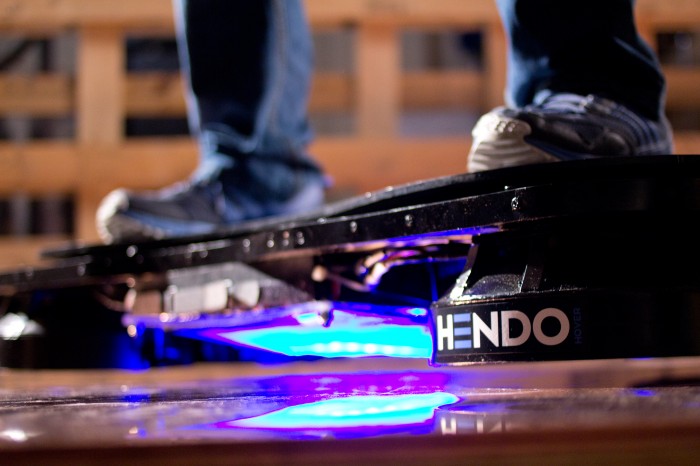 In one of Silicon Valley’s most remarkable (and eagerly anticipated) feats of innovation, a small but passionate team has resolved the issues surrounding hover technology by using magnetic field architecture (MFA™) to transmit electromagnetic energy more efficiently than ever before possible. As proof of concept, the company — Arx Pax — has created a working hoverboard prototype called Hendo, as well as Hendo Hover Engine developer kits, both of which are part of the rewards program in its Kickstarter campaign to raise $250,000.

According to founder and inventor Greg Henderson, “About two years ago, we began investigating MFA and hover technology as a better way to build, move people and move materials. During our research, we discovered a way to transmit electromagnetic technology that is far more efficient than anything else. This means that our patent-pending Hendo Hover Engine technology can enable platforms to hover over non-ferrous materials with payloads of virtually any size and weight.

“While the possibilities are both exciting and nearly limitless,” Henderson continued, “we decided to build a hoverboard prototype and hover engine developer kits right out of the gate. Our hope is that the Hendo Hoverboard will generate excitement, enthusiasm and financial interest from people who want to see it brought to fruition, and that our hover engine developer kits will spark the imagination of millions of potential inventors of other hover technology solutions. It is still early days, but we are absolutely thrilled because we have proven conclusively that what was widely considered impossible is, in fact, possible.”

Because of the elaborate Funny or Die prank video on HUVr Tech last spring, Arx Pax is inviting the media to its offices to see and touch the working Hendo Hoverboard prototype over the next two weeks. If you are a professional journalist interested in seeing a live demo at Arx Pax and talking to the founders, please click here.

Arx Pax was founded in 2012 to bring to market innovative technologies aimed at making our world a better place to live, work and play. The scientific breakthroughs generated at Arx Pax will make the impossible possible, inspire co-creation on a global scale, and ultimately create meaningful change in the world. Learn more at www.hendohover.com, or on Twitter @hendohover.

Latest posts by Alan Perlman (see all)
Posted in: Wheel