Massachusetts was graced with some great little climbing areas which happen to be not too far from the Boston area. Although the tallest climb is only around 150 ft., this area tends to be considered a training area for most locals. However if you’re looking to experience some of the historic rock climbs that have been around since the early 1900’s this list will be a great starting point!

Quincy Quarries is a great rock climbing spot. With multiple top rope routes and bouldering problems at varying difficulty, climbers of all experience levels can enjoy! The area is about a half a mile in length with the different wall offerings.

Another popular rock climbing area, Hammond Pond is located near Boston by the Chestnut Hill shopping center. Climbing here dates all the way back to the early 1900’s and consists of about 14 crags with some great bouldering in the Alcove. There is also a cave called Hermit’s Cave which features some good underclings that you must try! 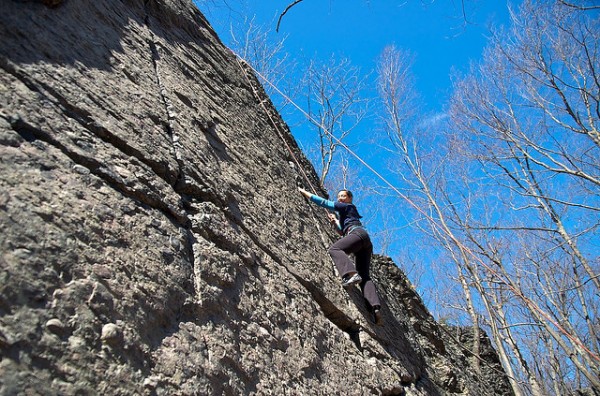 Located an hour west of Boston in Leominster State Forest, features a variety of 32 routes that include trad, sport and top rope. Many of Crow Hill’s cracks and faces are east-southeast facing and situated on a hillside, causing the grainy rocks to seep and hold moisture longer than other areas in New England. The season here varies and can begin in either March or June depending on how wet the previous winter was.

Cape Ann features 641 total routes with some routes speckled with touch granite. It is composed of mainly boulders and short cliffs which are great for trad, sport and top rope climbs. One of the most popular crags called Redrock is often times hard to find but definitely a must.

Dogtown Park’s 3600 acres hold an interesting history dating back to the 1600’s. What began as an early settlement was eventually abandoned opening the area to witches and vagabonds. During the Great Depression, founder of Babson College had stonecutters engrave inspirational sayings into the various boulders in the area (pictured below) The park features many glacial erratics good for bouldering and 79 total routes. Spiritual Power is a popular climb in the area. 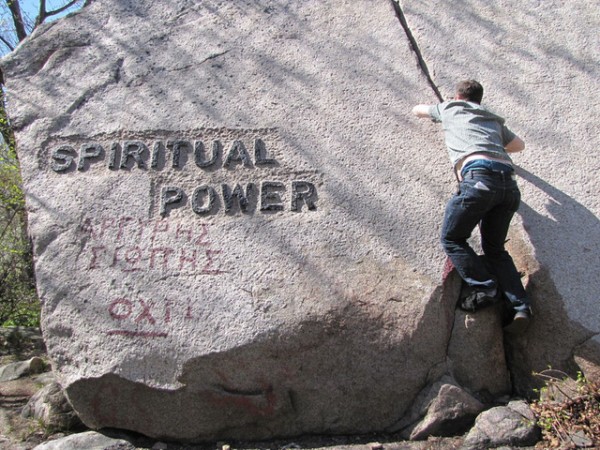 Latest posts by Alan Perlman (see all)
Posted in: Boston