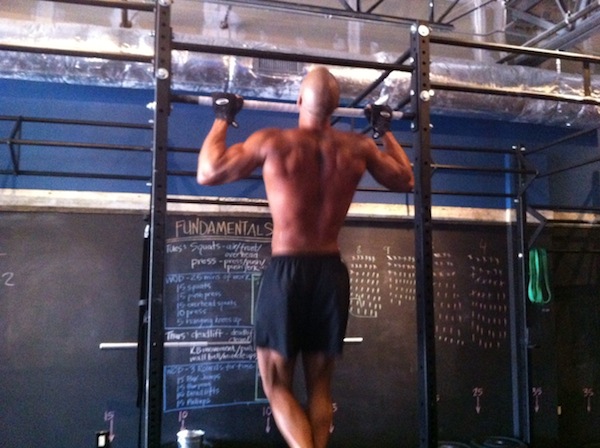 This is a Nerve Rush exclusive article on one of our favorite athletes on the planet, David Goggins.

Update 9/28: A wrist injury prevented David from hitting his goal this time around. Congratulations to him and his girlfriend for raising awareness for the Special Operations Warrior Foundation. You can read more about their joint world record attempt here.

That’s what David Goggins says after September’s very public failure on The Today Show. After going on national television to break the world record of 4,020 pull ups in 24 hours, David had to stop – 2,588 pullups in – due to a partial tear in his forearm.

I would have never gone national television if I didn’t think I could have actually done it.

The culprit, a portable pull up bar that David brought into The Today Show studio. While it was portable, that also meant it wasn’t bolted down – which meant the bar would be physically swinging throughout the attempt. This caused David to have to compensate by using muscles not typically used on his training reps and eventually led to his forearm tear.

That said, he wasn’t satisfied with just trying, he needed to “clean up the mess.”

This is about redemption David Goggins is going to be re-attempting to break the world record in less than a week. While most people are gearing up for turkey and stuffing, David’s got one thing on his mind: breaking the record. Finding redemption.

After finding out about this new attempt via Crossfit Brentwood Hills, we got in touch with David via phone and got to personally interview David – one of our favorite athletes around here.

Right in line with the redemption theme, Goggins’ second attempt will be decidedly more low-key than the first nationally televised one. Hosted by Crossfit Brentwood Hills in Nashville, Tennessee, Goggins will again attempt to break the 4,020 pull up mark in 24 hours. His girlfriend Dawn Griner will be attempting the record for females by attempting to do 2,500+ pull ups in the same time frame.

We’re doing sorta the “low-budget Guinness record.” Goggins said. The cost to have a Guinness certified verification come out in person is close to $7,000, “so we’ll film the whole thing and submit the documentation for it on our own.” Despite failing publicly in front of “millions and millions” of people, David isn’t deterred.

A lot of people will give up after they tried and say ‘oh well, I tried.’ NO. Get back up and keep trying!

Because despite what most people would think, failure doesn’t stop him. Failure drives him

Failure is a powerful thing for your brain. I fail a lot. I’ve never done anything in my life the first time. I’m the king of failure.

He related that the second time he approaches things, he’s better focused, has a plan of attack, is dialed in, and (as he says), “I’m angry.”

“I would have never put myself on national television if I didn’t think I could do it, but I had to go on the next day and humbly say what I said. But I haven’t slept well in 2 months.”

This is more than just a record to David. He needs to see what he is made of. Despite evidence to the contrary, Goggins insists that he is nothing special.

“I am not superhuman. I am not a freak.” He insists that he is just working it out between him and God, so that “when I die, I can know when I’m lying in my casket that I every ounce of will I had, I used.”

While we’d love to still imagine that he is superhuman, David points out his girlfriend Dawn as a prime example of his point.

“I want to talk about my girlfriend Dawn. She is 39 years old. She never did sports. Never did running. Nothing. 6-7 months ago, she could do maybe 7 pull ups. Now she is doing workouts of 700 pull ups in 3 hours…anybody from any side of the street can do it.“

As the interview wound down, I had to ask David one last question.

“I’ll let you answer that question”, he responded.

That’s what we thought.

Best of luck to David & Dawn on their joint attempt this upcoming Sunday in Nashville! Get after it.