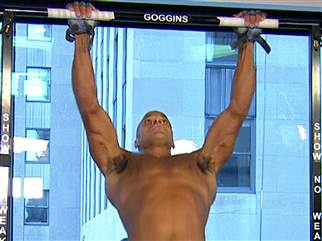 The man is an absolute beast and may not be human (or at least a 2.0 version of most humans). Transforming himself from a 280lb overweight desk jockey to a ripped-to-shreds ultra-marathoner, this man takes athleticism and determination to a whole different level.

We know and love the man for his ridiculous running capabilities, insane mental toughness and feats of endurance. But David is giving us a whole new reason to be in awe of him. He’s working on endurance…with his arms.

Taking a break from running hundreds of miles at a time, David is trying something new: breaking the Guinness World Record for most consecutive pull-ups done within 24 hours. Yup that’s right, he’s going to do some endurance upper body activities from now on.

David Goggins starts World Record try: most pull-ups in 24hrs. Come by Studio 1a and cheer him on & tune in tomorrow to see if he did it!

on the Today Show and he’s aiming to do more than 4,020 consecutive pull-ups. BOOM! That’s a whole lot of pull-ups.

Visit NBCNews.com for breaking news, world news, and news about the economy

Can David Goggins Complete The Most Consecutive Pull-Ups in 24 hours?

He plans on doing 10 pull-ups per minute while on his quest for the world record. That’s 402 total sets and if he keeps up the pace and does them back to back to back, that’s 6.7 hours of consecutive pull-ups (6 hours and 42 minutes)!

Will David Goggins be able to pull off this pull-up challenge? We’ll find out soon!

As of publishing, David passed the halfway mark (2011 consecutive pull-ups) according to the Today Show Twitter account.

It looks like David had to stop before smashing the world record.

David Goggins ends his pull-up record quest after hurt wrist. But all is not lost – thousands raised for http://t.co/ANx5Lmni

Visit NBCNews.com for breaking news, world news, and news about the economy

The culprit: the portable pull-up bar David brought for the challenge was completely different than the one he trained on. It was poorly constructed and had a lot of sway that put an undue amount of stress on David’s body and required much more energy from him. Unfortunately, David didn’t’ realize this until the world record attempt.

When it was all said and done, David Goggins’ world record pull-up attempt by the numbers looked something like this:

He might have fallen short this time, but that won’t stop him. If we know David, he’ll be back to give the consecutive pull-up world record another shot:

“You can fail, as long as you get back up again. I’ve failed plenty of times, but I just keep going. I’m just an ordinary man. I’m David Goggins, a guy who never gives up, who believes that any man or woman can push beyond their own limits with the right combination of will, focus, determination and discipline.” – David Goggins

David Goggins starts World Record try: most pull-ups in 24hrs. Come by Studio 1a and cheer him on & tune in tomorrow to see if he did it!

David Goggins ends his pull-up record quest after hurt wrist. But all is not lost – thousands raised for http://t.co/ANx5Lmni