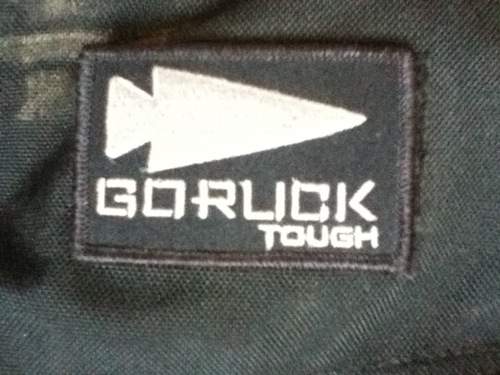 That was the first thing on my mind after this challenge.

I knew it would be “tough.” I didn’t know it would hurt this much.

I learned about the GORUCK Challenge a few months ago after talking with the team at GORUCK and interviewing former specials ops agent Lou (we’re still trying to get him to elaborate on what he used to do).

The interesting thing about the challenge is how little they actually tell you about it. 8-10 hours and ~20 miles is about as descriptive as they get.

They don’t tell you anything about the challenge, you don’t know where the meetup location is until the week prior and, did I mention that you do all of this while wearing a backpack filled with bricks weighing about 50 pounds? (6 bricks if you’re over 150 pounds, 4 bricks if you’re under).

Yea, this sounds nuts, even impossible, but I run obstacles races and write about gut-wrenching adventure – so I figured it was time to put my money where my mouth was and actually do this thing.

Unfortunately, after signing up, I realized the challenge was on the same day as my sister’s wedding – nothing deal breaking – just no time for me to rest beforehand. Oh, well, I figured. I can do without a little rest before the challnege.

After all: how hard can it be?

Those words would come back to bite me.

The day of the challenge, I busted out of the wedding after the reception and went shopping. I grabbed an obscene amount of food and wrapped it all in plastic bags to stay dry (they told us we might get wet). I stopped by Menards to grab six bricks to throw into my ruck. After rushing to stuff it all in my ruck – I showed up at Monument Circle in downtown Indianopolis at 10 o’clock PM on the dot and found a bunch of people who had rucks and seemed to be milling about waiting for orders. I walked up, smiled and said

This seems like a group of people ready for some pain!

A group of them nodded and they circled around me looking expectantly at me. After a few moments, I realized what was going on: they all thought I was the lead cadre!

Unfortunately, I didn’t pick up on this fast enough and they realized pretty soon that I had as little of a clue to what was happening as they did.

We waited a few more minutes and the real cadre, Beaux, finally showed up. He was friendly enough, cracking jokes, downing a beer, and handing us our death waivers to sign (these always make me feel confident that the adventure I’m headed on will be good).

But, once the death warrant was signed – he turned evil. Barking out profanities and orders, he quickly got everyone in the monument area to pay attention to him.

As we scrambled to try and follow orders not only correctly, but in unison, we screwed up over and over and over again as he had us doing pushups, squats and all sorts of movements I’ve never done before.

I felt like I should be in the army and I suddenly remembered the fact that this whole challenge and company is ex-special forces.

What the hell did I get myself into?

I can’t necessarily say what the whole challenge as about – that’s part of the mystique of the challenge — every race is different and you never quite know what to expect. But, I can say we carried a freaking log about 5 miles, crossed a river illegally, carried buckets of water, did overhead press reps to house music while covering enough ground to make you want to get your legs replaced. (We also hunted zombies – seriously). It was awesome.

Just when you think you’re getting the hang of something

– there’s a twist. The challenge is a combination between thinking on your feet and following orders and knowing when the appropriate time for each is (oh, did I mention the whole 8-10 hours and 20 mile thing with bricks thing?)

One of the GORUCK phrases is: Under promise – over deliver.

GORUCK lived up to that promise as well. When the sun started coming up around 5 or 6, I knew we were getting close to the 8 hour mark and started to think we were almost done – but no. We pushed right on past the 8 hour mark and went the full 10 hours (word on the street is some do even more) and finished at 8am at a war monument north of the circle in Indy.

After Beaux yelled at us one final time, shared a personal story and handed us our GORUCK Tough Patch – we walked back to the Indy monument where we started and sat down. For the first time in 10 hours, I dropped my bag off my back and put it at my feet. My shoulders were sorer than they’ve ever been, my feet ached all over and all I wanted to do was sleep, but I got my GORUCK Tough Patch – and it was totally worth it.

So, the final verdict on the GORUCK Challenge: It was hard – really hard and it hurt – a lot, but I’m going ot do it again (I’ve lost my mind and I’m okay with it).

There’s only question left: Are you GORUCK Tough?

If you want to give a GORUCK Challenge a shot, use promo code “NerveRushOct” and get $20 off your registration fee. This is good through October, so be sure to grab your discount before the end of the month!

For a little taste of our adventure Daniel Dumas recorded a short video of the entire experience (I make a cameo around the 3:11 mark).

***
P.C. (Post Challenge). One of the coolest things about the GORUCK Challenge is that if you’re crazy enough to do it – and finish – you find a community of other crazy people who this type of physical torture is fun. Once you finish your challenge, you can join the community and always know that there’s someone willing to do some gut-wrenching adventure – no matter where you are. GOOD LUCK!