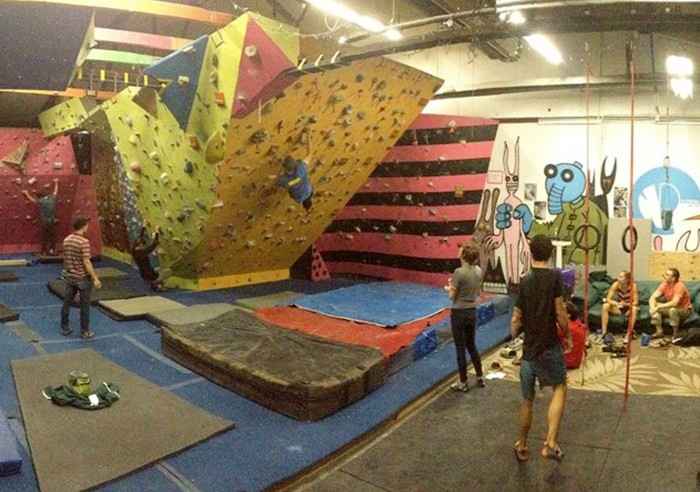 When a fire in the early morning hours of Saturday, February 7 destroyed the building at 91 North Chestnut Street in New Paltz, it took away more than the climbing and training gear inside belonging to the members of the New Paltz Climbing Cooperative, who had made the location their home base since 2011. The good news is that nobody was injured in the fire that also destroyed the STS Tire and Auto Center in the building, but the loss of the community gathering space meant more to the co-op’s members than the dollar amount of the equipment they lost.

The New Paltz Climbing Cooperative was started by a group of friends who shared a passion for rock climbing. “The original idea was to create a space where the climbing community, which is quite large in New Paltz, could come together and climb and train and just have a general place that we could spend time together doing what we love,” says New Paltz High School science teacher Chad Foti. It all began pretty organically, with conversations between Foti and fellow climber Johann Kunz moving from “We should do this” to “I saw a space that might work” to “Hey, this will work.” Other co-founding members got on board — Angela Kunz, Mike and Julie Lillis and Don Spiro — and they secured the location at 91 North Chestnut Street in September of 2011, opening the doors that December. 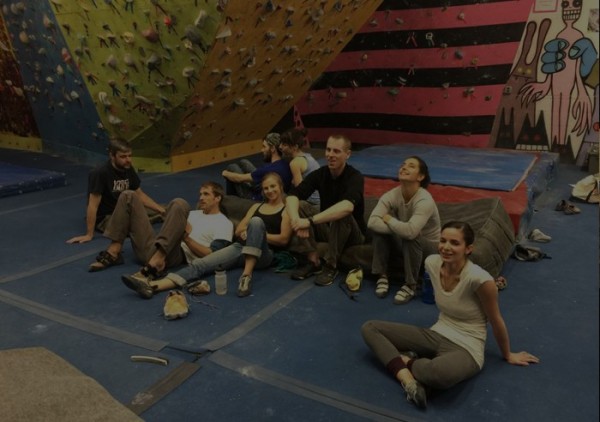 “None of us ever aspired to run a business,” says Foti. “And even now, I don’t think of myself as having run a business. It was very much a community space; the fact that we were able to do it at all is amazing, let alone having had it last as long as it did.”

By the time of the fire, the cooperative had approximately 100 members, who paid $350 a year to join, gaining them 24/7 access to the site. Maintenance and operations were handled in a communal effort; nobody drew a salary. “It was never meant to be something corporate,” Foti says. “All we were ever interested in was covering rent and insurance. The goal was to create a self-sustaining community climbing and training facility, and we ended up creating this micro-community, this mini-reality within New Paltz.”

The space had 15-foot-high ceilings and 2,400 square feet of wall space for climbing and bouldering along with exercise equipment and weights. Painted in bright colors in bold street-art style, the cooperative also had a comfortable area with couches for members to hang out in. All of the tools, materials and sweat equity needed to construct the interior was donated by members, who also pooled their resources in equipment, donating items from their home gyms. Climbing holds — which are more expensive than one might think, says Foti, at $8-$10 each — were also donated by members, who’d acquired them over the years while pursuing their rock climbing passion. “Just to give you a sense of scale, the number of climbing holds you need for a space equivalent to ours in the style of the climbing that we did is about two holds per square foot… so 2,400 square feet of space, you can do the math and we’re talking quite a lot of money just in the holds. Just myself, I had thousands of dollars in holds in there. We were able to source these things through the climbing community, but it took years.” 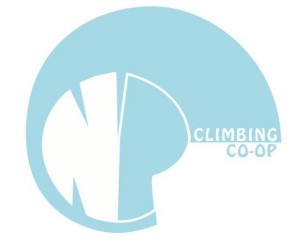 Now the prospect of starting over from scratch is daunting, but not insurmountable, says Foti. “It’s just something that we have to deal with.” At first he considered throwing in the towel, saying that part of him felt like, “We did it well and we went out at a high point,” but then he thought about the value of the community they’d created among local climbers. “Perspective is an important thing,” he says, “and nobody is pretending that this is a world-class tragedy, but it’s a resource that the New Paltz community had that they took advantage of, and is now at the moment, gone. Any personal wealth that was lost by anybody in this pales in comparison to the community lost. That’s really where it’s at and that’s why I’m still here and pushing forward to rebuild.”

It will need a groundswell of community support to do that, Foti says; a true grassroots effort. “We’re fortunate that because of the impact we’ve made, we’ve had a myriad of climbing companies offer us holds at cost, which is absolutely phenomenal. But we still need to raise money to take advantage of that. So we’re looking for a new space and any kind of donations that we can to start accruing the kinds of things we need to start again. And the more that people realize what we’re about and what we’re trying to do, the more people will end up utilizing the space once we get it going again.”

The time frame for rebuilding depends on fundraising and the generosity of the community, he adds, and they hope to stay in New Paltz. “We’re very much open to any possibility, but New Paltz is ideal,” says Foti. “It’s a wonderful place to be a rock climber. We have a unique situation here in that we have excellent, world-class climbing and we’re also really close to other cultural things. Most climbing areas are way out in the middle of nowhere. Yosemite in California is world class, obviously, but the closest true civilization is not close at all. Colorado has some great hamlets where you can kind of live close to the cliffs, but if you live in Denver, or even in Boulder, any of the good stuff is at least 45 minutes to an hour away. In New Paltz, I can literally live, work and play within ten minutes.”

Foti’s passion for rock climbing is what brought him to the area 12 years ago in the first place, he says. “And the Climbing Cooperative made it an even better place. The co-op was this niche that made New Paltz even more viable as a climbing destination. There are not a lot of places like it, that’s for sure. It’s what you’d like to see in any climbing area. It gave everybody the opportunity, no matter who you were, the space to come and climb and make friends.” The best part about the gym, Foti says, was finding out that as much as he thought he knew who the other climbers in the community were, he found out through opening the space that there were actually many more than he’d been aware of. “It was dumbfounding how few people I knew before and how many connections we made through this gym.” 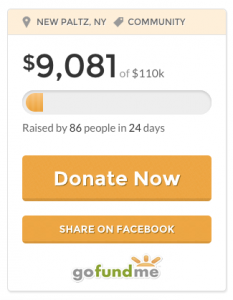 Donations for rebuilding can be made at www.gofundme.com/rebuildnpcc, where two weeks after the fire, more than $7,000 has already been raised toward the $110,000 goal. And unlike some other crowdfunding sites that require an organization to meet its goal or lose all the funds, GoFundMe allows an organization to keep whatever they raise. There are still fees involved, however, so making a donation through the co-op’s website at www.newpaltzclimbingcoop.com is perhaps preferable, with fewer fees involved. “Either place would be great, though,” says Foti. The group has also begun holding fundraising events that will continue in the months to come, with a 5K run possibly in the works. More information can be found on the website or look for New Paltz Climbing Cooperative on Facebook.

Latest posts by Alan Perlman (see all)
Posted in: Climb

← Behind The Scenes: Backcountry Snowboarding With Some Of The Best
Makuakia Rothman: Thoughts From A Champion Surfer →