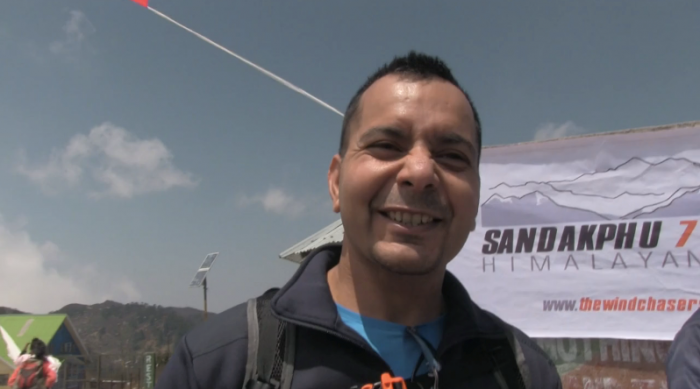 Inside a 70-Mile Himalayan Stage Race

What’s the history behind WindChasers?

The WindChasers started out as a fun run organization with the objective of getting more and more people to run while discovering stunning remote locations in India that would otherwise be very difficult to access. Our quest was to eventually find the perfect running course for marathoners who wanted to progress to running ultras as well as something that would be challenging for elite ultra marathon runners.

During one of our recent runs, Ram Sethu, another Race Director, and me mapped and designed the most stunning yet challenging race course that we had ever seen. The WindChasers became official in the year 2011 and we launched our first event, the Sandakphu 70-Mile Himalayan Stage Race.
I have personally run around 9 Ultras (all in the Himalayas) and several marathons and half marathons.

How many people are involved in putting on a race like this?

Ram Sethu is my partner at The WindChasers and the other Race Director. He has run several marathons and ultras including The Last Desert races in Sahara, Gobi and several others in the Himalayas and elsewhere around the world.

Our Course Director is Pemba Sherpa. He is an experienced climber and has spent most of his life in the mountains. He trained with his late grandfather Ang Tsering Sherpa a.k.a Mountain Man and is a celebrated climber and was on the first ever expedition to summit Mt. Everest with Mallory and Irvine in 1924.

Ram, Pemba and I with our incredible crew of 25 sherpas hold the fort down at The WindChasers race.
Our Official Medic this year is Dr. Anil Menon (MD, MPH) a.k.a ‘Space doctor.’ Dr. Menon is experienced in wilderness medicine, trauma, and is an aerospace medicine fellow from Stanford University. He works at trauma centers in Houston and Los Angeles and at NASA supporting launch and landing of astronauts to the International Space Station.

Dr. Menon is an experienced runner himself and has supported ultra marathons in the Sahara Desert. He has also worked as a medic on Mount Everest expeditions, disaster response Reno Air Races, Indy 500, Earthquake disaster relief and Haiti to name a few.

What’s the course like? What can racers expect this year?

The Sandakphu 70-Mile Himalayan Stage Race is a challenging yet spectacular 70-mile 4 day boutique stage race located at the border of India and Nepal in the Himalayas.

The course starts at 6000ft taking one through a pristine and stunning Himalayan national forest on day one, leading to the most surreal view of Kanchenjunga, the third tallest mountain in the world, on Day 2 at 12,000 feet. Day 3 is the full marathon day at 12,000 feet where runners literally run through clouds while Kanchenjunga, Mt. Everest, Lhotse and Makalu keep runners company! The final day takes runners from 12,000 feet back to 6600 feet as the course cuts through the mountain taking runners through quaint little nepali villages, forests and even waterfalls!

The altitude, unpredictable weather and course which consists mainly of cobble stones and gravel make it rather challenging but it’s probably the beauty of the Himalayas that will take your breath away.

Runners can also expect the most supportive and warm crew that will take care of them like we would our own family.

If I’ve never run an ultramarathon before, is this race for me?

Yes, our race is specifically designed for runners who are looking to run their first ultramarathon.

Do you have any training resources you can share with our community?

Once runners sign up for our race, our team puts together a personalized training program for each runner if requested.

Awesome, thanks Priya for your answers! Folks, if you’re looking for a race to run and an adventure to experience, check out The WindChasers here. Registration opens April 2015!