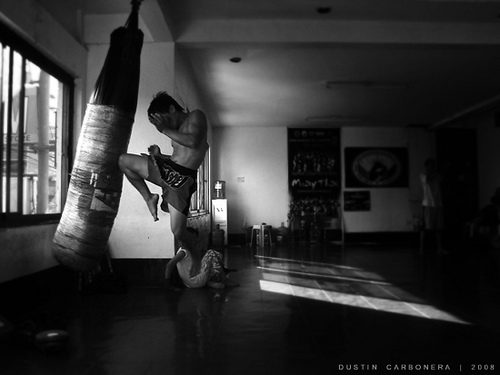 Muay Thai: A Closer Look at the Thai Martial Art

Muay Thai is a centuries-old Thai martial art that in recent decades has become known and respected internationally. Increasingly, foreigners are being attracted to the sport and many relish the prospect of travelling to Thailand to learn the basics from a professional muay Thai instructor.

Apart from the obvious advantages of learning Muay Thai at its source, the chance to visit an exotic country like Thailand plays a part too in attracting aspiring “nak muay” (Thai kick boxers) from far and wide. Whether it’s for beaches, night-life or simply to sample Bangkok’s sumptuous street food, it’s not a bad place to be for anyone looking to learn some of the basics of muay Thai. Flights to Bangkok are numerous from most major cities, and there are often affordable travel deals available.

Muay Thai venues are found in towns and cities throughout Thailand. The most important of these are in Bangkok, especially Ratchadamnoen Stadium and Lumpini Stadium. Both of these venues are easily reached by taxi. Ratchadamnoen Stadium is very close to the famous travelers area of Khaosan Road, while Lumpini Stadium is located near to the well-known Lumpini Park. Ticket prices at these venues are around 2000 baht(£40) but are significantly cheaper elsewhere.

For those interested in a more ‘hands-on’ experience of learning the basics, Muay Thai training gyms are plentiful throughout Bangkok and other Thai cities and towns. However, only those in Bangkok or in Thailand’s second city, Chiang Mai are likely to be staffed by trainers who speak English well enough to explain the techniques of Muay Thai. It should also be kept in mind that there’s a lot more to this martial art than fighting. Elaborate rituals are performed that honor the tradition of the sport. Foreigners need to be mindful of this. Showing any disrespect to such a revered tradition while standing next to a professional Muay Thai boxer wouldn’t be the smartest of moves.

One popular training center for foreigners and locals alike is Petchyindee Gym, which is near Lumpini Stadium. It’s run by Sammuen Porthawee, a highly-experienced instructor and former champion of the sport. Another is Jaroenthong Professional Boxing School in Ramkamhaeng, an outer district of Bangkok. It’s also run by a former world champion, but Ramkamhaeng is quite far from central Bangkok and takes a bit of time and effort to get there. Prices vary by location, but around 200-300 baht (£4-5) per hour is a typical price. For a more remote and rural location, Samkamphaeng’s Santai Gym in Chiang Mai province in north Thailand is quite popular.

Anyone from Britain or any other Western countries can enter Thailand for up to 30 days without a visa, which is ideal for anyone just looking for a few days of casual training. At the other end of the scale, formal training over a long period (up to a year) requires a student visa, obtainable from any Thai Embassy or Thai Consulate.