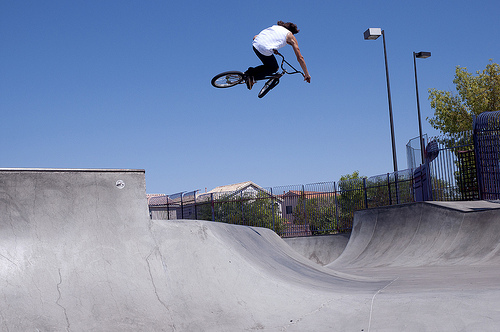 While Las Vegas may be known for its casino gambling, those that live in the city know
that the city has plenty to offer for any interest, including skateboarders. There are eight
skateparks in Las Vegas with varying degrees of difficulty. Below we give you a brief
overview of the various skateparks in Vegas.

Las Vegas has five skateparks that are set up for beginner to intermediate skateboarders.
Many of these parks are simple setups with little to no supervision and many do not even
have phones so parental guidance is suggested.

The largest of the beginner parks is Duck Creek Park located on Pollack Dr. The park is
an impressive 10,000 square foot in size and even has some shaded areas to allow skaters
to cool off some during the Vegas summer. While the park is primary for the beginner to
intermediate skater, there are some advanced aspects to the park.

Winchester Park on South McLeod Drive is a gated skate park that is a bit better
maintained than most of the beginner parks. The park can be used day or night, has water
fountains on site, and has 8,000 in square footage.

There are two parks in Vegas that are exclusively intermediate to advanced level parks.
These are Silverado Ranch Park on Gillespie St and Desert Breeze Park on Spring
Mountain Rd.

Desert Breeze Park is an intermediate to advanced level park that also has 2 hockey
rinks on-site. These are used for Extreme Thing, Fox’s 54321, and the Tony Hawk Tour.
Silverado Ranch Park is not quite as fancy as Desert Breeze Park, but is located in one of
the higher end areas of Vegas.

The only advanced level skatepark in Vegas is Hollywood Skatepark on South
Hollywood. This park has supervision on premises and is only open during supervised
hours. In addition, this park offers Skateboard Clubs, BMX clubs, skateboarding classes,
and open skate.

That’s just some skate parks in Vegas, some other might be underground, or only locals would
know. So yes, there are some fun things to do in Vegas other than
poker – like skate! Who knows what you’ll get yourself into.