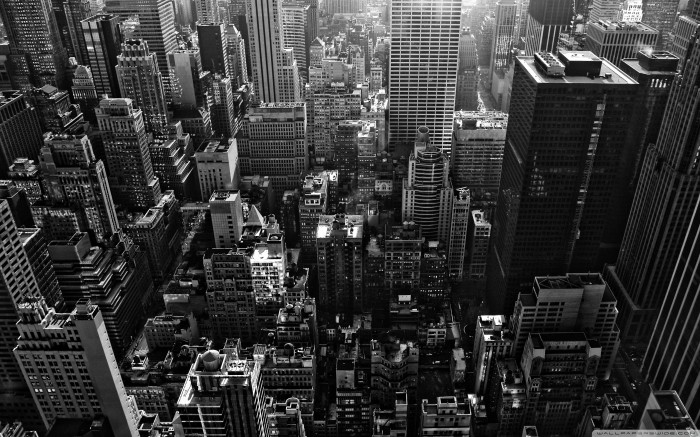 Outdoor adventure and action sports doesn’t have to be reserved for hidden forests and secluded beaches in the middle of nowhere. City dwellers still need to get their adrenaline pumping too! NYC is filled with opportunities for thrill-seekers to get outside and move. Although we likely don’t cover everything the Big Apple has to offer, this list of 10 action sports for NYC residents (or visitors) is a great starting point for anyone looking to break out of the daily grind.

1. Kayaking on the Hudson River

Want to go kayaking but don’t have access to a lake or the ocean? No need because NYC’s non-profit Downtown Boathouse offers free kayaking on the Hudson River. This volunteer organization opens up the river in May to all shapes, sizes and levels  of experience to come out and enjoy a nice day out on the river every weekend until October. Oh, and did we mention that it’s completely FREE!? Check out any or all of their three locations at Pier 40, which is west of Houston Street, Pier 96, which is west of 56th Street and in Riverside Park at 72nd Street. 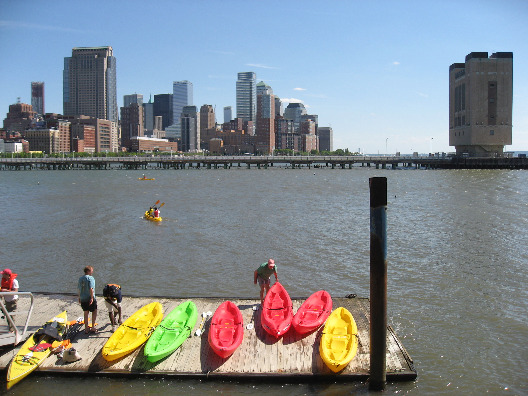 There are over 2,000 bridges in New York City. Although we’re not suggesting you go for a run across every single one of them (some don’t provide pedestrian foot paths), we can suggest a list of the top four bridges to incorporate into your Manhattan morning run.

As the most well-known bridge in the New York City Area, the Brooklyn Bridge definitely tops the list as one of the most trafficked bridges in the city. Despite the fact that you will have to deal with a lot of walkers and bikers, the Brooklyn Bridge provides a beautiful view of the Manhattan skyline to distract you during your run. 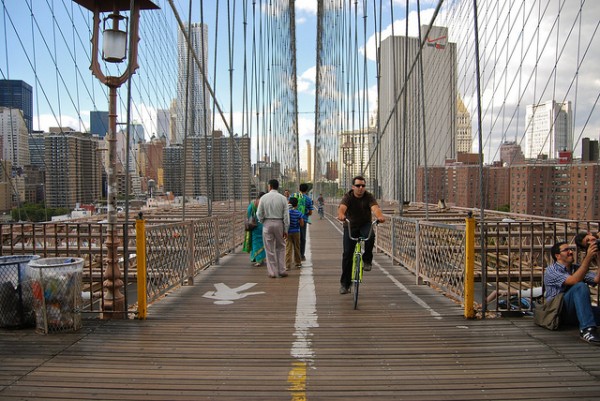 The Manhattan Bridge is less trafficked than the more popular Brooklyn Bridge which means you’ll probably have an easier, less stressful time getting across. This bridge starts higher up than most other bridges in the area therefore providing a more gradual incline. The only downfall is the loud noise of the trains passing by, so just turn up the volume on your iPod and kick it in to the other side. 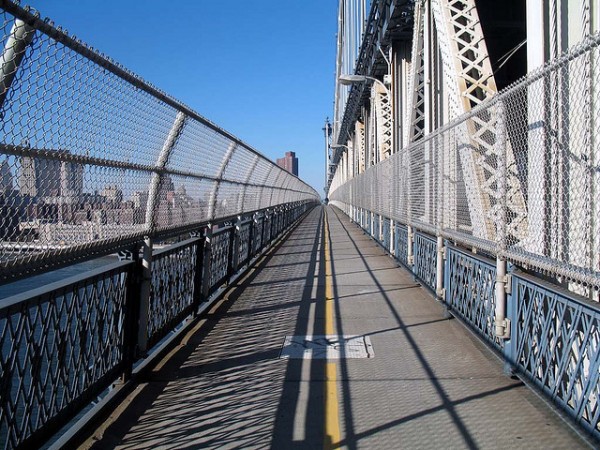 As one of the most difficult bridges to get across, the Williamsburg Bridge stretches from Bedford Ave. to Delancey St. One of the great things about the Williamsburg Bridge is that for the majority of your run you won’t have to share space with bikers. The bridge is rather steep in both directions so it’s a great way to get in some hill workouts! 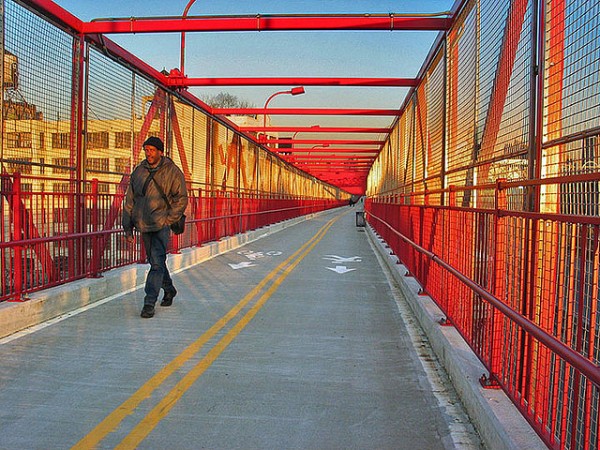 Looking for a long bridge run? Head up to Washington Heights and take the George Washington Bridge over the Hudson River to Jersey! It’ll lead you straight to a park on the other side where you can either hang out and relax or keep running and explore. Either way, although the views from this bridge are not as delightful as the others on the list, you’ll definitely feel satisfied on your way back to the city from this long run. 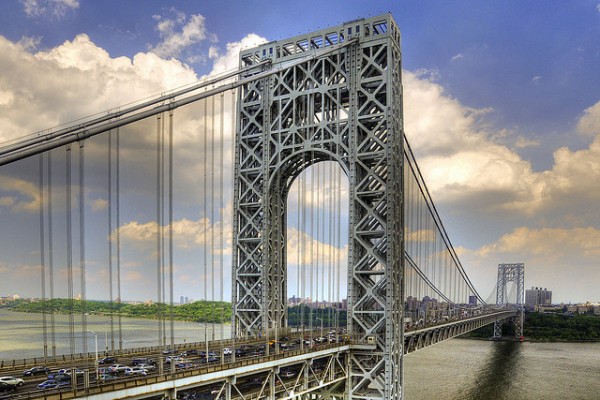 3. Roller Blading the West Side Highway

If you’re new to New York City, you’ll definitely want to check out the West Side Highway Bike Path. While you’re at it, bring your roller blades and soar down the 13-mile path from Battery Park to Fort Tryon Park!

4. Biking in the Palisades

Palisades Park is a 2,500 acre park located in Alpine, NJ just over the George Washington Bridge. This park offers 30 miles of hiking and ski trails, which are also great for biking. Getting here can be a hike in itself as you’ll have to cross over the GW Bridge and then head another 7.5 miles until you turn into the park. Nevertheless, biking through the Palisades Park is a great way to get away from the hustle and bustle of the city. For those who don’t own a bike, check out Metro Bicycles on West 96th St. and Master Bike Shop on West 72nd St. in the Upper West Side. 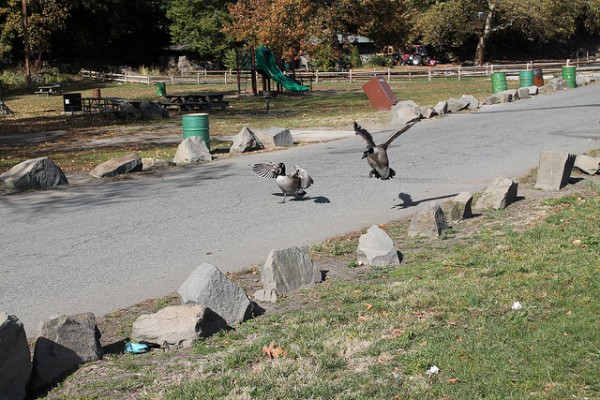 Hopefully you’re familiar with Central Park or you’ve at least heard of this NYC landmark. This is a great spot located right between the Upper East Side and the Upper West Side is a nice little getaway complete with a few miles worth of running and bike trails. The best times to run through here are weekdays from 10am to 3pm and 7pm to 10pm and weekends beginning at 7pm on Fridays. This park has a bunch of different loops of varying length to check out, which you can find on this nifty map of Central Park Trails. The largest loop cover just more than 6 miles. 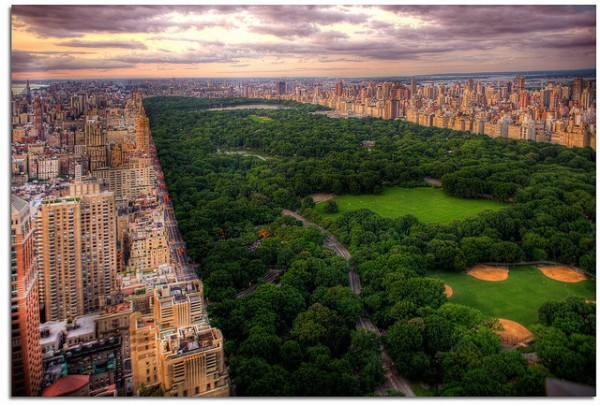 Not really a fan of running? No problem. For rock climbing experts and beginners alike, you can get your fix right in the center of NYC in no place other than Central Park! In fact, well known 13-year old American rock climber Ashima Shiraishi has been known to climb here from time to time. Step foot on child prodigy bouldering soil and get in some awesome climbs right in Central Park. 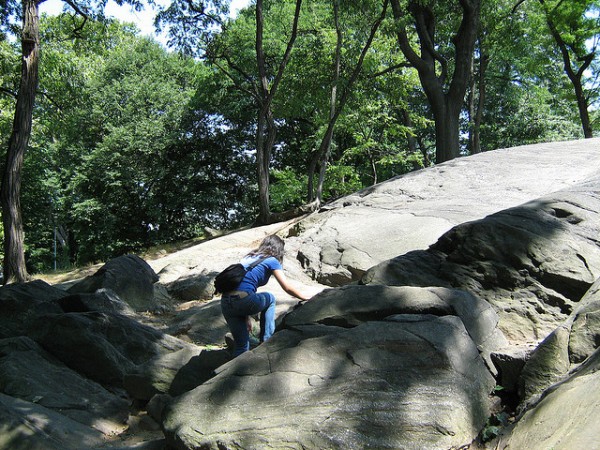 Need to get in some hill training or just want to challenge yourself on a hard run through Washington Heights? Luckily the USATF has provided a nice hilly 2.5 mile run that starts on the corner of Fort Washington Ave and West 181st Street and ends by the Lissemore Music Studio. If you’re up for a good workout this run is a must! But if you want to switch up the route and add in a couple flights of steep steps, see if you can handle the staircase that runs from 187th and Fort Washington Ave to Bennett Ave (pictured below). 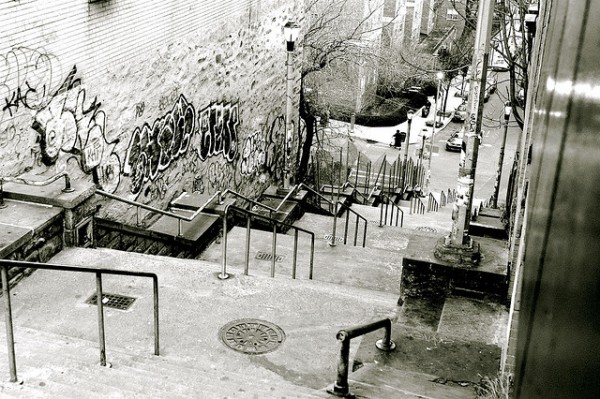 8. Run Up the Empire State Building

Speaking of stair running, the Empire State Building Run-Up is an annual race up 1,576 steps to the top of the Empire State Building. This “vertical marathon” is the ultimate thigh-burner and will undoubtedly leave the winner, or anyone who tries their hand at this feat, feeling pretty good about themselves. The race is a great opportunity to raise money for charity but you have to apply well in advance as race entries are limited! 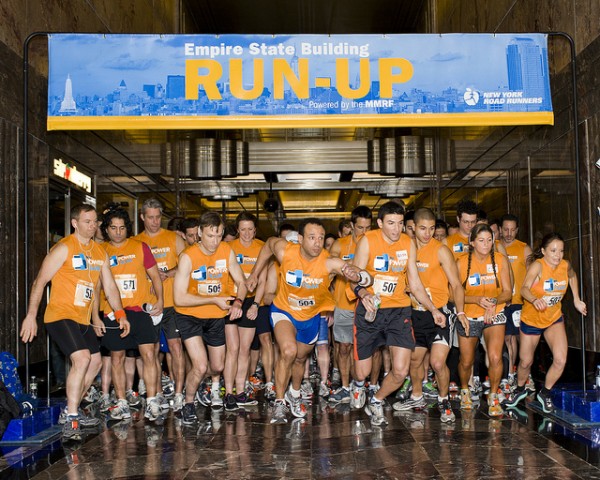 Clearly we saved the best for last, because who wouldn’t want to go trapeze flying in the middle of the city!? The Trapeze School New York has three locations. The outdoor facilities, which are open from May-October, are located in the South Street Seaport at Pier 16 and in Hudson River Park on the top of Pier 40. Their indoor location, which is open October-April, is located in the Circus Warehouse in Long Island City. TSNY offers classes and workshops for beginners and experts alike as well as the option to host parties on site.

← Why: Nikon D4 Release Video by Corey Rich
Attention, a Life in Extremes →