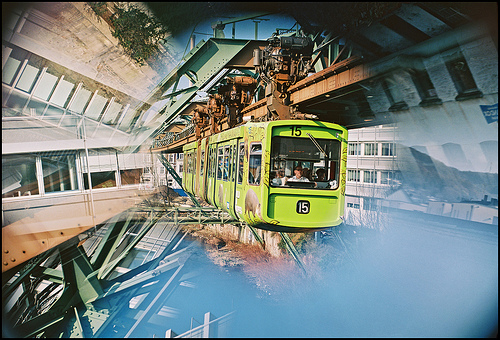 In case you haven’t noticed yet, we’re living in the future. A future of hovercrafts and human-powered helicopters, new cars topping speeds of 250+ mph and, wait for it, water-powered jet-packs.

Getting from point A to point B has never been so fun. Curious what my options are, I poked around the Internet superhighway in search of the world’s wackiest & most gut-wrenching modes of transportation.

Here are 7 options I came up with.

Seen during the closing ceremonies of the Beijing 2008 Olympics, the monowheel is a one-wheeled single-track vehicle, where the rider sits within or next to the wheel.

Funny story — while monowheels are typically used in jest or for recreation today, they were actually considered serious modes of transportation from the 1860s through to the 1930s.

Seems much more fun than a unicycle.

Half-boat, half-truck, this amphibious bus, code-named DUKW, played a crucial role in the allied invasions during World War II. Interestingly enough, more than 40% of all over-beach supplies in Normandy were transported by DUKWs during the first four months.

Today, these duck buses are typically used as tourist attractions in harbor, lake and river cities like Boston and San Francisco. I’ve ridden one before — super fun.

This suspended railway in Wuppertal, Germany ferries upwards of 80,000 people a day. While it looks more like a theme park attraction, it is the oldest electric elevated train in the world.

Yes, a water-powered jet pack. The JetLeve is $100,000 and, for the gamers out there, akin to something Mario wears in Super Mario Sunshine.

The pack is tethered to the water via a hose and has a maximum altitude of 27 feet but can run at a healthy 35 mph for up to two hours. Imagine a lake, 10 of these JetLevs, a ball and a couple of goals.

Ah, the classic tuktuk. These motorized three-wheelers  originated in Bangkok, Thailand and then spread to Laos, Cambodia, Pakistan, India and Bangladesh — if you’ve traveled to Asia or certain parts of Africa, you’ve likely encountered the tuktuk in all of its chaotic glory.

The tuktuk thrives in high-speed, traffic-congested environments and is sure to provide its rider with the trip of a lifetime.

The powerbocker actually works. Attach these power springs to your feet, and you can jump as high as 7 feet and run up to speeds of 20 mph. That’s as fast as an Olympic sprinter. I’d love to see Usain Bolt rock a pair of powerbockers.

Coming in at under $200, they’re quite affordable and seem like a fun way to explore urban terrain.

I can see it now — powerbocking parkour! You heard it here first, folks.