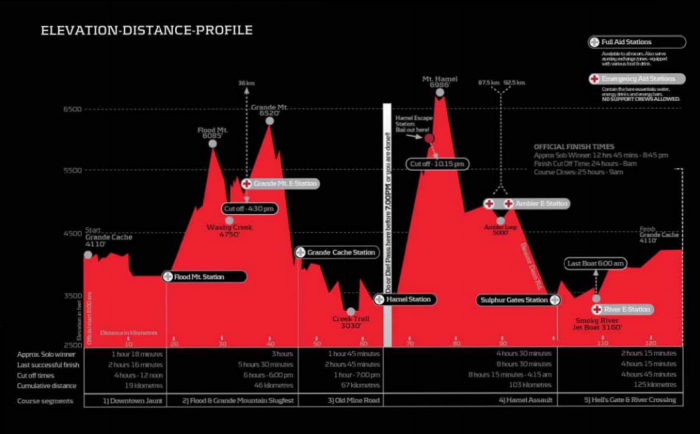 O Canada!
Our home and native land!
True patriot love in all thy sons command.
With glowing hearts we see thee rise,
The True North strong and free!

An annual course held in and around Grande Cache, Alberta in August, the Canadian Death Race, which was first started in 2000, boasts 125 km of hiking and running within a 24-hour time period. As a racer, you’ll cross a major river and wind through the Canadian Rocky Mountains, covering over 17,000 feet of elevation change.

The Canadian Death Race is influenced by Greek Mythology, specifically the myth of Charon, the ferryman of the dead. Each racing team–you can race individually or in a team of up to five people–is given a coin which must pass from person to person and summit to summit. Only when the coin is presented to the ferryman at the end of the course is the race completed.

Longer obstacle races and adventure races typically have cut off times, specific times of day that you have to have completed a portion of the race by. This is to ensure the health and safety of racers and event coordinators. At the Canadian Death Race, the segments and times are:

First leg, 19 km: The Downtown Jaunt [CUT OFF 12PM]
-this is the shortest leg of the course
-features several creek crossings and one significant downhill

Fifth and final leg, 24km, The River Crossing [CUT OFF 9AM]
-for most runners, this leg will be completed in the dark, with much of the trail under a heavy canopy of trees, so eye protection is required

As you can see, the Canadian Death Race is pretty brutal. Kudos to anyone out there who has completed it.