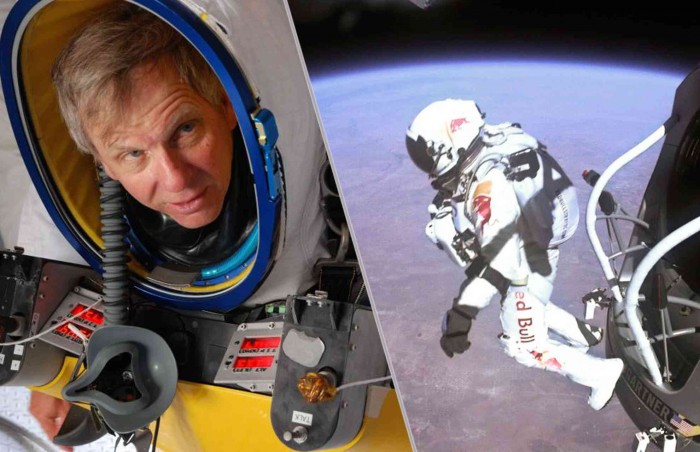 On October 14th, 2012, after 7 years of planning and a 2 1/2 hour ascent, Felix Baumgartner jumped from 128,100 feet above Earth’s surface, breaking 3 world skydiving records in just over a 10 minute period with the Red Bull Stratos project.

Tethered to a helium balloon that sped upwards of 1,600 feet per minute, Eustace smoothly rose from an abandoned Roswell, New Mexico runway, soaring to an altitude of 135,890 feet, over 25 miles above Earth’s surface.

Then, after just over two hours, Eustace ignited a small explosive device that severed himself from the balloon. For a full 15 minutes, he reverse-rocketed back down to Earth, at one point, triggering a sonic boom as he hit a top speed of 822 miles per hour.

“It was a wild, wild, ride,” Eustace explained to the Times.

Eustace decided to pursue the project back in 2011, connecting with Taber MacCallum. McCallum is one of the founding members of the Biosphere 2 project, an artificial ecosystem built to explore concepts like the possibility of space colonization.

Eustace thought he could develop a simpler system that what Baumgartner used, working with MacCallum’s company, Paragon Space Development Corporation, to develop a life-support system that would allow him to breathe pure oxygen in a pressurized suit, during both his ascent and fall.

While Eustace’s company, Google, offered to help with the project, he declined support, worried that his jump would become a marketing event. Instead, Eustace recruited a small team of engineers to help him actualize the project.

Kudos to Eustace and his team for pulling this off so successfully. Here’s looking at you, Baumgartner, to take it to the next level 🙂

Latest posts by Alan Perlman (see all)
Posted in: Sky