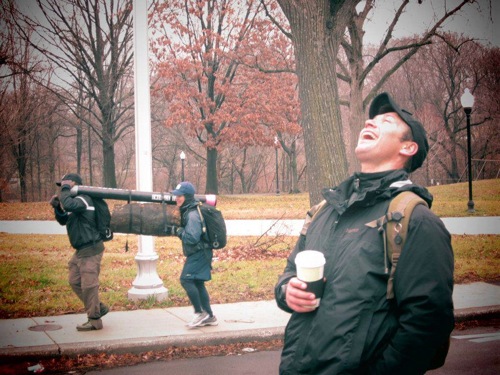 Inside the GORUCK Challenge with Lead Cadre Lou Lepsch

We always say the favorite part of running an adventure site is the people we get to talk to. Today is no different. As soon as we found out about the GORUCK Challenge, we tracked down the people in charge of this massive gut-check adventure and told them we needed to talk. We got in touch in with Lead Cadre, Lou Lepsch – the ex-special ops agent in charge of this ridiculously awesome event, and in true Nerve Rush fashion, we bombarded him with questions.

Also, as a bonus, at the end – we’ve got something awesome to give away, so you’ll want to check that out. But before we get to that, here’s a little bit more about the GORUCK Challenge from Lou himself.

Thanks for talking with us Lou! Can you tell us a little bit about the GORUCK Challenge? How did you get involved?

I got involved after a night of pool water with Jason when he visited me at Fort Bragg. He briefed me on the CONOP (Concept of Operations), and I thought it was awesome. We sat around drinking pool water while Java (GORUCK dog) tore up cases of Bud Heavy, and I was hooked.  Jason and I worked together in the Special Forces Q-Course, and the opportunity to work with him again was a no brainer.

How does being a Cadre fit into the race logistics? You lead classes?

First thing the Cadre does is a boots on the ground reconnaissance of the ground and some target analysis – working out potential missions for the participants. We get a route from HQ a few days before, but the Cadre needs to spend a good four hours minimum – sometimes longer – to work out how that route will play out in real life.

During the challenge, the Cadre poses scenarios to the team, events to test not only the individual but the team. The Cadre’s main job is to bring those individuals together as a team and form friendships for life. They just experienced something life changing and definitely not a 5K, and the bonds last a lifetime.

And you have a background in Special Ops? Whoa. Could you, ahem, elaborate?

What separates the GORUCK Challenge from the many other adventure, obstacle and endurance races out there?

The team, the city, and the Cadre. Much like Special Operations training that the Cadre all went through, you never know what to expect. You’ve got to focus on the task at hand – while also focusing on the bigger picture. The bigger picture is the team. Our events are in cities, and the route is designed to be a guided tour – a shopping tour with many coupons along the way.

The city provides those real life problems for the team to solve. It’s not as if we are renting out a ski resort and putting logs there for people to carry from this cone to that cone. The Cadre separate us – you’ve got that legitimacy, but it also makes it a more personal event. It’s one Cadre with thirty people, and you really get to know each other. They always hate the Cadre at first, but by the end they love us. In the end, we want every single person to walk away knowing they accomplished something.

What training regimen would you recommend for a GORUCK participant expect?

It doesn’t matter, because you’re still going to be sore. But I would recommend a CrossFit regimen with some minor distance running for cardio.  But in the end, it’s 90% mental. Don’t take it so seriously. Partake in some ACRT (Advanced Cellular Repair Technology, aka beer) like we all do.

Where can we learn more about the GORUCK Challenge?

Visit GORUCKChallenge.com and also check out @GORUCKChallenge on Twitter. The Cadre all tweet during the event, and we get a lot of suggestions from people following the challenge at home. It’s like watching GORUCK TV in real time!

Huge thanks to Lou and the GORUCK Challenge team for taking the time to speak with us. After this interview, I was so excited about GoRuck, I just had to do it. So I’m signed up for the first GoRuck Challenge as soon as I get back to the states.

Stay adventurous out there!