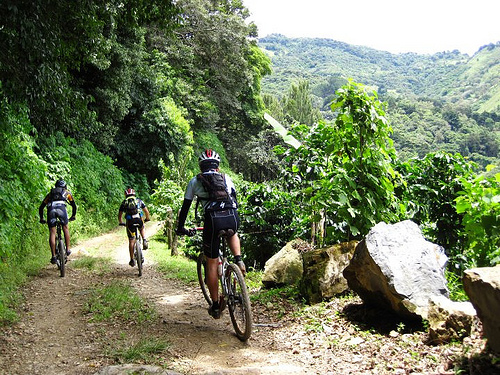 Held annually in mid-November and starting in the small Pacific Coast beach town of Jacó, Costa Rica, La Ruta de los Conquistadores is a coast-to-coast mountain biking race that follows the route taken by the Spanish Conquistadors led by Juan De Cavallón in the sixteenth century.

Undoubtedly one of the most difficult athletic events on the planet, La Ruta attracts hundreds of the very best mountain bikers and endurance racers from around the world each year. The unique and daunting Costa Rican territory is so harsh that, back in 1540, it took the Conquistadors 20 years to cross it—today, modern-day racers do it in 4 days.

The course covers 240 miles and, between its sea-level start and finish, crosses 5 mountain ranges with a cumulative climb of 39,000 feet. You read that right. 39,000 feet.

Racers ride through jungle, over active volcanoes, through farms, coffee fields, forests and small villages. They experience Costa Rica’s hot tropical climate as well as its cold-high mountain temperatures. The highest point in this grueling odyssey is the Irazú Volcano, which towers over San José at an altitude of 11,259 feet.

Costa Rica is one of the most biodiverse places on the planet, packing a full 5% of the Earth’s species of birds, plants and animals onto just 0.01% of the planet’s land mass. La Ruta’s course takes racers through nine of the country’s twelve different microclimates, soaking them, freezing them, sweltering them—it’s a hell of a course.

Román Urbina, a native Costa Rican, started the event in 1992. Urbina, an elite athlete known for staging challenges to publicize Costa Rica’s endangered wildlife, decided to retrace the Conquistadores’ steps on his mountain bike with 34 fellow adventurers. They battled coastal heat, climbed up active volcanoes, forded rushing rivers by shouldering their bikes and skidded through mud—one of the original racers offered up $50 to whomever managed to finish first.

For the next twelve years, only local Costa Ricans competed. In November 2005, Swiss racer Thomas Frischknecht won the race and a year later, Colombian Leonardo Páez took the crown. Costa Rica’s Federico Ramírez is the course’s legend, having won La Ruta five separate times. These days, at least a couple hundred riders attempt the annual course, the majority of them international. It’s been estimated that roughly 10% of the riders are women.

La Ruta de los Conquistadores is a personal growth experience. While a few race La Ruta, most are just happy to finish the course. The race is about appreciating Costa Rica’s unique and natural beauty, about challenging yourself to survive arduous adversities.