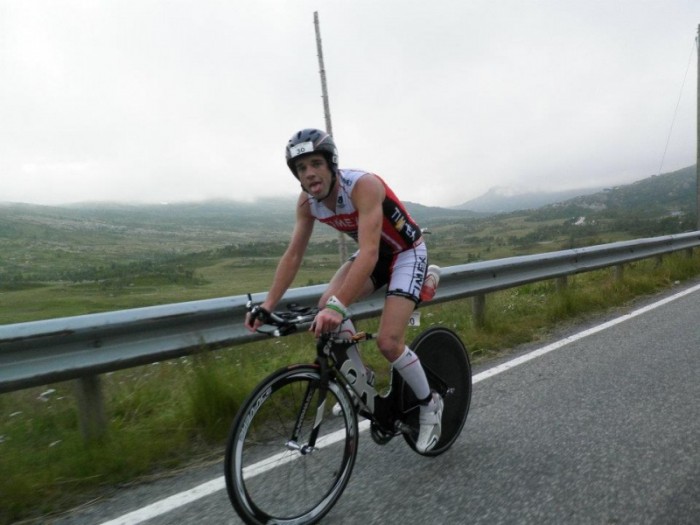 This race profile comes from Mark Vermeersch, a triathlete for Team Timex and independent consultant who traveled to Norway to race the Norseman Xtreme Triathlon, deemed the hardest Ironman-distance triathlon in the world.

In the fall of 2011, I watched the Norseman video for the second time, having heard about the race through the triathlon grapevine. The Norseman video drove me to sign up for the Norseman Triathlon in 2012, which also happened to be the race’s 10th anniversary. For those unfamiliar, Norseman is billed as the world’s hardest Ironman-distance triathlon, containing thousands of feet of vertical climb, not to mention the jump off the ferry into freezing water (at race start) and weather conditions that change quickly (and are often quite cold).

Though this sounds miserable at first glance, the scenery is beyond gorgeous. The Norwegian people are extremely supportive and the enthusiasm of the race organizers and participants is contagious.

It is a unique race experience, but not for the faint of heart. Going into the race, my training had been sporadic, which, in retrospect, was suboptimal (to say the least!) given the challenge presented by Norseman.

On race morning, I rolled out of bed at 1:15am for the 3:00am check-in. Per usual, I was quickly awake, myself, and for once, nervous for the race. Once 3:45 rolled around, it was time to hop on the ferry.

For a point of reference, I’m the bald guy who looks like he wants to cry at 0:59! Though I was quite nervous on the ferry, once I plummeted into the cold waters 2.4 miles from Eidfjord, I realized it was just another race (a statement I made to my brother Matt in the first transition) and that I should focus on enjoying it (especially given that my training had been sub-par; my goal was just to get a black t-shirt, awarded to the top 160 finishers at the summit of Gaustatoppen mountain). Swimming went off without a hitch, as I put minimal effort in to conserve as much energy as possible for the bike and run portions. With a time in the high-58s, I was one of the first competitors to hit shore.

Exiting T1, the (roughly) 4,000 foot climb was quite enjoyable, as I passed about the same number of people who had passed me, again, focusing on conserving energy. The scenery was ridiculous, as we basically traveled along a river that had carved out a beautiful valley. Near the top of the climb, my support crew caught me for the first time.

Shortly thereafter, I threw on a coat, as the temperature had dropped from about 60 in Eidfjord to about 45. Let me tell you, descending a couple thousand feet in 45-degree weather is less-than-stellar. It was on the descent that the wheels fell off (figuratively). Looking at my watch, I was “only” 3:45 into racing with a 12-hour “ish” expected finishing time. It was after a 10-minute stop with my support crew on the road where I decided to mail it in; I didn’t have 8 more hours of racing left in the tank. Ultimately, a huge disappointment, especially given the time I had put into training and the trip.

Watching the Norseman video again today left me close to tears, as I want to finish Norseman SO BADLY. One thing is for sure, I WILL return in pursuit of the elusive black t-shirt.

Target date: 2014. Keep your eyes peeled for an update—and a picture of me in a black t-shirt.