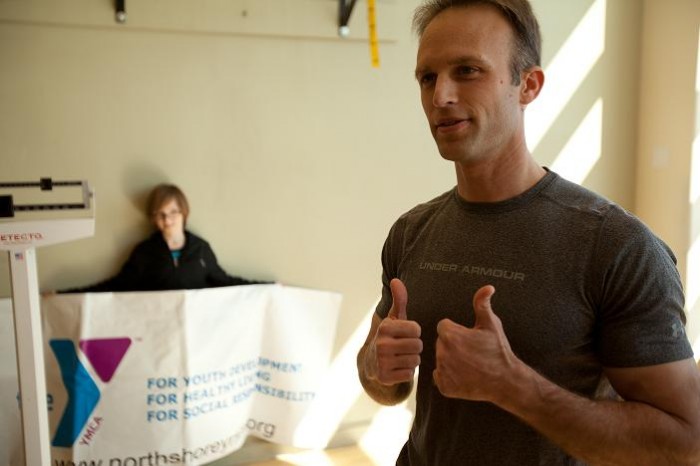 Meet Ron Cooper, world record holder for the most number of pull-ups in 60 seconds.

Ron competed in Ninja Warrior last year, won a Warrior Dash and has top finishes in many local New England races. He often competes with his wife, Katie, a former All American 5K runner.

I asked Ron to tell us a bit about his training schedule, the Guinness World Record process and his future plans.

Ron, thanks for joining us!

36 pull-ups in 60 seconds. Congratulations! How did you train for that?

Thanks! I’ve been doing pull ups twice a week since high school, and usually my pull up sessions are fairly intense. Apparently the compounding effect of doing so many pull ups over such a long time was enough to sneak my name into the Guinness World Records.

In terms of training for the record, I stuck to twice a week pull up sessions, each of which lasted about a half hour. I did and still do five to seven sets of various types of pull ups and chin ups twice a week.

Can you walk through the Guinness World Record process start to finish?

The process is actually a little cumbersome, which is probably why not many people make attempts. First I had to contact Guinness to let them know I was going to have a record attempt. Upon their green light that I could make the attempt, I then had to follow their lengthy instructions to insure the integrity of the attempt. First I had to coordinate a bunch of disinterested parties to help make the attempt official. I had to have two video cameras filming me from two different angles, the front and the side, to make sure my form was proper (no kipping, full arm extension on descent, chin above bar on ascent). I also needed a photographer, a timer, a police officer, a personal trainer as a judge, and some type of media coverage. Then I had to mail all my “proof” footage and signed documents into Guinness, and wait a few months for their response. Getting the certificate and the letter that I set the record in the mail was absolutely awesome. I’m just an every day guy, so to have a Guinness World Record is a lifetime achievement that I’m very proud of.

You’re going to be on Ninja Warrior? How did that happen?!

I still have to get on the show for this year! The audition process is going on now, and I should likely know if I’m on or not in the next few weeks. I got on last year, and got royally humbled on the first obstacle. The competition is very real, and the obstacles are insanely difficult. I’d love to get back on the course and have some redemption.

I first saw American Ninja Warrior when I was flipping through channels one night a couple of years ago and was immediately entranced. Once I discovered that there was going to be open casting for the following season, I went into high training mode. I eventually sent in an audition video, and managed to get the invite. My wife, Katie, even got invited down to compete, so we made a family affair of it. We brought our kids down to Miami, where the filming was for our region, and had a blast. We met some great people, and competed alongside some of the best athletes in the country for obstacle racing.

In your opinion, what are 3 things people can do to improve their fitness?

Here are three rules I live by that if others live by they will have maximum success in fitness. Rule number one is consistency. Every morning at 5:30 AM when I hit the gym or the roads for a run I always know that 95% of the battle is just getting out the door. Once I’m in motion I know I’ll give a good effort, I always do. Consistency led me to a Guinness World Record, but most importantly it has led me to a healthy lifestyle.

Rule number two for me is to stay within myself. It’s good to use the bar someone else has set as motivation, but at the end of the day we are all unique and have our own strengths and weaknesses, and someone will always be better. As long as I do the best I can and give it my all each and every day, I can’t be mad.

Rule number three is to always be a student. I’m always looking for ways to improve, and never think I know everything. Learning new training keeps it fun and interesting, and leads to better gains. This is especially true with obstacle racing. Since these races really only have become mainstream since 2010, we’re all learning. There are no rule books.

What’s on the horizon? Any races or events this summer?

I’m signed up for several obstacle course races this summer. I love them. They are so much fun. I’m currently signed up for Warrior Dash, Superhero Scramble and Spartan Race. I’m sure I’ll do some local road races too. Nothing to get the pulse going like a race.

I might even attempt to beat my own Guinness World Record for pull ups. I unofficially did 39 pull ups in a minute recently, 3 better than my previous record. I’d like to have my best effort be the one I put forward.

But in the meantime, I’ll keep my fingers crossed that I can get back on American Ninja Warrior, and if so, I’ll do my best to get some revenge on the course for last year.