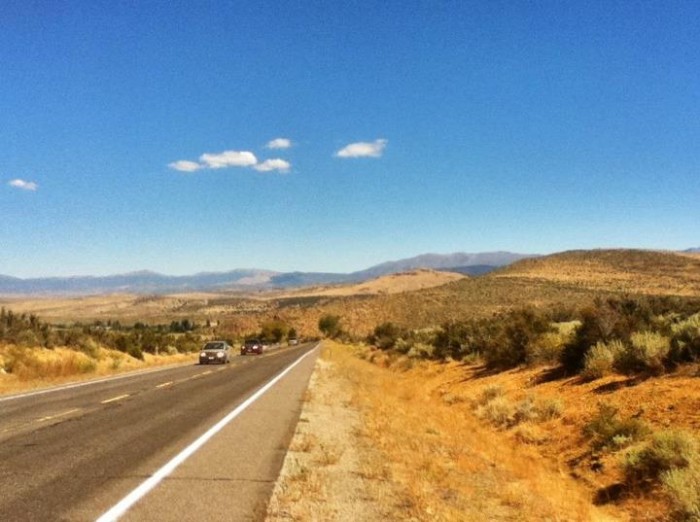 How I Walked Across America

This is a guest post from Nate Damm who not only is a fantastic writer but, last year, spent 7.5 months walking across America. Yes, WALKING ACROSS AMERICA. I asked Nate to share some of his thoughts and images from the trip. You can reach him at Nate Damm or message him on Twitter.

I’m Nate Damm, and from February 26 to October 15 of 2011, I walked across the United States. My route took me from from Lewes, Delaware to San Francisco, California. I walked across/in Delaware, Maryland, West Virginia, Ohio, Kentucky, Indiana, Illinois, Missouri, Kansas, Colorado, Utah, Nevada and California. I still haven’t calculated exactly how many miles I walked, but my best guess would be around 3,200.

My training strategy was a bit lazy, as I was living in Maine prior to the walk beginning and the winter temperatures kept me indoors. The plan was to get in shape as I went and take it slow at first. This turned out to be a good strategy, actually, and within a few weeks things were going pretty smoothly.

Logistically, walking across a continent can get pretty tricky. Water and food sources are constantly on the mind of a walker. And on top of that, you have to find a place to sleep each night. I was on a very tight budget, so usually this meant finding a hidden place off the side of the road where I could set up my tent (hopefully) undetected.

The Typical Day Of A Cross Country Walker

A typical day for me would start at around 7 AM, sometimes earlier, sometimes later. A lot of when I woke up in the morning depended on how secure of a sleeping spot I had. If it was a heavily wooded area where I knew nobody would see me, I’d often sleep in. On nights when I was hiding in a shed or in a small patch of trees in a residential area, it would be much earlier so I could get up and out before the sun came up.

After waking up I would first take my tent down and pack everything up, then enjoy a relaxing breakfast. Usually this was something small that required no preparation, such as Pop Tarts and an energy drink of some kind (unhealthy, I know).

I’d shoot for at least 6-8 miles straight first thing in the morning to get a good chunk of my daily mileage out of the way, then slow down from there. Afternoons were usually filled with many breaks and taking time to chat with anyone who was interested.

My favorite time to walk was in the evening around dusk, so I would spend that time watching the sun set and finding a place to sleep. Once I did, I’d set up my tent and usually just sit outside and read or catch up on phone calls. Dinner was usually some sort of canned pasta, eaten cold out of the can. Cooking was just not something I wanted to take the time or energy for.

The typical day was often not overly exciting, but that’s the way I liked it. The pace of an on-foot lifestyle is extremely slow, which definitely can take some getting used to. I grew to love it quickly.

Without a doubt, the best part of the walk was the random acts of kindness that I experienced. Almost daily, and sometimes multiple times each day, complete strangers would stop and help me out in whatever way they could.

Sometimes this was a simple conversation, others it was the gift of a cold drink or sandwich. Many times I would meet someone as I was walking down the road and begin talking to them, and an hour later I would be freshly showered and eating dinner with an entire family, then spending the night in their guest room.

One of my favorite memories of kindness from the walk was from a day in West Virginia. It was around 30 degrees out, and snow was forecasted for the quickly approaching night with temperatures dipping down to 15 degrees. After a 20+ mile day I was cold, exhausted and nervous about camping in such cold weather, as my gear was not meant for temperatures that low. As I was heading out of town to find a place to camp in the woods, I heard a shout from the house to my left. A raspy voice yelled out, “Hey! Ya want some cookies?!” I could not see the person who was shouting to me, but yelled back, “Hell yes I want some cookies!” A man stepped out into his driveway and invited me in, then after talking for a while said I could sleep in his guest room for the night. He took me on a driving tour of the area, including a visit to the farm he grew up on, which was nestled deep in the West Virginia hills on a long dirt road. It was an amazing place that still had water gravity fed into the house from a spring in the hills. He then cooked me one of the most massive meals I’d ever eaten in my life. I woke up the next morning to fresh snow on the ground, feeling quite glad that I hadn’t woken up in it and had made a great new friend in the process.

In Nevada, I randomly met a guy named Rick, and we started talking about life on the road. Earlier in his life he had spent 9 years living in his truck, traveling all over the U.S. and Canada. He put 600,000 miles on his Ford F150 during that time and went wherever he wanted. It was a nice conversation, but eventually we parted ways as I had to continue West.

The next day a truck rumbled up next to me, and it was Rick. He was ready to help me out with car support and camp with me for a few days. Over the following few days Rick traveled with me, would give me water and food every 5 miles or so and then camp with me at night. I learned that he had been a POW in Vietnam, where he was also wounded. He escaped from the POW camp to safety, which was a story that was intense beyond anything I’d ever heard. Around our nightly campfires he shared stories from combat that blew my mind and brought tears to my eyes on several occasions.

He was a cancer survivor, and had also been in a coma for 2 ½ months after suffering a stroke. He had once been given 6 months to live because of a brain tumor, but opted for a very risky surgery which ended up working. Rick was the toughest and most interesting person I’d ever met. One night he told me, “I’m losing my vision, so every night I sit out and watch the sunset. I could lose my vision anytime. I’ve soaked up everything I can, my whole life’s been that way.” Eventually Rick needed to head home, and I needed to prepare myself for my final state border crossing into California.

As he hopped in his truck, Rick looked at me and said something I’ll never forget, “Remember, there’s no end to the adventures unless you put an end to them yourself, you control everything, keep going.”

The hospitality I experienced and stories I heard throughout the walk far exceeded any expectations I had prior to hitting the road.

The last section of the walk was bittersweet. I was excited to see friends and family after a long 7 ½ months on the road, but nervous about what would come next. Walking was the only thing I’d really enjoyed doing in my life up to that point, so I knew it would be a tough adjustment when the time came to settle back into a somewhat normal lifestyle. I did my best to enjoy every moment as much as possible as I wound my way out of the Sierras, through Napa Valley and toward San Francisco.

The final day was a whirlwind and went by quickly. Joined by a fantastic group of friends and family, I made my way over the Golden Gate Bridge and along the rocky coast on a beautiful hiking trail. Before I knew it I was walking through one final neighborhood, down one last hill and then found myself standing in sand. I approached the ocean in front of me slowly and rather calmly, but once my feet hit the water I was struck by the magnitude of what I’d just done. I was a bit more emotional than I’d care to admit, but it was a wonderful moment.

I’m currently living in the great state of Maine. I spend most of my time these days walking (of course), spending time with friends and working on projects like Gadlr and other geeky Internet stuff. Most of this upcoming summer will be spent living in my Subaru and exploring new places, while also visiting many of the people who helped me last year on the walk, which should be a blast.