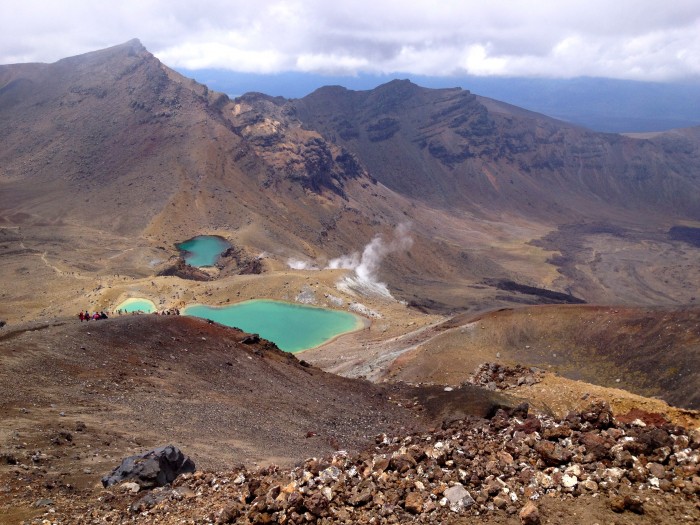 Adventurers travel to New Zealand in search of the perfect hikes, occasionally dominating all nine Great Walks in one visit. The problem with the Great Walks, at least during the summer holiday season of December and January, is that everyone wants to do them. That makes for overbooked huts and campsites. But visitors can experience the extremities that New Zealand has to offer by visiting geothermal hikes on the North Island.

The Tongariro Alpine Crossing is ranked again and again as the best day hike in New Zealand. A mini version of the three-day Northern Circuit trek, the Tongariro Alpine Crossing takes hikers past three volcanoes, volcanic craters and stunning, glowing blue lakes. Covering nearly 20 km, the track takes anywhere from six to 10 hours to complete, depending on if walkers choose to summit Mt. Tongariro.

It begins on mostly flat land, zigzagging over volcanic rock and a small river. The trail is well marked and, unfortunately, rather crowded. About three km into the hike, a small trail leads off to a trickling waterfall. As it continues, the track carries up to Mt. Tongariro, the mountain that inspired Mt. Doom in Lord of the Rings. This is where the going gets quite a bit rougher. A steep hike up stairs and sharp inclines brings trekkers to the base of Mt. Tongariro, an active volcano that last erupted in August, 2012. Here, hikers can choose to scramble to the summit, a rocky climb, with virtually no path, or carry on toward the crater summit instead.

The crater summit looks down into reddish, purple rocks with steam rising from within. Not much further, sit three lakes that shine blue-green behind the stinky, sulfur steam that clouds around them. The hike ends by descending in dozens of zigzags, back and forth. Finally, the last couple kilometers lead into the woods and over a rushing river. There’s no bridge so walkers must prepare to hop across on rocks.

Waiotapu’s tagline is “a geothermal wonderland,” and that it is. The hike through the park is much less extreme than the Tongariro Alpine Crossing and only takes most visitors an hour or two to complete. But the sites make up for what the hike lacks in extremity.

The walk passes through several colorful lakes, ranging from lime green to aqua. The lakes all sit at well over 100 degrees C and stink strongly of steamy sulfur. Many fizz as Co2 bubbles to the surface. The trek also passes by bubbling, acidic mud swamps, gurgling as their air pockets surface, along with several purple and lime green craters and caves, formed by acidic steam and mingling minerals.

Just outside of Waiotapu, hikers who’ve often stopped by on their way back from one of New Zealand’s Great Walks, can soothe aching legs in the natural hot springs. Just a few minutes from Waiotapu’s visitor center, travelers park their cars and dive in, but a sign nearby warns swimmers to keep their heads above water at all times to avoid the risk of contracting malaria.

About 40 miles South, outside of Lake Taupo, is another hot springs more popular with locals. Hot water rushes down a small waterfall at Thermal Park, were it meets cooler water and creates a warm swimming spot. The pool on top of the waterfall is hotter than the average hot tub and an excellent place to revive sore, hiking muscles.