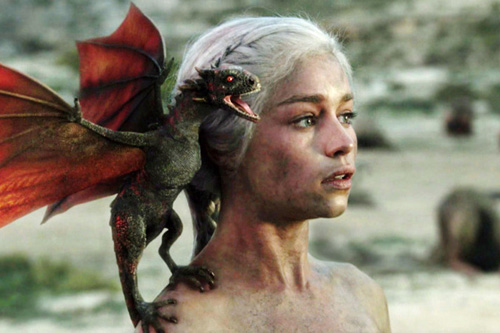 This is a guest post by Yael Levy of dreamBIGLY.

Dragon-taming! Jousting! Walking through fire! The characters in the fantasy hit TV show Game Of Thrones (based on George R.R. Martin’s series of books, A Song Of Ice And Fire) get up to all kinds of dangerous activities in the land of Westeros.

These heroes and villains can barely leave their castles without mortal peril befalling them! (How’s that for adventure?). Embody the Game of Thrones spirit by mastering one of their extreme skills that allow them to fight another day. Their gut-wrenching challenges make perfect additions to any adrenaline junkie’s life list – here are some of our favourites:

ARYA: Learn how to sword-fight

Arya may be the smallest character, but she is a total badass and is drawn to sword-fighting like a moth to a flame. Luckily for modern-day knights-in-training, the art of sword-fighting has not completely been lost. There are schools and courses that offer sword-fighting lessons for those of us that want to learn how to do a bit more than just ‘stick ’em with the pointy end!’

Academie Duello, the self-described ‘centre for swordplay’, offers Weapon Mastery, Warrior Fitness, and even Mounted Combat training! For more specialised weaponry skills, take a look at the Association for Renaissance Martial Arts, who offer training for the longsword, sword and dagger, rapier, cut & thrust progression, and the awesome-sounding ‘renaissance grappling’. Your new life as a Ser begins here!

JON SNOW: Fend for yourself in the wild.

Jon Snow and the rangers of the Night’s Watch are the ultimate protectors of the realm, and as rugged as they come. Leaving everything they know behind them, they risk their lives crossing the Wall to the vast unknown, where wildlings, giants, wild animals and the Others await them.

So, embrace your inner ranger and venture in the wild! Take a leaf from Bear Grylls’ book, who, by the way, would absolutely dominate the Nights Watch, and go native. There are some incredibly remote places on Earth where it really is every man for himself, where you can test your mettle by living off the land, surviving the elements, animals and poisonous mushrooms.

Our top candidate for your adventure? Tristan de Cunha, an archipelago of small islands in the middle of the Atlantic Ocean, and the most remote inhabited place on Earth. It is only accessible by boat, and there isn’t a regular service. Eek.

Brandon Stark is a prolific climber who likes to scale anything and everything. If he was a real boy, he’d probably have already made epic YouTube videos of him ascending ridiculously high peaks without safety ropes whilst drinking a Red Bull.

So, chances are Bran would love to climb Spider Rock, Arizona – an 800-foot sandstone monolith spire that rises out of the ground like some otherworldly structure. It wouldn’t look out of place in Westeros, so get your gear, friends, and head on down to conquer it like a Stark!

Tyrion is the black sheep of the Lannister clan, and, after being thrown in jail for an alleged crime, Tyrion demands a trial by combat!

One of my favourite stories is that of the 60-year-old British man who, in 2002, tried to invoke the ancient practice of trial by combat rather than pay a £25 motoring fine. Fortunately (or unfortunately?), the UK courts rejected his offer of a fight to the death with the Driver & Vehicle Licensing Agency, but the question remains – how badass would it be to settle a disagreement with a good old fashioned bout of fisticuffs? If it’s good enough for Tyrion Lannister, surely it’s good enough for us?

A great modern-day equivalent to a duel is a character-building endurance test. There are a plethora of events specially designed to break you into little pieces and make you squirm.

A firm favourite is the Tough Mudder – Enroll yourself and your enemy, and you’ll face a 10-12 mile obstacle course, replete with 12-foot walls and underground mud tunnels, testing your strength, stamina and grit. The first person to the finish line gets ultimate bragging rights until the end of time. Sorted.

So Daenerys’ family are really into dragons, which apparently means that she’s impervious to fire! Handy!

Become an honorary Targaryen by learning how to fire-walk. Yes, there are professional fire-walking companies that can teach you how to walk over hot coals without feeling a thing (allegedly). You could go one step further and join a circus skills workshop, where you could learn how to partake in a spot of fire-eating, fire-breathing, or fire-juggling! Burn baby burn! (Dragons are optional!)

Game Of Thrones is full of activities that’ll get your adrenaline pumping. Level up your life by adding your ideas to your life list today. But be quick – Winter is coming…

Yael Levey is the co-founder of dreamBIGLY – a website that’s all about getting you to live your dreams through the power of the life list! Yael lives in London, UK, and is passionate about helping people live the life they want. Follow her on Twitter.