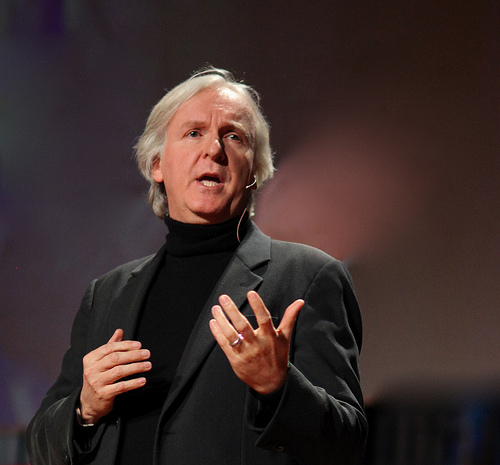 How James Cameron Voyaged 6.83 Miles to the Ocean Floor

It was very lunar. a very desolate place, very isolated. My feeling was one of complete isolation, from all of humanity.

James Cameron, we salute you.

On March 26th, 2012, Cameron completed what is now the deepest solo-man dive in world history. 6.83 miles to the bottom of the ocean. With 30+ deep-sea dives to the Titanic and 7 years of preparation for this particular voyage, Cameron was no stranger to the open ocean — check out this clip to hear him wax philosophical on his experience.

The Challenger Deep, 6.83 Miles Down

The Challenger Deep is a small, slot-shaped depression of the Mariana Trench, the world’s deepest canyon, situated about 200 miles southwest of Guam in the Pacific Ocean. The descent in Cameron’s proprietary bullet-shaped submarine took 2 hours and 36 minutes, and while the vessel was designed for a 6-hour trip, the mission was cut short a couple of hours in when a hydraulic fluid lead obscured Cameron’s view. It only took 70 minutes to ascend.

Cameron spent more than 3 hours drifting along the Challenger Deep, an alien-esque, desolate landscape more than 50 times grander than the Grand Canyon.

When Cameron surfaced, he was unable to fully extend his arms and legs for hours.

A half-hour special, James Cameron: Voyage to the Bottom of the Earth, is running on National Geographic and showcases Cameron’s expedition.