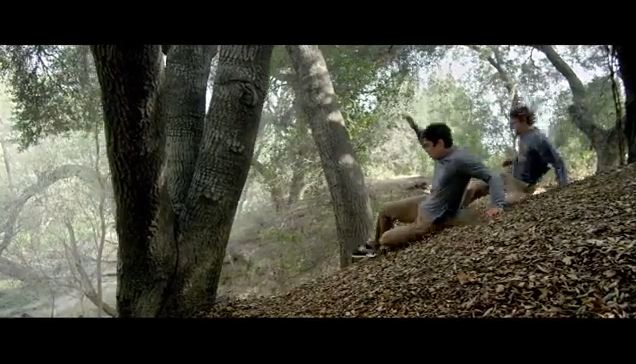 Parkour can’t be that hard, right? This clip makes it look easy. And fun!

In a new advertisement that brings Land Rover mind share to a more extreme buyer persona, four parkour traceurs romp around the woods, flipping and twisting and tumbling in slow motion. The film is beautifully shot. The light is right. The clips maintain a sense of fluidity, not unlike the very philosophy of parkour itself. Getting from point A to point B in as fluid and efficient of a motion as possible.

While this notion of efficient movement through an environment has been around for centuries–think how we evolved as a human species–modern parkour materialized as an organized practice during World War I and II as part of French military training. Since then, it’s grown in popularity and has been featured in movies like Casino Royale and all over the Internet superhighway.

Parkour is a philosophy, a low-impact and efficient approach to movement, and in the broader sense, to living. In that sense, one can practice parkour anywhere, though most often it’s performed in an urban environment. The Tempest Freerunning Academy in Los Angeles, similar to an indoor rock climbing gym, is one example of a location dedicated specifically to practicing parkour. Many of parkour’s top athletes come from France and Eastern Europe.

How Much Does Parkour Cost?

Unlike other extreme sports, parkour is more of a philosophy than anything else. Because of this, all you need are some sturdy sneakers, comfortable clothing and the right landscape. You should probably work on your upper body and core strength, so that might cost you a gym membership. It’s an approachable sport that’s easy to get into but incredibly difficult to master.