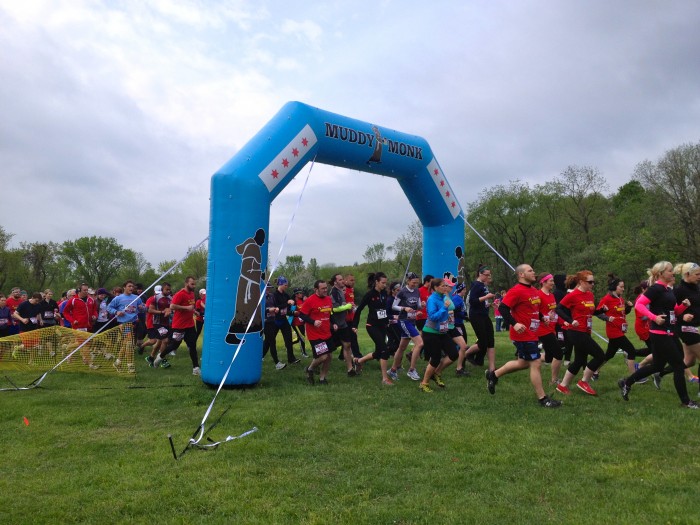 Fidgeting racers wearing red T-shirts huddled behind the Muddy Monk race line. Serious runners, dressed in under armor, running bands and a watch to clock their times moved to the front. A herd of runners pushing strollers or running with dogs made up the middle of the crowd. In the back were the walkers, some even wearing blue jeans instead of running pants. The red shirts read “I heart Momma” on the front and the backs of some read, “I love my momma” while others proclaimed “I am loved.” It was the first annual Muddy Monk Mother’s Day 5K, one of 10 races this season.

Trail runners are scarce in Chicago compared to either coast. Running enthusiasts often flock to Northern California, site of the Dipsea race, one of the oldest foot races in the U.S. Here, they can drive west to sprint along rough trails on shore of the Pacific Coast or head east to jog by the waterfalls and cliffs of Yosemite National Park. Others set out for New Hampshire, where they can weave through the White Mountains or compete in the Loon Mountain Race, one of the country’s most competitive trail running circuits. Instead of running through natural trails, most athletes in Chicago sprint along the smoothly paved Lake Shore Trail or weave through the loop and heavily congested Grant Park.

For some runners, Muddy Monk events are their first real taste of trail running. Ryan Saurer, a tall man with a stocky build, first ran a Muddy Monk 10K in mid-April. Used to running on even terrain in Chicago, where he lives, the puddles and trees were new obstacles for him. “This was a whole new challenge cuz your ankles are rolling left and right in the mud,” said Saurer after the race, his shoes and calves caked heavily in mud.

Because of the shortage of trail running opportunities in Chicago, Muddy Monk strives to build the trail community by hosting several trail races per year, each complete with a lively after party. Art Boulet, the founder of Muddy Monk trail races, runs a company that’s open to competitive racers who are focused on shortening their time, but those who are more interested in jogging through the course and grabbing a hotdog afterward are also welcome. Some of the less competitive runners would cross the finish line on May 11 nearly 50 minutes after the air horn sounded, averaging 16-minute miles, the pace of a quick-paced walk. That’s why Boulet works hard to organize snacks, drinks and prizes. He wants other urbanites to embrace the trail running community and enjoy the outdoors outside of the city. “I live in Wrigleyville so everything’s right there,” said Boulet. “All the great bars are there, but this gets me out of my neighborhood comfort zone and into the woods.”

Excited chatter and children’s squeals rose from the crowd of runners waiting to start the Mother’s Day race. Dark clouds covered the sky. The chilly May morning air felt thick with rain and smelled of freshly cut grass. Eye of the Tiger pumped beats through speakers, the bass vibrating the soft ground nearby.

The music went quiet as Boulet, stepped up to the mic. He wore a blue jeans speckled with mud stains and a blue and white baseball hat. His grey sweatshirt displayed four red stars framed by two blue, horizontal stripes, the Chicago flag. The name Muddy Monk is a nod to Boulet’s time at Princeton Theological Seminary and the dirty nature of trail running.

“Thanks for coming out today,” said Boulet. He rolled up his sweatshirt, a tattoo of the Muddy Monk logo poking out from under his left sleeve. “Just a note about the trail: There are some muddy sections. Don’t be afraid to dive right through them or go around them. This is America. You have a choice.” Cheers rang from the crowd. Dogs barked. Children clapped. The air horn sounded and the racers were off.

The runners pounded along the ground, soft after a night of rain. As they sprinted across the recently cut field, clumps of wet grass clung to their shoes and ankles. Majority of the more serious runners moved without a word, plugged into their headphones. Those in the back of the pack, trotted along, laughing and chatting about the brunch plans after the Muddy Monk as they headed toward the tree line.

The races have come a long way from the first Halloween-themed one on October 28, 2012. Muddy Monk’s premiere event had three pieces of rebar on either side of the starting line with a fall-themed runner from Michael’s. At the October race, Boulet stood on a chair and said, “Ready, set go.” There were only two porta pottys for attendees, a large mistake he realized when he saw the mile-long line stretching from each. Just half a year later, the Mother’s Day race used bright yellow fencing and an inflatable start and finish line with the Muddy Monk logo printed on a light blue. Now, Boulet had a complete speaker system, music mixes and an air horn to get the racers going. This time, he knew to rent a whole line of porta pottys to scatter around the outskirts of the race area. In addition to learning from trial and error, the racers themselves also make helpful suggestions like the one to switch from the original plastic cups to paper ones so that they’re biodegradable if they blow away.

Boutlet works with the trail coordinator from the Forest Reserve to obtain permission to use the land. Then, being a trail and ultra marathon runner himself, he tests out each trail before choosing it for a Muddy Monk event. He doesn’t measure for distance, he just runs through the grass, trees and mud. Then he returns home and maps it out on GPS to determine if it would be best suited for a 5K, 10K or half marathon.

Nineteen minutes and 55 seconds after the racers disappeared into the trees, Anthony Katz crossed the Muddy Monk blow-up finish line breathing evenly. Mud splattered his bare calves, but his white T-shirt was dry. He’d barely broken a sweat. Members of the Boulet family cheered, handing him a medal and a finisher’s glass. He smiled and walked over to the finisher’s tent where music, bananas and Chicago Finch’s Beer Co. brews awaited him. Fellow runners chatting, munching on hotdogs and laughing between sips of cold beer would soon join him.

On the course, one of the last waves of runners broke through the thick trees. They ran, their muddy shoes pounding the grass, mouths open, panting, gasping for air. A mother and son, with matching red hair jogged slowly, their hands clasped tightly together. They ran with the final blob of identical red race shirts that read, “I heart my momma” on the front. A sweat-drenched “I love my momma” was printed across the back of his shirt. His mother’s said, “I am loved.” Hand-in-hand, they crossed the finish line.