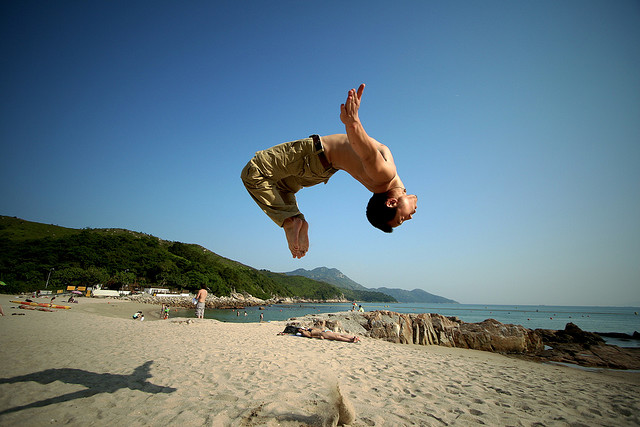 Anthony Mychal exists at the crossroad between fitness and athleticism. As a professional, he’s a writer appearing on the likes of T-Nation, LIVESTRONG.com, STACK, and Greatist. As a dude, he’s a self-proclaimed performance goonie that practices martial arts tricking. He splatters his ideas about building a body that matters on a weekly basis on his blog.

Martial arts tricking is an aesthetic blend of flips, kicks, and twists. Not to be confused with parkour or freerunning, martial arts tricking (“tricking” for short) is another underground sport that’s rapidly gaining fans and participants across the world. The recently held World Tricking Championship—an event sponsored by the likes of RedBull, Undefeated, and Beats by Dr. Dre—showcased the grace and athletic talent tricksters bring to their sport.

The vast majority of tricksters have no formal martial arts or gymnastics training. Instead, they are driven by a passion for doing the seemingly impossible—this is one of the true beauties of tricking. But the best thing about tricking? Anyone can start at anytime.

Pleasing the minimalist inside us all, tricking is defined by the equipment not needed. Most people begin tricking with only two things: bare feet and a bed of grass. The last time I checked, the cost of these items was reasonable. So much for the bad economy.

Going barefoot is more necessity than cosmetic. There’s something stimulating about having a strong sensory connection with the ground. Shoes not only slip, but also add unnecessary bulk. Most tricks benefit from less weight carried on the extremities.

The only piece of equipment to consider is a video camera. Tricking is a “feel” based sport. Getting a sense of body position in space is tough work at first. Having a second look helps dissect technique for future training sessions. Nothing beats slow motion video on the computer. Since tricking is sister to gymnastics and brother to martial arts, it borrows a lot of skills from both of these disciplines.

Flexibility plays a huge role in tricks. Not just from an ease of performance standpoint, but also from a cosmetic standpoint. Although tricking holds philosophical meaning to some, the sport is still rooted in creating visually stunning movement. The crisper, flashier, and aesthetically pleasing trickster will always be better than someone of equal (or greater) talent that has sloppy technique. In the tricking world, the former person would be referenced as having “clean” tricks.

I should note, however, that technique is also largely individual. Unlike gymnastics and other formal sports, tricking thrives on the incorporation of personal style and flare. Points aren’t deducted for doing things differently, and in some instances, it’s encouraged. This makes tricking a breath of fresh air as it allows for true self expression.

The type of flexibility needed for tricking is called dynamic flexibility. Dynamic flexibility is the ability to actively move a muscle about its joint, which is different than the standard sit-and-reach-esque stretching you’re likely familiar with.

Basic kicking ability is important. The martial arts roots are what separate tricking from most other forms of freestyle acrobatics. Keep in mind, however, you don’t have to be a martial artist to trick. Most tricksters teach themselves the basic martial arts kicks, such as front kicks, side kick, hook kicks, and crescent-style kicks.

Reactive ability, although not necessary from the start, is a key component of tricking. Being explosive and quick on your feet defines a good trickster. Unlike most other characteristics, however, this usually develops naturally over time by virtue of the progressive nature of the sport. Training for it separately can overtax the body and put your priorities in the wrong place.

Mental strength is the unsung hero among the clam and clatter. Although tricking is hugely physical, the high flying moves are only made possible if fear can be tamed. The first hurdle is usually the backflip, although moves become ever more complex over time. The mental battle never really ends.

Although the logistics aren’t written in stone, there are a few basic categories that each trick falls into. Each category has “basic” tricks that serve as the starting point and gateway for more advanced tricks.

Kicking-based tricks separate tricking from the rest of extreme underground sports. This category starts with the tornado kick and 360 crescent kick. With the addition of twists and subtleties, these moves turn into the 540 and the 540 hook/crescent (sometimes called a cheat 720 kick).

Flipping-based tricks start with the backflip and frontflip, although the backflip is much more important. Of all categories, flips are the most mentally taxing. Like twisting, however, flipping tricks make their way into a lot of more advanced moves. It’s important to conquer fear of flipping early to ensure smooth progress.

Other tricks that don’t necessarily fit into the above categories also make their way into the sport. Some from other forms of martial arts, others from different forms of acrobatics. For instance, one of the basic tricks, the doubleleg, has roots in capoeira.

How to Start Tricking

Advanced tricking techniques appear daunting, but the beauty of tricking is its progressive nature. By starting at the bottom, you rarely extend beyond your comfort zone. Don’t forget: all it takes is one sunny day to get going. Here are some suggestions for starting.

First, simply stretch outside on a warm day. Remove your shoes and feel the grass in between your toes. Start off with some dynamic stretching: front leg lifts, back leg lifts, side leg lifts, trunk rotations, and arm swings. This will warm-up the hips enough to start practicing basic martial arts kicks like the hook kick, inside crescent kick, and outside crescent kicks.

Second, dive into your acrobatic side and throw some cartwheels, tornado kicks, and 360 crescents. These moves are foundational, and fear shouldn’t be much of an issue. Don’t dismiss their importance. For some, solid work on these entry level skills proves possibility in further advancement.

Third, study videos online to fully understand form. There are great resources out there. Tricks Tutorials has been a mainstay of great information and walkthroughs. Trick Training is another up and coming website that might be worth taking a look at too.

Despite the absolute madness that can be witnessed in some YouTube videos, everyone starts out at the same step. Everyone stretches. Everyone practices the basics. Everyone has a little fear. But after some practice sessions and confidence building, you will be chucking advanced tricks without care and having a lot of fun in the process. So get out there. Get tricky. Outside of your perception of possibility, what do you have to lose?