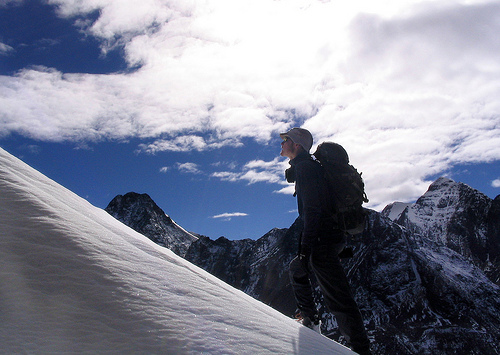 Ladies and gentlemen, Tim Moss is a beast.

The Nerve Rush team has spent hundreds of hours culling together extreme videos, amazing athletes and adventurers, so when we came across Tim and started poking around his site, we took a deep breath and asked, WHY HAVE WE NOT TALKED TO THIS GUY BEFORE?

I’ll let Tim tell you more about himself, but the short story is that he runs an online portal called The Next Challenge, where he encourages people to step outside their comfort zone and to dive into adventure travel. His site is chock full of articles, helpful resources and stories

Tim is the epitome of the Nerve Rush community, and we were thrilled to connect with him.

Take it away, sir.

Who is Tim Moss, and what does he do?

I am a person who enjoys physical challenges and trying new things. This has led me to climb new mountains, run long distances, travel around the world and so forth.

More importantly, it put me in a position where others would approach me for help with their own plans: How do I start fundraising? What training do I need to do? How do you write a press release? I built on this and started a website – The Next Challenge – to write about my experiences, provide resources and offer support and encourage to other people.

You broke a Guinness World Record in a rickshaw? Could you elaborate?

In 2005, I was on an around-the-world challenge using as many different transport methods as possible. Before the trip was up, I was already brainstorming new ideas from a carriage on the Trans-Siberian Railway. A few weeks earlier I’d hitched a lift in a rickshaw in Berlin and came up with a plan to travel around the UK on one of them.

It was 5 years before it came to fruition but, after doing some research on forums about the possibility of riding a rickshaw long distance, and signing up as a rider with a London-based rickshaw-taxi company (Bug Bugs – who later gave me the rickshaw I would use), I set off from Scotland to make my way back home.

During planning I discovered that a couple had only recently set a world record for the longest distance cycled in a rickshaw. I realised it wouldn’t take much effort to go further and, although initially sceptical, a survey on my website indicated a strong preference for me to attempt it. As they say, the rest is history!

Care to share one hilarious (and one terrifying) story from your challenges?

I spent about 6 months in Oman last year with my wife where we undertook all sorts of fantastic adventures. They often seemed to go comically wrong though. Our first venture into the desert almost ended prematurely when we got our car stuck in sand before we’d even managed to park and start walking. We spent about an hour digging it out with some Tupperware and the lid of our cool box.

On a subsequent trip we cycled 90-miles around a desert island on Christmas Day, nearly dying of dehydration by the end. We drove off to celebrate afterwards but when we tried to return to our campsite in the dark, we realised we had no idea where it was and spent several hours driving the circumference of this island, parking every few hundred yards to run onto the beach with a torch.

My scariest moments come from my earliest expedition which was a mountaineering trip in Kyrgyzstan. On one memorable occasion we found ourselves descending what felt like a vertical ice wall. Struggling to cling to the ice with our axes and the front points of our crampons, my teammate below, Thom, shouted “I don’t think I can hold on any longer” and slipped. He was, of course, tied to me and the added weight pulled me off the ice too. Ben, tied above us on the top of the rope, looked down to see where the added drag had come from and was met with the spectacle of the two of us dangling from the rope that was tied to his harness. Not a good moment.

Tell us about your first book! How’d that go?

I recently had the marvellous pleasure of seeing something that I’d written printed and displayed in bookshops. The book is called ‘How to Get to the North Pole: and Other Iconic Adventures‘. It’s a balance of armchair explorer and practical guide to classic challenges like cycling around the world or crossing a desert.

I wrote a couple of short articles on similar topics for my website like ‘How to Climb an Unclimbed Mountain‘. They were enjoyable to write and seemed to be useful and popular. So I decided to expand them into full blown chapters to combine into a book.

It was a very painful process to write at times. Unlike telling your own story, with a practical guide book like this, I couldn’t just rely on knowledge that was in my head. Every single sentence had to be checked and cross-referenced for fear of making a casual mistake or incorrect assumption. It was quite tough going towards the end but very satisfying. Researching it also meant getting emails in my inbox from legends like Sir Chris Bonnington, Borge Ousland and Ran Fiennes which was cool.

Given your site title, I must ask, What’s the next challenge?

The current challenge has been to swim the length of the River Thames. My wife and I started last year and aimed to carry on this summer. Unfortunately, I had an operation on my shoulder which has stopped me from even the gentlest of breast strokes. That, combined with some health issues over the last few months have sadly meant challenges have rather been on hold.

Hopefully we’ll be back in action soon.

You can read more about Tim on his website, The Next Challenge.