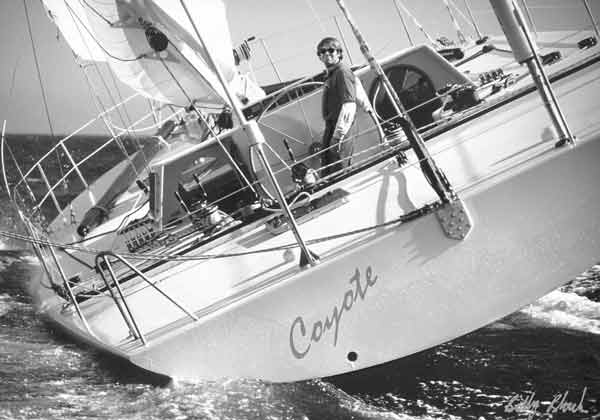 When Minnesota native Mike Plant entered the Vendée Globe, a legendary around-the-world sailing race, he had already completed three solo around-the-world races. He had beat competitors with more experience and with far more funding. To win, Plant had sailed through hurricanes, navigated six-story waves and survived an Indian Ocean capsizing in 45-foot seas.

In November 1992, Plant had registered for his fourth expedition and in two weeks time was to set sail from France with his competitors. When Plant’s boat, Coyote, went missing in the mid-Atlantic, the sailing world held its breath.

Now, twenty years later, the mystery and tragedy is unraveled.

In Coyote Lost at Sea: The Story of Mike Plant, America’s Daring Solo Circumnavigator, author Julia Plant exposes some of the underside of her brother’s hero worship. It’s a fascinating read. Her diligence to understand precisely what happened to her brother adds a deeply emotional layer to the story.

Julia Plant walks us through her brother’s life, from a solo trip to South America to secretly thwarting authorities in the Greek isles. Mike Plant epitomizes fearlessness and risk-taking of the highest order.

I had the chance to ask Julia some questions about her book. Thank you to her and to her publishing company for putting us in touch!

Writing a book is a big deal. What compelled you to kick-start the process? Why now, twenty years later?

Mike’s life, even when he was alive, was always worthy of a book. He started to write one several times. I have always wanted to write, and this seemed a perfect opportunity for me. I started writing it within a year of Mike’s death.
The fact that the book has come out only recently has nothing to do with me; I tried to find a publisher for years. McGraw-Hill expressed interest in the book in 2011. They wanted to get it out to coincide with the 20th anniversary of his death, but missed by a couple months.

When conducting research for this book, did you find anything about Mike’s story surprising?

I never knew Mike was the one who actually lit the match that burned down Danceland, and that he knew Jeff (his friend) took the rap for the crime, while he went to Europe to buy a sailboat.

Imagine someone has just finished reading your book. What big takeaways would you like him/her to walk away with?

I admired Mike’s appreciation or love for nature, for the wild places in the world. It was as if he needed to be in those places to feel alive. To many, the southern ocean was/is a frightening place, and Mike understood that it was scary there, but he also wanted to be there, because it was wild, devoid of mankind, and beautiful. In some ways, the absence of man’s presence, allowed it to be beautiful. I think that if more of us felt that way the world would probably be a better place.

The obvious takeaway is that Mike proved how much a person can do if they make up their mind to do it, and the reason they can make that decision in the first place, is because they utterly believe it is the right thing to do, and he/she is the person to do it.

Perhaps, the third takeaway would be that sometimes we all need a second chance, and one of the best ways to find that second chance, is in a place where no one knows our past.

Julia, thank you again for your wonderful book and for taking the time to answer my questions.

In 1993, the Plant family launched The Mike Plant Memorial Fund, which honors Mike’s passion for sailing. It offers sailing opportunities for kids who are likely to spend their childhood without ever coming near a sailboat.