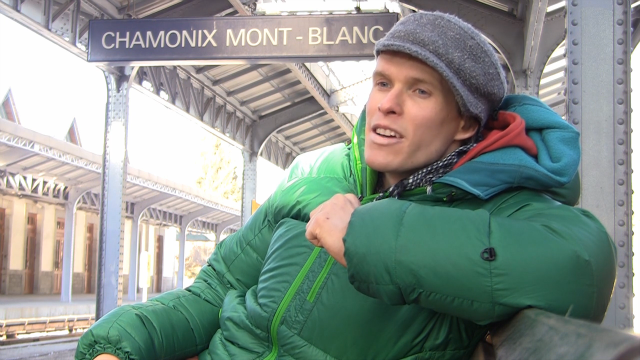 In the summer of 2013, I plan to climb Mt. McKinley, the highest mountain in North America. And when I stand on the summit, I plan on representing Nerve Rush in the triumphant, glorious manner it deserves.

As it stands, this expedition is about 1.5 years away. In the meantime, as I pad my bank account for the necessary gear and logistics, I also begin to think about a training schedule that will optimize my chances at reaching the summit. Standing tall at 20,320 feet, Denali is no easy climb.

Currently in armchair-mountaineering mode, I occasionally find myself browsing the Internet for Denali-related resources. Training programs, trip reports, maps, you name it. Just recently, I stumbled upon something remarkable and definitely Nerve Rush worthy.

Andreas Fransson, a 28-year old Swedish alpinist and extreme skier, has the rare kind of prowess we at Nerve Rush HQ tend to swoon over. Not only is he capable of scaling mountains with world-renowned alpinist, but he’s one of the best extreme skiers in the world, buddying up with the likes of French snowboarder Xavier de Le Rue.

In 2010, Fransson shattered the upper half of his body in the French Alps when a wet-slab avalanche ripped him from his rappel. A year later, in May 2011, he broke new ground with a solo first descent of Denali’s south face, a route called the “baddest unskied line in North America.”

After a month of alpine-style climbing on the mountain, ascending and descending to acclimate and familiarize himself with the route, Fransson took 12.5 hours to descend the 8,000-foot south face of the mountain. Much of this trip was done at night..without a headlamp!

Riding with 177-centimeter Nordica Enforcers, Fransson descended on a precarious and seemingly never-ending surface that featured sections of 70-degree ice.

After returning safely to base camp, Fransson, in true extreme form, decided that the adventure wasn’t done. He took a rest day then climbed Denali’s Cassin Ridge, one of the most famous alpine climbs in the world, in a mere 33-hour round trip push. To lend some perspective, the Cassin Ridge has been climbed in under 36 hours fewer than 10 times. And, following this second successful venture, Fransson skied the Messner Couloir, a 5,000-foot, 45-degree descent. All told, he slept 3 hours in 3 days.

Fransson currently lives in Chamonix, France, a skier’s and alpinist’s mecca in the French Alps. He trains 10 hours a day.

“Society has an absurd general belief that life is about hanging on as long as possible. So people [are] often hanging on for the sake of hanging on and not for really living … I can go on for days about this, but the important things in life are unsayable, so let’s just live it out and see what we find behind the curtains in front of the big game we are all playing.”

Here is a clip of Fransson skiing the Col de L´Aiguille Verte in Chamonix: