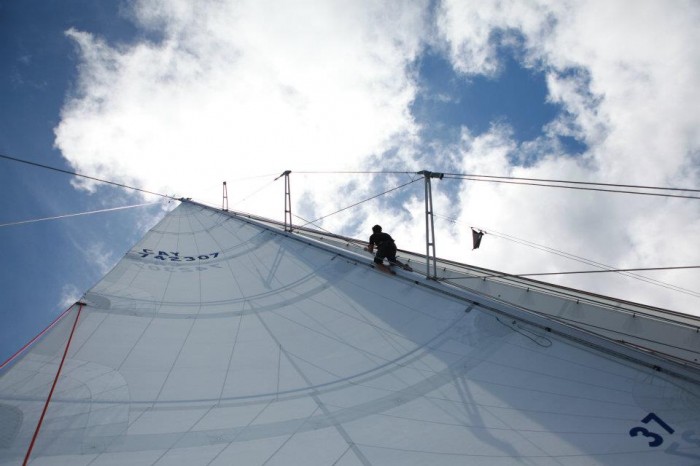 Former graphic designer turned adventurer and motivational speaker, Dave became disenchanted with work and, having recently taken up longboarding, decided to set out on an adventure. One year later, Dave skateboarded his way from Perth to Brisbane–yes, across the entire continent of Australia–received his first world record and book deal and never looked back.

Since then, Dave has paddled 2 of the world’s longest rivers from source to sea, crossed England (and Lake Geneva) by Stand Up Paddleboard, broken a world speed record on a human-powered hydrofoil — I could go on. The man is righteously adventurous.

I’m thrilled and humbled that Dave took the time out of his schedule to chat with us here at Nerve Rush HQ. We asked him a few questions about his Expedition1000 project, particularly his August 2012 plan to swim 1,000 miles of the lower Missouri River.

Until recently I wasn’t interested in doing a swim because I didn’t think I’d see anything, but then slowly I realised I would have a view, just a different one (two inches above the water!). Despite appearances, I’m not totally crazy, so I decided to swim downstream on a river with a decent current, and the Missouri fit the bill.

How long will it take? What do your logistics look like?

I’m not after any records on this one, it’s simply a personal challenge for someone who doesn’t swim so much to see how it feels to be in the water for so long. It’ll take 50 days, 20 miles a day between Yankton, SD and St Louis, MO. I’ll be dragging my own gear on a raft but will also have a team on the water around me. I love trickling down my experience to others so am assembling a team to do everything from still photography to safety kayak, all of them will be paddling the full 1000 miles on canoes, kayaks and SUP. If anyone would like to join the team here’s the link:

Intense, are you doing any training?

Hah! Well, now you ask…. I can’t remember the last time I swam more than 50 metres. I’ve just sailed across the Pacific and didn’t even touch the water. And I’m about to cycle a 4-wheeled bike from Miami to Memphis. I’ll do about a month of basic swimming, but nothing can prepare you for an expedition like the expedition itself. So I’ll take it easy the first couple of weeks and build up my strength. Besides, I figure I’ll be a brilliant swimmer by the end of the trip!

Now, this swim is a part of a larger project you’re working on called Expedition1000. Can you tell us about that?

Sure. If you want to call this a career, my goal is to undertake 25 separate journeys, each at least 1000 miles in distance and each using a different form of non-motorised transport. Along the way I’m encouraging people to get off their butts, to combine sport and travel to stay healthy and get in touch with nature a little more. I’ve not met anyone who spends time outdoors and keeps fit that hasn’t seemed pretty much at peace with themselves, so I figure the more people who do it the better. I’m also aiming to raise £1 million for charity, including the breast cancer awareness organisation CoppaFeel. Great cause, it’s all about giving ourselves as much life as possible.

You’re up to some crazy stuff. Where can our readers follow along with your adventures?