Wreck Diving in the Cold Water of Lake Michigan

The only sound heard over the buzz of the motor as the boat cruised on Lake Michigan was “Everybody’s Got a Cousin in Miami” faintly tinkling tropical beats over the speakers. It was 50 degrees and sunny, but the wind had a leftover winter bite to it eight miles off the Chicago shoreline. The lake was blue and glasslike, clear with 100-foot visibility under the surface, an advantage of emerging early in the season before the algae started to grow. The water sat only 12 degrees above freezing. It was a cold day for wreck diving, even with a dry suit.

“I hope you like Jimmy Buffett,” said Hank Fiene with a shrug to the blaring speaker. His grey hair danced a little in the wind as he looked over his shoulder, leaving both hands on the wheel. “Captain Jim’s crazy about him.”

Captain Jim was a large man with a large personality. He had a tremendous smile and beer belly that jiggled beneath his under armor every time he bellowed a particularly enthusiastic laugh. His backwards baseball hat covered his thinning head of hair and his grey-white beard stood out against his tan face. The sunburned skin on his nose peeled away in places, exposing pink patches underneath. His hands gestured wildly whenever he spoke, which was often.

As the boat slowed to a stop, Jim Gentile started to prepare for Windy City Diving’s first expedition of the season. Two days earlier, on April 14, he’d docked his boat at Burnham Harbor near the Planetarium. With a few grunts, he pulled his tight, black dry suit over his feet and legs, wiggling around as he yanked it over his hips and stomach. He gasped a couple times when he squeezed his head through the neck hole. “I think I gained a few pounds since the last time I wore this,” said Gentile as he tugged at the rubber lining that his large neck was spilling out of.

Wreck diving in the freshwater of Lake Michigan offers a different experience than diving in saltwater. The freshwater doesn’t dissolve wood like saltwater does, giving divers the chance to check out a variety of old shipwrecks. Steamboats from the late 1800s, cargo ships from the early 1900s and one luxury yacht clutter the bottom of Lake Michigan.

The shipwreck the Morais’ set out to visit that day was one that Gentile had sunk for his clients to observe. Gentile bought the Straits of Mackinac, a 204-foot car ferry, for $1 at an auction. First, Gentile, a former Environmental Protection Agency scientific diver, cleaned the ship, removing all of its lead-based paint, lubricants and espestice, an especially important precaution for the 33 million whose drinking water comes from the Great Lakes. Gentile used donations and fundraisers to fund the cleaning process. After selecting a spot and jumping through regulation hoops with organizations such as the Illinois Environmental Protection Agency and licensing with the Illinois DNR, a process that lasted 18 months, Gentile sunk the Straits. 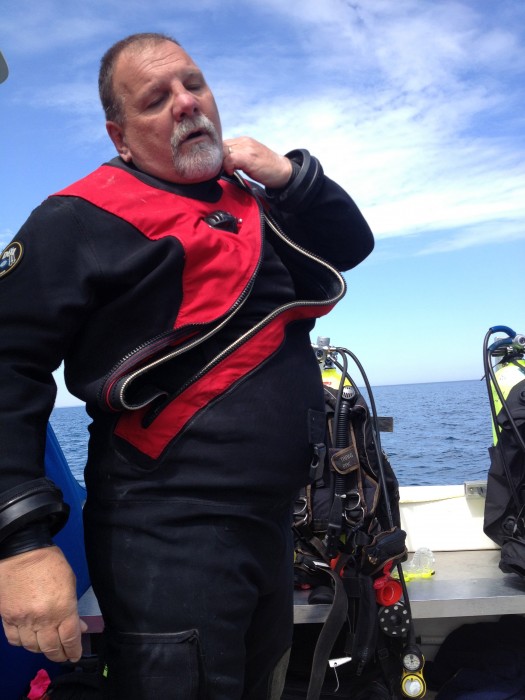 The day they sank the Straits of Mackinac, Gentile and Fiene set out at 5 a.m. They jumped into the icy water and Gentile swam around, scoping the space to make sure the zone was completely clear. The boat sits upright in 82 feet of water and Gentile and the Morais’ dove down to visit her on the 10-year anniversary of her sinking.

Fiene, a long-time friend of Gentile, was along for the ride and to lend an extra hand, rather than diving into the 42-degree water himself. He zipped the captain in and both men went over to assist the first shipwreck scuba clients of the season. The clients were a South African pair. He laughed easily at Gentile’s jokes. She was quiet except for the loud, bright, sparkling blue polish chipping away on her fingernails. They both wore leftover tans from their diving trip in Hawaii a couple weeks earlier. After seeing the tropics, Antonetta, who had never been to the U.S. before, and her husband Frikkie Morais drove Route 66. Their final U.S. stop was Chicago, where they wanted to conquer their coldest dive yet: Lake Michigan.

An Illinois native, Gentile grew up near Lake Michigan. He started diving on family trips to Florida 41 years ago at age 12. The scuba bug bit him. When he turned 16, he got certified. His instructor worked with Ralph Erickson, who went on to co-found the Professional Association of Diving Instructors, a training organization started in Chicago in 1966. It’s now the largest in the world. At the time, the certification process was mostly leftover military training. New divers stood by the side of a pool and tossed all of their gear into the water before diving in after it. The instructors told their students this was a valuable hiding skill to perfect if they were being shot at, an event Gentile doubted he’d encounter in his recreational dives. The entire process took between 12 and 16 weeks.

Today, by watching instructional videos and sifting through readings ahead of time, the process is much faster. Gentile has certified divers in as little as two days. He requires divers to prove certification before jumping into the lake. He no longer certifies clients himself. Instead, he works with other companies in the Chicago area who take care of certification and rent equipment. Then, Gentile leads them into the depths.

Gentile has accompanied visitors into the lake for 17 years. The first year, he took 30 divers into Lake Michigan. The next, he hit 70. Now, each year, he takes over 100 divers down. Depending on temperature, the seasons usually run from April to November, but Gentile loses 20% of the weekends to weather. Once the seas hit three feet, the waters require more skill to maneuver so too much wind is enough to cancel an expedition. The higher the waves, the higher the risk.

Diving in Lake Michigan is different than scuba diving in more popular areas like the Red Sea or Turks and Caicos Islands. The freshwater is less dense than saltwater. Divers need less weight to maintain natural buoyancy in Lake Michigan than they do off the Pacific Coast.

Even without the added weight for denser waters, the Morais and Gentile waddled around the ship in their gear. They moved bags and extra equipment to the front of the boat where it would stay dry. They secured zippers on their bulky suits. They strapped neon tanks of oxygen to their backs. They bounced up and down to stay warm.

To combat the cold water left over from months of Chicago’s winter ice, Gentile requires his divers to wear dry suits if the water is colder than 55 degrees. Dry suits keep water out, which makes for better insulation in extremely low temperatures. Divers need a hearty soul to withstand the 42-degree water he and the Morais’ were plunging into. The cold temperatures require more cumbersome gear. “We tend to look more like spacemen than Caribbean divers,” said Gentile.

Before jumping in, Fiene and Gentile grabbed three pairs of gloves and masks from an orange Gatorade tank of warm water. The scuba accessories steamed like breath on a cold, winter day as the three divers tugged them on. One by one, they plopped into the water. First Frikkie, followed by Antonetta, dropped into the lake. Each plunge sent sparkles of water flying, disrupting the calm lapping of waves. There, Fiene handed each diver a set of goggles, which they secured, grinning through chattering teeth. Finally, Gentile plopped in to join his clients, bobbing next to each other. Each grabbed the rope that would lead them to the bottom and followed it down to the shipwreck. As the cluster of bubbles floated farther away from the boat, the blobs of color blurred more until they blended completely with the dark below the surface. The only sound outside of the gentle lapping of waves was Jimmy Buffett twanging over the speakers.

After about 20 minutes, the trio emerged from the depths. Antonetta popped up first, her goggles filled with blood. The pressure beneath the surface gave her a bloody nose, but she seemed unphased. She shrugged off any concern about the blood and eagerly waved for Fiene to help pull her out of the icy water. Frikkie surfaced next, chattering uncontrollably. Gentile surfaced last with a grin.

All three divers fled from the wind to their dry possessions, quickly stripping off their wet scuba gear. The crew huddled together in the tiny, enclosed front of the ship, munching on Subway sandwiches. Antonetta said she couldn’t wait to tell her friends about the dive. They wouldn’t believe it. Jimmy Buffet returned to the speakers and Frikkie took sips of warm tea through his chattering teeth. It would be quite sometime before he stopped shivering.