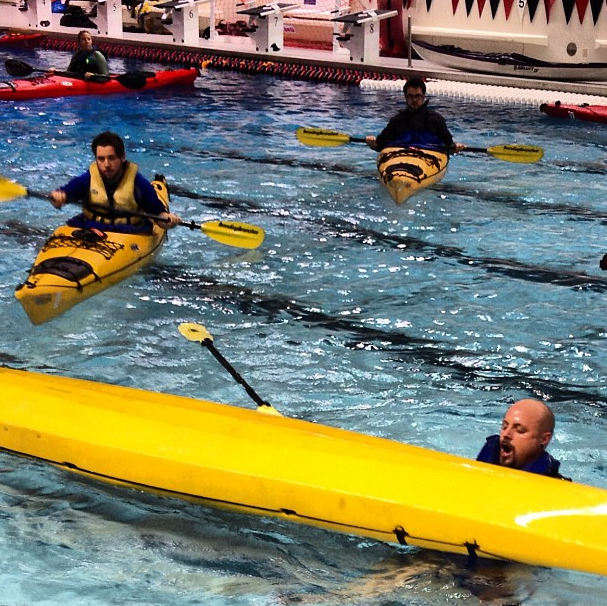 A line of kayakers bobbed like baby ducklings in the University of Illinois, Chicago pool, where just an hour earlier 10-year-old swimmers had raced each other, running laps through the lanes. The smell of chlorine was pungent in the humid air. Brian Westrick herded a group of five into the far corner of a pool. There, he demonstrated the lesson for the evening: slap, drop and roll.

He smacked the water with his yellow paddle, sending drops flying onto his red, long-sleeved T-shirt and light brown hair. Next, he tilted his head away from the paddle in the water in a slow, dramatic movement. Finally, he rolled his hips, moving his weight away from his paddle and righting his tipped boat.

The students, each sporting a life preserver and sea skirt, were there to master their kayaking skills. In Chicago, where Lake Michigan freezes during the long, winter months, kayakers head to the indoor pool to splash around. Some go to perfect techniques, while others just want to keep paddling. Dave Olson’s company, Kayak Chicago, has spent chilly months in the UIC pool for the last 15 years.

On that April evening while rain poured outside, three separate organizations of kayak enthusiasts crowded the pool swarming together. Because all three were heavily involved in Chicago’s kayak community, many members from different groups spotted familiar faces across the pool. Olson’s Kayak Chicago students were there to learn the beginning moves of Eskimo Rolls. His instructors were also teaching Wounded Warrior kayakers, an organization that helps wounded members of the U.S. Armed Forces. Sharon Bloyd-Peshkin, a petite woman with big, blonde curls, helped lead the final group in the pool: the Chicago Area Sea Kayakers Association, a group dedicated to promoting safe paddling and protecting the waterways of the Chicago area.

Chicago Area Sea Kayakers Association member Michael Taylor sat on the sidelines, watching members sign paperwork and zip into life jackets with a constant smile. Taylor, originally a boater, got hooked on paddling when he stumbled upon a kayaking magazine on a long plane ride seven years ago. “Girl, I couldn’t put it down,” said Taylor flashing his bright white teeth. “It was like a bug that bit me.”

Since it was mid-October, a chilly time to launch a boat onto the Chicago rivers or lake, Taylor searched the web for indoor options. He came across Olson’s company and signed up for lessons at the UIC pool. In November, he bought the most expensive kayak the outdoor gear store Cabela’s sold, knocked down from $1,000 to $600 in the off-season.

He never stopped kayaking. Today, he’s president of Calumet Waterway Stewards, a group dedicated to promoting Southland paddling and keeping waters clean for kayaking and canoeing enthusiasts. For his first time back to paddle the pool waters, he dressed in a bright blue shirt in thick black pants. He remembered how cold it was his first season in the chlorinated water seven years earlier.

While Taylor’s fellow Chicago Area Sea Kayakers Association members exchanged greetings on the other side of the pool, Olson’s staff instructed Kayak Chicago and Wounded Warrior students. It was time for them to try the techniques Westrick demonstrated earlier. No one smiled or spoke for at least 10 minutes. One by one, they teetered back and forth, the sides of their boats barely dipping into the water.

After several timid tips, one kayaker, a muscular man with a blue shirt, paddled to the center of the pool. His tattooed arms moved furiously. When he had as much space as he could find, a 10-foot circle of empty water around his yellow kayak, he began to tilt his boat with as much enthusiasm as he’d paddled. Swaying right and left, he dunked his yellow paddle into the pool over and over again. With a loud splash, he flipped his boat all the way over, forgetting to roll his hips away from his paddle as Westrick had demonstrated. Students around him stopped for a moment, watching as his bald head popped up from the pool lane. He glared at his up-side-down boat bobbing next to him.

The onlookers returned to their cautious swaying, but Olson stayed still, watching. His lean body towered out of his bright yellow boat, his dark head of hair growing taller as he strained to see the bold captain of the overturned boat. A smile softened his angular features before he turned his boat and attention back to a middle-aged man splashing, on the verge of tipping himself.

With summer finally here, the rivers and Lake Michigan have warmed up enough for kayakers to hit the outdoor waters. For tours, rentals and lessons check out kayakchicago.com.