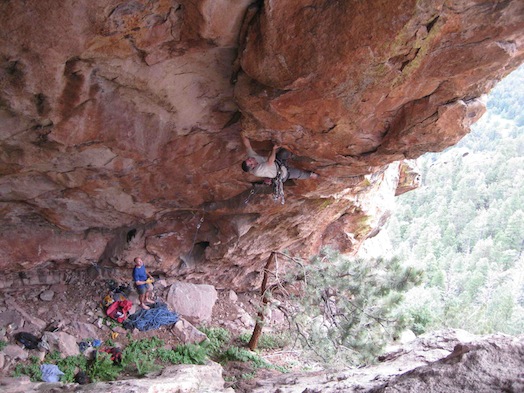 Rock climber Matt Samet, 41, former editor-in-chief of Climbing Magazine, didn’t plan on becoming a writer too. During a break from studying geology at the University of Colorado at Boulder in the early ‘90s, a conversation with his father helped point him toward journalism.

“It’s funny. It’s the kind of thing that only a father could say,” said Samet. “My dad was like, ‘Just think about what happens when you’re 40 and your fingers hurt all the time and you’re living in a van at the climbing area. Is that what you really want?’ And even then, I knew that he had a point.”

Samet, a native of Albuquerque, N. M., went on to study journalism and moved to Italy, traveling across Europe to report on the World Cup and sport climbing.

Samet, an accomplished climber himself, has tackled routes that most rock climbers never touch. He redpointed [successfully completing a climb from the ground without ever putting weight on the rope while pinning all of the safety gear as the climber ascends] difficult climbs such as Zulu, at Colorado’s Rifle Mountain Park. He was the first to complete Chewbacca, a bouldering problem [typically climbs done on huge boulders] on West Mountain at Hueco Tanks State Historic Site in Texas. The feat is so challenging and dangerous that no other rock climber has ever successfully repeated it.

But one of the toughest ascents Samet conquered wasn’t on a rock wall. Throughout his traveling, writing and climbing, Samet said he battled an addiction to prescription drugs.

At age 21, doctors prescribed Samet some benzodiazepine tranquilizers to help him cope with anxiety and panic attacks. Although benzodiazepines, such as Ativan, Klonopin, and Xanax, are often prescribed to treat anxiety, the FDA recognizes the risk of severe addiction to these medications. The FDA warns that withdrawal symptoms of Xanax can include life-threatening seizures. The FDA also says that spontaneous reporting system data suggest that the risk of dependence is greatest for those treated longer than 12 weeks. At one point, Samet took benzodiazepines daily for seven years.

Samet’s memoir tells his story of climbing and addiction. Death Grip is set for release on February 11, 2013. The 300-page book narrates how the author sought out risk, danger and adventure, while at the same time, suffering from anxiety, depression, extreme dieting and a crippling dependency on benzodiazepines.

His drug use was not always apparent to those around him.

“I never knew he was on benzodiazepines,” said Pete Takeda, a fellow climber who met Samet in 1992. “I imagine he was just maintaining rather than being high.”

Samet had been off of all the benzos for about a year when he first started dating his wife, Kristin Bjornsen, in February of 2007, she noted. He was still suffering withdrawal symptoms, such as panic attacks, trouble breathing during approaches to climbs and heat sickness on sunny days, she added. On the couple’s first road trip together to Canyon City, after dating for a month or two, the stress of travel and a new environment aggravated his symptoms.

“He went into a dark, silent state,” said Bjornsen. “I thought it was me, that I was boring him or he was unhappy in the relationship and not having a good time. Over time, I’ve learned not to take it personally, that he just needs space during those times.”

As a writer and editor, Samet said that one of the downfalls of his addiction was that the drugs affected his focus and vocabulary recall.

“When I was coming off of them, I couldn’t form coherent thoughts for a year or two,” said Samet. “You can read Burroughs, who was a junkie, or Bukowski, who was an alcoholic and think, ‘These guys got messed up all the time and sat down to write.’ But I don’t think they really did. I think it was just a literary persona that they adopted. I really don’t think it helps anyone’s writing.”

The benzodiazepines, not only affected Samet’s writing, but they dulled his fear during dangerous climbs, such as Chewbacca in Texas and Primate at the Flatirons, near Boulder, Colorado.

Something that drug addiction and rock-climbing have in common is an increase in dopamine levels, said Michael Bardo, a professor of psychology at the University of Kentucky and the director of the Center for Drug Abuse Research Translation. He said that high-risk takers have a greater release of dopamine in the brain compared to low-risk takers. A stimulating event, such as rock climbing, is an attempt to overcome the under arousal.

Samet said that, throughout his life, rock climbing has helped him cope with anxiety and agoraphobia.

“It’s a fear that you can relate to and understand and, to a large degree, control,” said Samet. “It’s within you to find a solution and push through your fear. Whereas in most other areas of life, scary, weird, creepy things can happen, over which you have no control and often no understanding.”

“He called it Choose Life not for political reasons,” said Lanzano. “But rather because of a decision he made not to climb the route on lead on traditional gear, which would have been extremely dangerous.”

Even though Samet completed Choose Life without falling long before Lanzano, he continued climbing the route with Lanzano, waiting for him to successfully finish.

“Climbers and other more serious athletes have a tendency to be a little self-centered and Matt is not like that at all,” said Lanzano. “Most climbers would have moved on after completing the route, but he still went up to there with me multiple times so I could keep trying. I eventually did it, largely thanks to Matt’s support.”