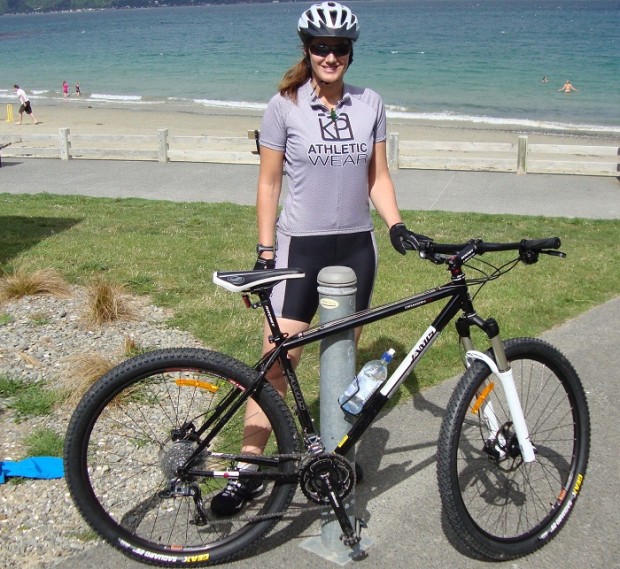 Here at Nerve Rush HQ, we are lucky to have such cool friends. Close amigo, Natalie Sisson, is going to be biking across Africa on the famed Tour d’ Afrique bike race. When we found out she was racing the Tour d’ Afrique and racing almost 6,500km of the race on her bike, we knew we had to have her on the site. I decided to jump in and find out more about Natalie and the race specifically.

I’d like to say it’s my favourite past time, but I’m more of a commuter cyclist, having braved the streets of London, England with a daily 40 minute commute one way, and then again in Vancouver. Canada. I’ve done a few sprint triathlons in the past and the cycle leg of one full triathlon, but nothing quite like this next adventure.

Just under 6,500km on a bike! Can you shine some light into your thoughts behind starting such a massive adventure?

It started with a conversation with a Canadian traveler on a slow bloat through Laos. When you have 8 hours to kill you can cover a lot of ground. We got to talking about this crazy bike tour that goes the length of Africa, from Cairo to Capetown. I was intrigued. I looked it up online and read the details of what was involved. I set myself a goal to do that ride one day.

One day happened to come five years later when I paid my deposit in early 2011 and committed to doing it in 2012. Once I commit to something it’s very rare that I don’t follow through on it. I also like to set myself personal challenges. It started in 2004 when I trained my ass off for 9 months to compete in a body sculpting competition… and won the regional title.

Then in 2007 I broke a world record by dragon boating across the English Channel with the Sisterhood. It felt Iike I was due my next challenge. This one seemed appropriate.

How are you preparing for this incredible adventure?

To be honest, not as well as I should have. In 2011 when I returned home to New Zealand for the first time in 5.5 years I got on a road bike and started training with my sister for a few events. The first was a 48km race, followed by a killer 100km race with some nasty hills.

This was all in the lead up to the Lake Taupo Cycle Challenge. This 160km race around the lake the size of Singapore, saw us in the saddle for over 7 hours. To me that was the best test of whether I could do that kind of distance. When I get to Africa we will ride between 100-180km 5-6 days in a row with just one day off.

Since that road race I’ve been travelling and running my business from the road and it’s really been hard to try and train under those circumstances. You actually need to base yourself somewhere to have access to your bike to ride daily and know routes to take. So I have been keeping fit playing Ultimate Frisbee, running and hitting the gym, but I really need to notch up some serious time in the saddle in these last 6 weeks!

I’ll do that by getting on my new bike I’ve bought or this epic adventure, and start cycling daily, as well as clocking up some longer 3-4 hour rides on the weekends, and building to a few days of riding in a row to get used to how my ass will feel.

Even with all those plans, there’s bound to be some things that come up. What are you most afraid of as you get ready for this race?

I have to say this one excites me and daunts me at the same time, I spoke to a guy who completed the whole trip last year, and he got typhoid from eating lettuce. He got so sick the organziers dropped him off at a hospital and told him to make his own way to Capetown. That part scares me a little. Being left to fend for yourself in a continent I’ve not yet travelled to. From the stories I’ve heard, it’s not one you want to be alone in, especially as a woman.

I guess the mental endurance is something I’m looking forward to testing out. I think I’m pretty tough from years of playing competitive sports, but this is something entirely different. Cycling up to 8 hours a day, pitching your tent, fuelling up on food, and then getting up to do it all again the next day, for 2 whole months is not for everyone.

I also had a friend send me this video clip from YouTube of a rider getting taken out by an antelope during a mountain biking race, I’m kind of hoping that won’t happen to me. Finally I’m adding pressure by attempting to raise $10,000 for Women Win and setting up my business to run without me for two months. That doesn’t scare me but it’s a whole other beast in itself from a preparation perspective.

This isn’t a short trip. You’ll be gone for quite a while. How are you funding all of this?

It is the most expensive trip I have undertaken in my life. The cost of the tour being the main expense at just over US$8,000. All up I’ve estimated it costing around US$15,000.

I am so lucky to have some fantastic sponsors who I approached, and who believed in what I was doing, I broke down my trip costs and they chose to sponsor a segment like bike parts, camping equipment, immunizations. So big ups to Chrometa, MeetingBurner, Unbounce, Six Figure Start and Kaleidoscope Marketing.

KP Athletic Wear stepped up to sponsor me with her own clothing line and GoPro sent me their awesome new Hero 2 HD camera plus bike and helmet mounts for free so I can capture the whole epic journey on video!

The rest I’m self funding as it was my personal challenge. My online business success over at the Suitcase Entrepreneur is picking up the tab :).

Yes I totally am. As a woman who’s played all sorts of sports since I was a kid, I can’t credit the impact playing them has had on my sense of worth, confidence, and naturally my mental and physical abilities. Playing an individual sport or being part of a team has taught me so much in life and in business.

“a world where women and girls are strong leaders and agents of change in their communities.”

I’m doing a whole social media campaign and outreach in order to get maximum exposure for them and to raise $10,000 in donations. This amount could make a huge amount of impact for them. For example, here’s what the following donations can help with:

Where can Nerve Rush readers follow along with your journey? Anything else we should know?

I’d love for you to come visit the ride of my life on my blog. All the details are there, a fun video too and ways in which you can get involved.

In fact you can support my journey by buying a Human Powered Awesome t-shirt of which half the profits go to Women Win, or donate or simply spread the word!

We’re pretty lucky here at Nerve Rush to run into so many people doing so many amazing things. If you know someone participating in some gut-wrenching adventure, send an email to hq@nerverush.com and let us know!