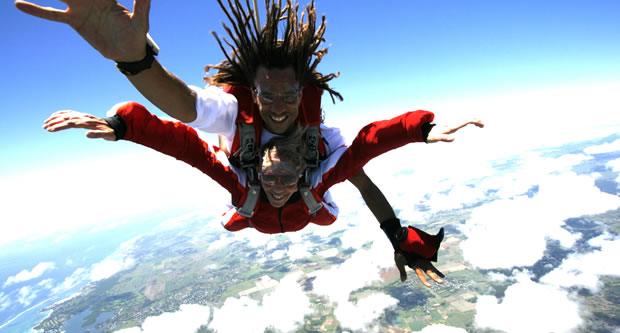 9 of the World’s Most Extreme Jobs

For those who spend their days trapped in a cubicle, the idea of extreme jobs may be too far-fetched to understand, but for those who live for adventure, battling rough waves or traversing cliffs may be considered dream jobs. There are those out there who risk their lives on a daily basis in pursuit of thrill and a paycheck. Here are nine of the world’s most extreme jobs.

Skydiving instructors’ jobs involve much more than falling from great heights. Not only do these professionals have to worry about their own bodies and actions, but they’re also responsible for both teaching and assisting newbie jumpers.

Wages: Outside of owning a skydiving business, the job of an instructor generally leans toward seasonal or part time, earning around $25 per every class taught.

Extreme factor: What could be more thrilling than soaring through the air after jumping from a plane? Skydiving earns extreme job points for the simple act of the fall itself. It also involves the responsibility of another’s life. On average, there’s one death for every 142,000 jumps. 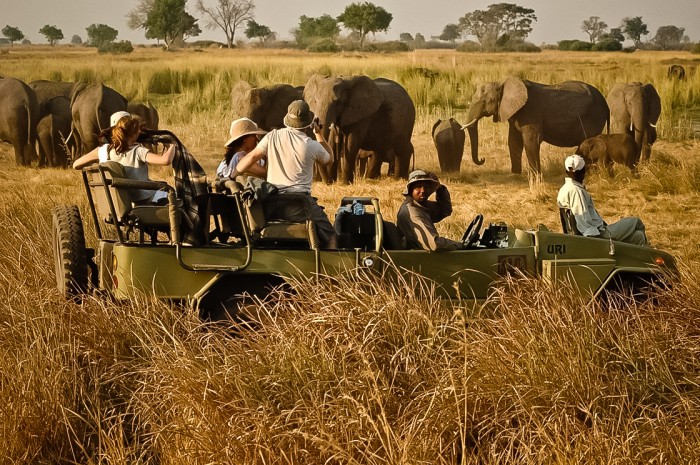 Lions and tigers and bears… Safari guides get to see nature at its wildest. They learn about plants and animals, drive through rough terrain and are responsible for both their own survival as well as that of the group for extended periods of time.

Wages: Wages may vary dramatically, depending on the location of the safari, but the median guide averages $73,000 per year.

Extreme factor: The animals that safari guides encounter are often dangerous, but those in charge are trained to deal with them before hand. The real risks often come in smaller packages, like poisonous snakes or insects. There are also, of course, risks of diseases that aren’t seen in the U.S. 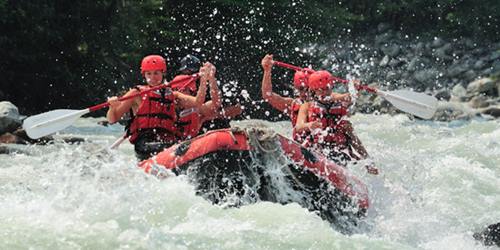 Whitewater rafting guides live a life of true adventure, cruising down wild rapids and steering their way through rough currents.

Wages: Depending on experience, company and location, raft guides often make somewhere between $2,000 and $9,000 per season.

Extreme factor: The extremity of a whitewater guide depends largely on the location and its surrounding rivers. While some guides may lead simple, lazy trips down a calm river, others could be navigating customers through class 5 rapids. As with any whitewater sport, for which the overall fatality rate is 0.87 deaths per 100,000, rafting has its share of danger. 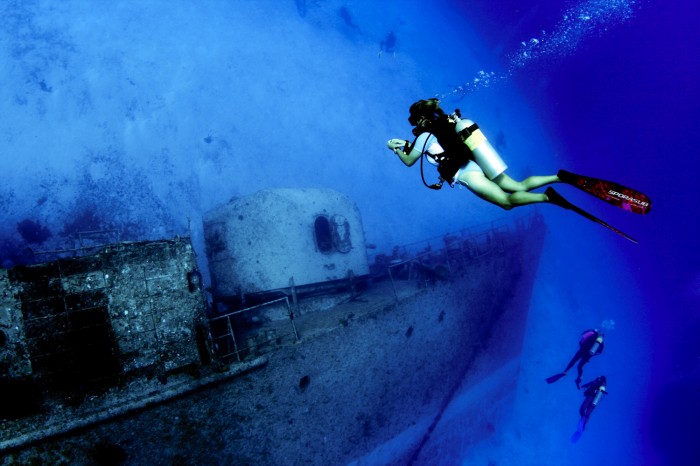 Commercial divers get to experience the great unknown and see creatures most of us will never encounter. Divers may head underwater to inspect, fix or collect artifacts that sit below the water’s level. Some may even conduct experiments or run scientific tests.

Wages: The median income for a commercial scuba diver is just under $48,000.

Extreme factor: As always, with pushing the body to new extremes, come extreme risks. The most common causes of death for divers is equipment failure, heart attacks and mistakes in the ascent or descent. Roughly every 200,000 dives results in at least one death. 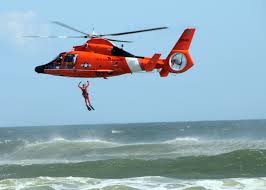 5. Search and Rescue Helicopter Pilots
Outdoor adventurers take risks, often ill-advised ones, and for these mistakes are search and rescue helicopter pilots sent to save those in extreme danger. They may need to save sailors from sinking boats or rescue rock climbers from misjudged climbs.

Extreme factor: These pilots fly into dangerous situations where others have already failed. They must right wrongs and often find themselves in life or death situations that require fast-thinking and skilled decisions. When one of these planes crashes, nearly one third of the accidents are fatal. 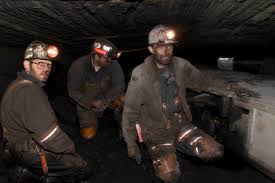 Although definitely not as typically “extreme” as other occupations on this list, miners face some of the highest fatality rates of all outdoor jobs.

Extreme factor: Mining is one of the oldest, yet one of the most extreme professions in the outdoor world. If thought of as almost a form of caving, this makes sense. They risk cave-ins and suffocation on a daily basis. There are over 15 mining-related deaths per 100,000. 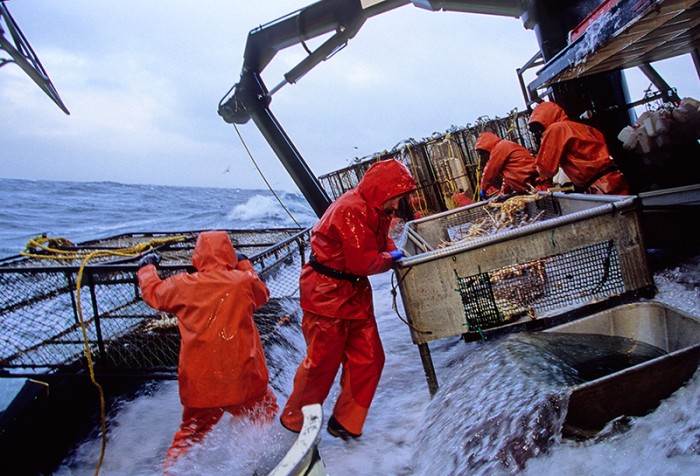 There’s a reason the Discovery Channel’s the Deadliest Catch has been running for 10 consecutive seasons. Whether they’re battling choppy waters or reeling in gigantic catches, the life of a fisherman is rarely dull. It’s also one of the most deadly professions in the U.S.

Wages: For risking their lives on a regular basis, fisherman are a bit short-changed. The median salary for a fishermen is just over $30,000.

Extreme factor: With nearly 95 percent of the country’s salmon supply stemming from Alaska, many fishermen call the Last Frontier home. Alaska’s waters, however, are notoriously choppy and unpredictable, often resulting in massive waves and slick, icy decks. Over 120 out of 100,000 workers die on the job. 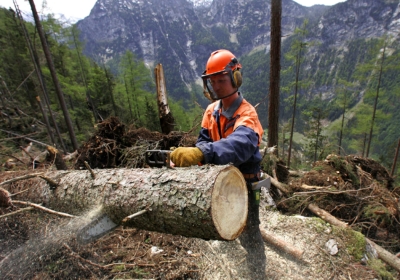 Logging workers, like lumberjacks, are portrayed in folktales as strong, indestructible men like the famous Paul Bunyan with his Blue Ox. The fictional tale isn’t far off base when compared to modern day logging workers. The job demands grueling, manual labor, literally surrounded by risks.

Wages: In today’s industry, logging workers average around $37,000 per year.

Extreme factor: In many ways, logging workers are at Mother Nature’s mercy every single day. They’re surrounded by falling trees and sharp tools, resulting in nearly 128 deaths per 100,000 workers. But it’s not only about strength of overcoming fears, the physical part of cutting down and loading up timbre takes a ton of muscle. 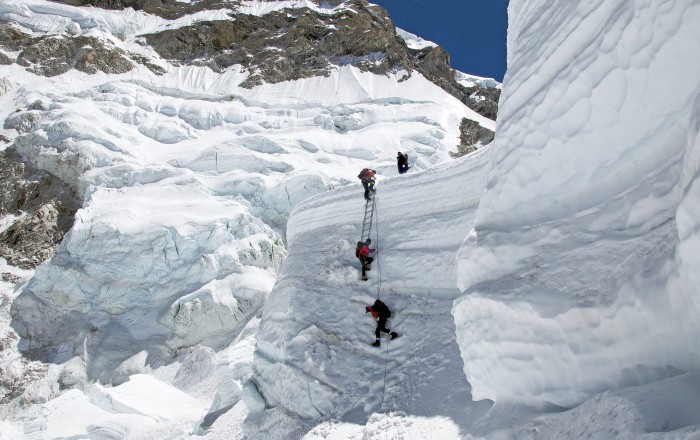 Mountaineering guides lead extreme lives, taking their lives, as well as their groups’ lives, into their hands with every climb, but Everest guides take extreme to an entirely different level. The world’s tallest peak has been conquered by more than 6,000, but has little over a 55 percent success rate for those who attempt it. And when guides lose their way or meet unlucky deaths on the mountains, climbing customers are left to find their own way back to safety, much like Jon Krakauer in Into Thin Air.

Wages: Mountaineers are generally paid by the day, but wages range dramatically based on company, position and mountain and climb they’re guiding. A guide at Mount Rainier may start at $125 per day, but those on bigger, more dangerous mountains, such as Everest, they tend to make more. Climbers pay between $5,000 and $7,000 for a Sherpa guided summit attempt. Western-guides, on the other hand, expect their climbers to fork over somewhere between $45,000 and $65,000.

Extreme factor: Not only must these workers be incredibly skilled mountaineers, but they must also deal with changing weather and altitude adjustments. Often, they need to make split-second, life or death decisions. Fatality rates for anyone who climbs Everest are incredibly high. In fact, there have been over 4,000 deaths of Sherpas, those who are often much more acclimated to the mountain’s conditions, in the past decade. A Sherpa stationed at a base camp on Everest is 10 times more likely to die than a commercial fisherman, making an Everest mountaineering guide the most extreme job in the world.