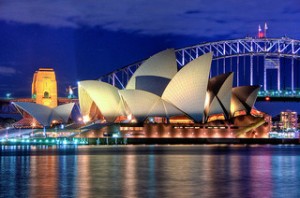 Sydney, the capital city of Australia’s South Wales, and the location of the 2000 Summer Olympics, has a lot to offer in the way of tourism. It’s a world city with a rich cultural background. There is an ongoing rivalry between Sydney and Melbourne for the country’s cultural hub. It’s a breathtakingly beautiful city – you can see the Sydney opera house, Port Jackson, Sydney Harbor Bridge and Darling Harbor.

Less advertised, however, is the rather large extreme sports culture in the city. Since it is situated between a desert and some the world’s most beautiful coastline, there is no shortage of options for the action sport connoisseur. Perhaps one of the more unique options that you have is to go jetpack flying at the Sydney International Regatta Center. Strap on a backpack that shoots enough pressurized water to lift you high above the water below!

Go shark diving at the Manly SEA life sanctuary. (Manly is a city in Australia and, unfortunately, not an adjective which describes the overall testosterone levels of the sea life sanctuary.) If you’re not interested in diving with the sharks, then you could try your hand at kiteboarding on Manly Beach. If you just can’t get enough of sharks, go surfing at Shark Island! It is a tall and fast reef break and is widely known to be one of the heaviest waves in the world. It is a once-in-a-lifetime chance to paddle out into world-renowned surf! Of course, if you are looking for something less extreme, there is snorkeling at Bare Island. Considered to be one of Sydney’s best shore dives (and featured in the movie Mission Impossible II), it is just 16 miles south of Sydney. The visibility can range from 32 ft all the way up to 98 ft! 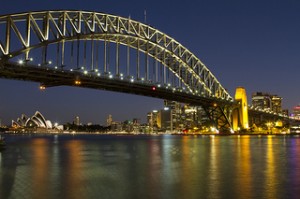 If you’re looking to do something out of the water for a bit, Sydney has a lot to offer. Check out the Ministry of Paintball and unload some semi-auto, bruised paint on a few friends. With over thirty different sites around the area, you’ve definitely got options. Go indoor rock climbing at Climbfit. It is the area’s largest climbing gym and has over 200 set climbing routes, so there will be something for all levels of experience. If you are looking for something more adrenaline-pumping, consider going skydiving with Sydney North Coast. Drop down on the city from over 14,000 feet in the air for a one of a kind view of a one of a kind city.

Sydney, Australia may be tucked away in a far corner of the world, but this city has a lot to offer any action sports enthusiast.