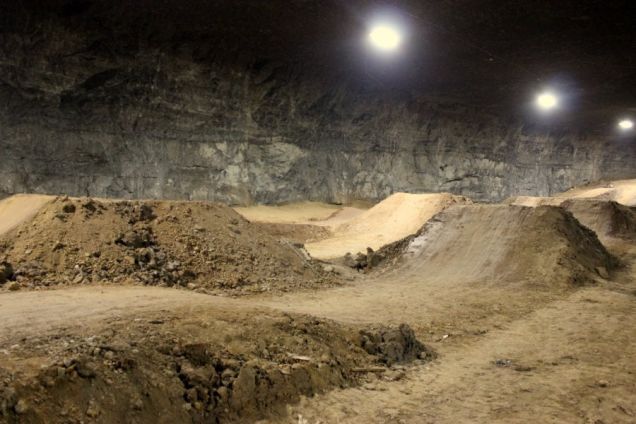 Huge BMX Park Hidden 100 Feet Underground in an Abandoned Mine

Right now, indoor BMX parks are all the rage in cities across America. But obviously, these parks are limited by the size of the buildings they inhabit. How to overcome that constraint? Well, you could find an old limestone mine in Kentucky and built a BMX in its cave-like remains.

That’s exactly what the owners of the Mega Underground Bike Park are doing. Next month, a 320,000-square-foot facility will open, 10-stories below Louisville, Kentucky. It features over five miles worth of interconnected trails, including countless ramps and obstacles. The park’s owners also say this is just the first of three phases in the development of the colossal underground park.

Perhaps the most compelling part of an indoor park the size of the Mega Cavern is how versatile it is—it’s essentially a massive blank canvas, which can be made and remade all the time. The owners say they’re using their own blend of “craft dirt” to build the obstacles.

More wooden ramps are on the way, too, but the designers recently told Outdoor Magazine about why they like dirt so much:

Dirt, you can tear it down and change it in a day, and it doesn’t cost you anything. With wood, every time you tear it down you lose some of the wood, so you have to buy more wood, buy more screws and nails. Dirt is very cost effective.

Shredding it up in a cave full of dirt is about as extreme as it gets. You can’t help but wonder, though: Where did they put the bathroom?

Source: Gizmodo via [BLDGBLOG, Outside]

Latest posts by Alan Perlman (see all)
Posted in: Uncategorized