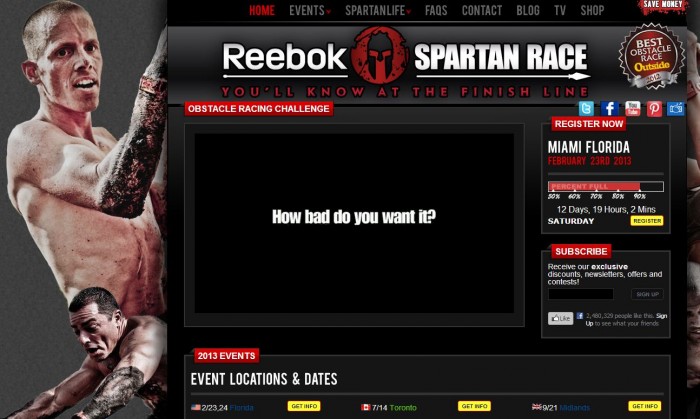 The Spartan Race series recently partnered with Reebok to help bring obstacle racing more legitimacy in the sporting world. The goal here is not to change the way Spartan Race series does their events, but to take it to another level like they did with CrossFit (if you haven’t seen the hot bodies running around at the Reebok CrossFit games you really need to get off the couch…like now). Even with the goal of bringing obstacle racing to the next level, there were people who questioned whether or not Joe and the Spartan camp had sold out. They thought maybe things were going to become more corporate and lose some of the aspects that make Spartan Race series one of the most popular race series out there. Well I am here to tell you that simply isn’t the case.

Having run Spartan races before the Reebok partnership and after all I can see that is different is that Reeboks name is on banners and t-shirts. Outside of that the good folks at Spartan Race haven’t changed anything. It’s still the same high energy, hot bodied, kick your ass race series its always been. If anything the Reebok partnership has inspired the crazies at Spartan Race to up their game where it matters, on the course.

The SoCal Super Spartan in Temecula, CA was the first race since the partnership was announced,and it was a blast. Sure the weather sucked (rain in SoCal even in January is a bit out of place) but it didn’t stop thousands of folks from coming out and getting it done across the 8.5 miles of hills and 29 obstacles (yep 29, that was the official word from the Spartan folks, but honestly it felt more like 40 by the time you were done).

There was the beer garden after you were finished, some food trucks with great pulled pork, loud music, a swag tent in case you needed stuff, oh yeah and men and women in as little clothing as they could get away with out on the course. No big fancy elaborate costumes at Spartan races, there is no room for them. You aren’t doing a mild jog up and down some muddy hills, no sir. People take these races seriously and that suits Joe and his crew just fine since their goal is to get as many people off the couch and moving as they can.

Talking to some of the staff they all feel the same way. They are dedicated to using obstacle racing to change the bad habits of the fast food, easy living, millions in America (and the world) who have let themselves go an don’t know what living life is supposed to be like. Most people are hooked after one race. This race has literally changed lives. It is a kick you in your ass and never let up course that demands your respect and your attention. You will push, pull, cry, beg, and yell your way through a Spartan race. When its over you will understand what they mean when they say:

“You’ll know at the finish line”