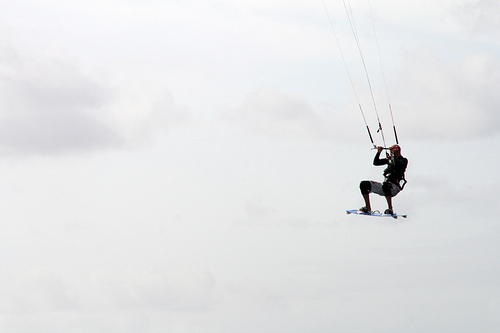 The Evolution of Kitesurfing

We at Nerve Rush HQ are big fans of Kitesurfing. Whether you're learning how to kitesurf or a kitesurfing world record holder, we think kitesurfing has a ton of adventure to add to your love of extreme sports.

But how did it all start anyways? Who came up with the great idea to strap a board to their feet, throw a kite in the air and hope the wind was blowing strong enough to keep them from drowning. Well, today we'll be diving in a little deeper to how kitesurfing came to be and where it started with a new series entitled The Evolution of Sport.

Today's first installment, The Evolution of Kitesurfing is brought to you by Nerve Rush friend and adventurist historian (we literally just made up this title) Thom Wolfe. Take it away Thom.

The Evolution of KiteSurfing

Kitesurfing is a relatively new sport/activity that finds its origin in several different areas. Kites have been around for over 2,500 years, first being used by the Chinese as communication devices. Physical evidence of surfing has been found in Peru dating back as far as 1500-2000 years ago. The design origins of kitesurfing come from traction kites. These kites were used on land to propel a vehicle or person that basically doubled the power of the wind by its design. However, the invention of kitesurfing would hinge on the ability to launch and re-launch the kite directly in the water, something a traction kite cannot accomplish.

The first forms of kite surfing appeared in the 1980s and were referred to as “kite-skiing” and “flysurfing”. Cory Roese

ler developed his Kiteski system with a framed kite, a reel bar, and water skis. You can sort of think of this as water skiing, but instead of being pulled by a boat you are pulled by a kite. This was the first commercially available kitesurfing product released in 1986.

The Legaignoux brothers, Bruno and Dominique were the first to patent a curved wing inflatable kite referred to as the Flysurfer or Wipika system , which is the basic design used in modern kite surfing. These inflatable kites began development about the same time as the Kiteski system, but took 15 years to develop into a commercially available product being released in 1997.

Today, throughout the world there are hundreds of thousands of kite surfing enthusiasts. The first World Cup of Kite Surfing was held in 1998 in Hawaii. Now there are numerous kitesurfing competitions throughout the world on the local, regional, national, and international levels. Many countries and regions now have their kitesurfing associations with the International Kiteboarding Association being the global governing body.

If you're interested in lending your expertise to thousands of Nerve Rush readers a month, let us know. Any and all guest post inquiries can be directed to Joel and Alan at our contact form. Stay adventurous out there!